The ECA is a court of arbitration specialised in sport and more specifically in handball. It has been created by the EHF in 2007 during the 8th EHF Extraordinary Congress with the objective to make available to every sport and handball stakeholder a unique mean of disputes resolution. The ECA with its efficient, simple and independent arbitration proceedings and its thirteen years´ experience has proved to be a serious alternative to civil court proceedings.

ECA and the EHF legal system

The ECA has been officially recognised by the EHF in its Statutes. Cases decided by the EHF legal bodies can therefore be finally referred to the ECA under the condition that all legal remedies available within the EHF have been exhausted. 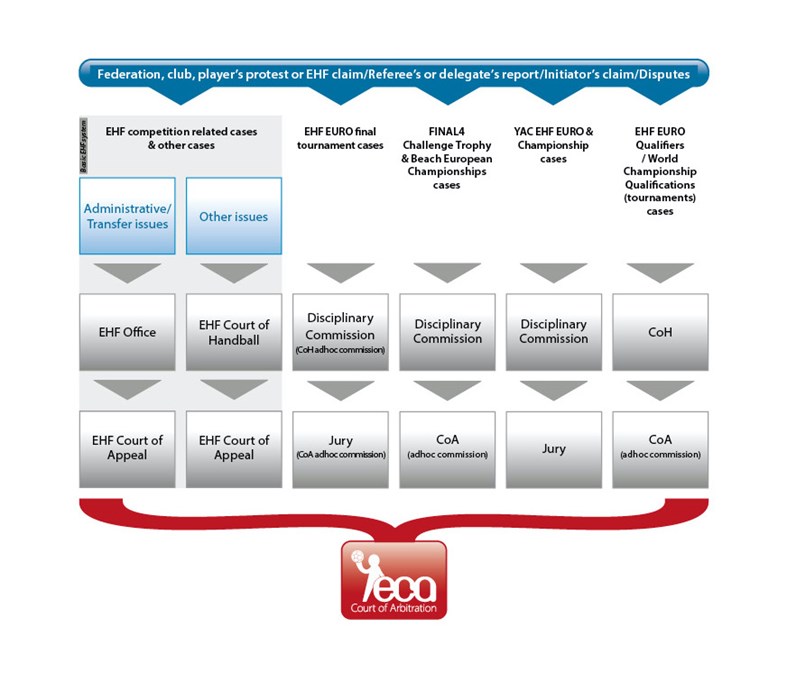 The cases are decided by the ECA through an arbitral chamber of three arbitrators chosen by the parties in the ECA Arbitrators List. The arbitrators included in such List have been nominated by the National Federations, the EHF and the groups recognised as representing the interests of the clubs, the leagues and the athletes taking in consideration their knowledge and experience in the domain of sport, their legal competence as well as their capacity to handle arbitration proceedings in total impartiality and independence.

The arbitrators chosen to form an ECA arbitral chamber shall work in full impartiality and independence without following any directions or representing any party.

This system of free choice by the parties of the arbitrators deciding on their cases has been put in place in order to assure the independence of this Court of Arbitration and its recognition by all members of the Sport world.

The arbitration proceedings within the ECA are dealt with in English.

After a claim has been filed with the ECA Office to refer a certain case to the European Handball Court of Arbitration, each party nominates its own arbitrator from the ECA Arbitrators List. The third arbitrator is chosen also from the List by the two nominated arbitrators. He/She presides as Chairperson over the proceedings. The proceedings may be handled orally and/ or in writing. Upon presentation by each of the parties of arguments, pleadings, communications or documents, the ECA arbitral chamber decides on the case in accordance with the EHF Regulations and the relevant contracts, as far as this does not conflict with the general principles of law and renders a final written award.

Following the EHF Ordinary Congress that took place in Vösendorf/Vienna on 24 April 2021, the EHF Court of Arbitration changed its name for European Handball Court of Arbitration, in order to emphasise its independency and impartiality. The Rules of Arbitration for the ECA have been amended in this regard and are available under this link.

Further information on the ECA procedure can be found in the Rules of Arbitration for the ECA and on the ECA official website: www.eca-handball.com

When bringing a dispute before the ECA after exhaustion of all EHF internal legal remedies, an advance fee of €5.000 applies. Within the frame of any other kind of dispute the advance fee depends on the amount at stake:

The registration fee amounts to €1.000 when the applicable advance payment is €2.500 and to €1.500 when the applicable advance payment is €5.000. This registration fee is not repayable. The advance payments may be refunded to the claimant depending on the decision of the ECA arbitral chamber and the cost of the arbitration proceedings. As a general rule, the unsuccessful party bears the costs of the arbitration proceedings (including in particular the administrative costs and the arbitrators' fees). Such rule may be mitigated by the ECA arbitral chamber taking in consideration the circumstances of the case.

The ECA Council, made up of three members - one President and two Vice-Presidents - and an Office, has been created along with the ECA in order to safeguard its independence and the rights of the parties. One of the two Vice-Presidents is a representative of the stakeholder’s groups (the Professional Handball Board and the Women's Handball Board).

This new Council, besides having a role of representation of the ECA towards the EHF Congress, is mainly responsible for the administration of the new Court of Arbitration, including in particular the following functions:

The ECA Council is currently managed by the following members:

The ECA Office, as part of the ECA Council, has been given the function to look ahead for the arbitrational handling of the disputes by the ECA and to provide an organisational support to the ECA Council and the arbitrators in the view to assure the compliance with the Rules of Arbitration for the ECA, the transparency of the ECA proceedings and the neutral and independent administration of business of the ECA Council.

The ECA Office is also available to answer any questions with regard to the European Handball Court of Arbitration, do not hesitate to contact us:

Rules of Arbitration for the ECA - Statues and Procedural Rules 2.1 MB