Although Györi Audi ETO KC returned to the Hungarian championship throne in the 2021/22 season, their main focus was to take the EHF Champions League Women crown for the first time since 2018/19.

Györ were consistent throughout the season. However, in only seven days, the squad finished as runners-up in the EHF FINAL4 Women and the Hungarian Cup. As Ambros Martin returned as head coach in 2021, Györ's playing style is being reshaped more and more by his ideas.

Most important question: Are Győr still able to return to the top with the current set up?

Ambros Martin has won four EHF Champions League titles with Györ. His huge reputation, as well as his experience, can put the team on the path to success. The star-studded squad is full of hungry and experienced players with a winning mind-set. However, Europe's other top clubs may have understood the secret to Györ's accomplishments.

Managing director Péter Endrődi highlighted Györ facing tough competition this season: "In recent years, Györi Audi ETO KC has always fought for the top goals on the international level. However, we know that we are in a tough group with strong teams that have the same ambitions like us."

Yet bringing back the architects of the club's previous EHF Champions League wins could easily end up with Györ winning in Budapest at the EHF FINAL4 Women 2023.

Under the spotlight: Stine Bredal Oftedal

The Norwegian centre back is the alfa and omega in the attacks of Györ. She is responsible for the key passes, the rhythm and sometimes even the goals. Györ's world-class defence does not rely on Oftedal. However, she is usually the main character responsible for their counter attacks and quick goals.

As Györ start the season with eight Scandinavian players in their squad — including Oftedal — the Nordic handball game plan can be one of the side's strengths. 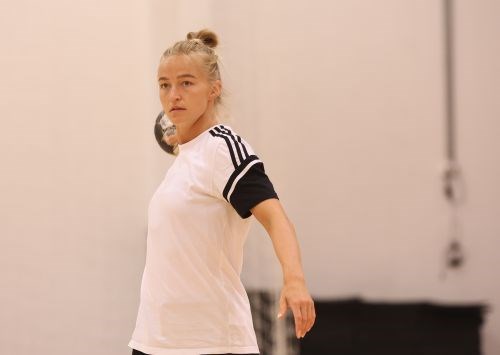 "The biggest honour for a handball club is participation in the most prestigious international cup tournament. We are proud of the fact that our club has been a key member of the competition for years. International matches have a special atmosphere, and it is also important that we can compete with the best teams in Europe from match to match," said Péter Endrődi.

To be the best known promoters of women's handball, Györ need trophies. For trophies, they continuously need to evolve, as left back Anne Mette Hansen highlights. "She said: "My motivation is to be even better than last season — both individually and as a team. And not to focus only on the results but also on the journey we're on."

Györ's opponents in group B all want to beat one of the best teams in the competition. Therefore, it is likely that Györ will meet highly motivated teams.

Just as when she was an player, Anita Görbicz has quickly stepped up on the ladder of sports management. Only one year after retiring, Görbicz became the president of Györi Audi ETO KC, where spent her whole career and won the EHF Champions League five times. She is also the board member of the Hungarian Handball Federation. Regarding good news, the cherry on top is that Görbicz is expecting her second child.

However, this season is also very special for the whole club as they enter their 20th season in the EHF Champions League Women.

GROUP B REVIEW: A tantalising clash ends in a nail-biting finish as Metz beat Györ to remain as group leaders

FEATURE: Györ’s stars, past and present, react to the club reaching a huge milestone in the EHF Champions League Women