Behind the numbers of Bietigheim’s strong start

Throughout the course of the EHF Champions League Women and the Machineseeker EHF Champions League, data analyst Julian Rux will be providing the handball community with deep insights into the numbers behind the game, analysing what the data says about teams' performances.

After just two matches, it is impossible to draw too many conclusions from the statistics when it comes to comparing teams. What can be said, however, is that SG BBM Bietigheim’s start to the season in the EHF Champions League is very impressive.

The team from Baden-Wuerttemberg outscored their opponents by an average of 21.5 goals, which is incredibly good. While they were the favourites against DHB Banik Most in the first match, the margin of victory was still surprising.

The similar result in Sunday’s Match of the Week against FTC-Rail Cargo Hungaria, which was the Hungarian club's largest loss in the competition, was even more surprising. After all, even though the Hungarians had a couple of injured players, they still finished third in the group stage last year and narrowly lost in the playoffs.

With 43 goals scored on average, Bietigheim lead the league. One reason for that is their outstanding shooting. 78.8 per cent of their shots were successful. Last season no team was able to have such a percentage in a single match. 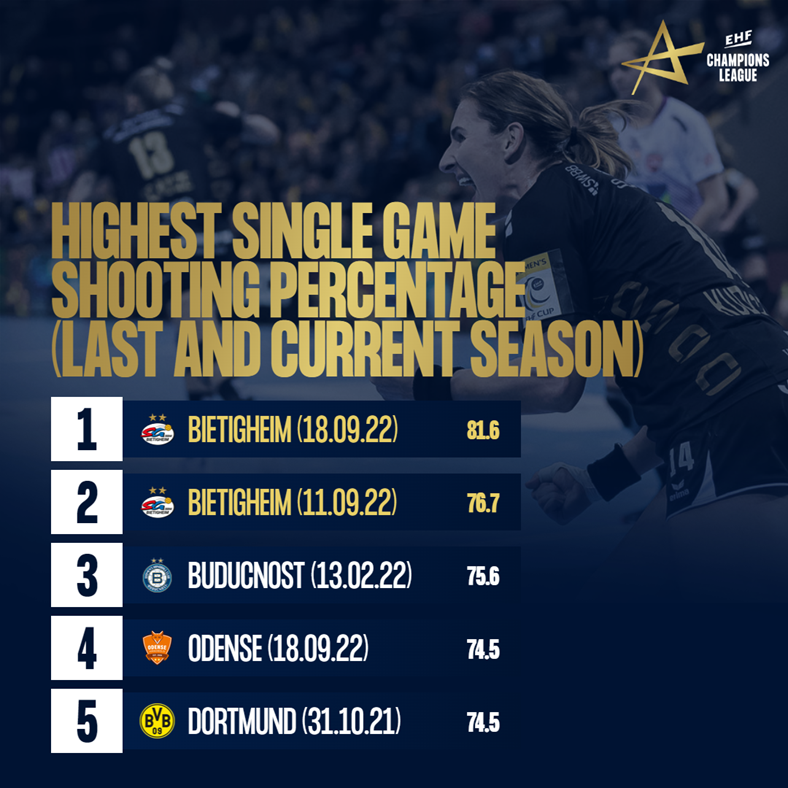 Therefore, Markus Gaugisch’s team obviously has more chances to score. But even their pace-adjusted number of goals per 50 possessions leads the league with an outstanding 34.7, 2.6 better than second-placed Györi Audi ETO KC.

Adjusting their turnover numbers for pace puts their high number of lost balls in a better perspective as well. By the raw numbers, the reigning EHF European League champions have 9.5 turnovers per game, three more than first-placed Györ. Pace-adjusted it’s just 2.1 more than the Hungarians, with 7.7 turnovers per 50 possessions.

On the other side of the field, Bietigheim’s numbers are obviously very good as well. 17.5 goals conceded per 50 possessions is the best number in the EHF Champions League. They force the second-highest number of turnovers (13.6 per 50 possessions) and allow the lowest shooting percentage by their opponents (44.8 per cent).

The latter is, of course, in large parts due to goalkeeper Melinda Szikora. Overall, she has saved 46.8 per cent of all shots on her goal this season. Considering only shots from the field (thus, excluding seven-meter penalties) this number even increases to 51.2 per cent. More than every second shot! That’s absolutely outstanding.

So it's hardly surprising that two of the three best goalkeeping performances regarding field save percentage (at least 15 shots faced) this season have come from the Szikora. Only Sofie Ege's 58.1 per cent last Saturday against Zagreb could outdo her. 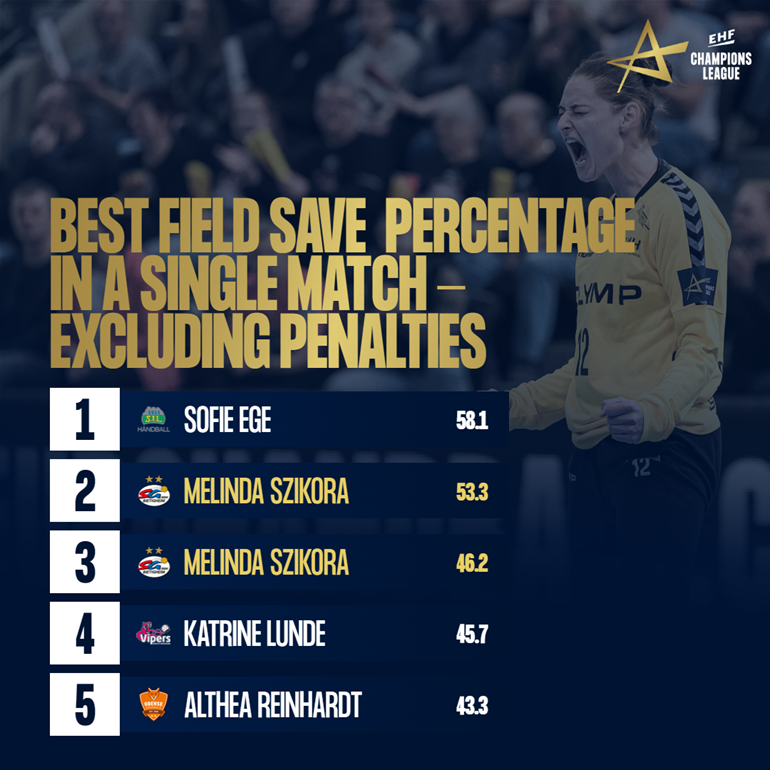 As mentioned at the beginning, statistics are of course very difficult to put into perspective after such a small sample as two matches. Nevertheless, the start of the season is of course impressive. They should reach the knockout phase in any case, but more is also possible, of course.

To achieve more the key points of their success in the first two matches will continue to be important. They must continue pushing the pace, even though it will be impossible to sustain such extremely high numbers of possessions per game. The foundation for this is of course a continued good defence with many forced turnovers and good goalkeepers.

The high pace has resulted in many easy fastbreaks. This, in addition to their ability to get high-quality shot opportunities in positional attack has resulted in their high shooting percentage and very efficient offence. Here, Markus Gaugisch’s philosophy is clearly recognisable. Even though the number of fastbreaks probably will decrease a bit, their offence, which relies more on breakthroughs and close range instead of backcourt shots should still be able to produce high-quality opportunities.

Another good sign is their offensive balance. Even though Kim Naidzinavicius and her teammates scored the most goals, they don’t rely on just one or a few players. Their best field goal scorer, Karolina Kudlacz-Gloc, only ranks 13th with 5.0 goals per game (with an outstanding 100 per cent shooting percentage). Instead, they have seven players that scored three or more goals per game, more than any other team.

Last year, the development during the season was one of the big keys to success for Vipers Kristiansand to win the EHF Champions League. They have shown that a mediocre start into the season can still result in ultimate success as long as one performs at its best in the knockout stages in spring. So Bietigheim definitely still have a long way to go, and a lot can happen. But the foundation does not look bad at all.

Previous Article Kielce out for final revenge in MOTW

Next Article Federations meet for Conference of Presidents and EHF Congress