Another clear win for Ukraine, 30:11 against Luxembourg, helped the side progress to qualification phase 2 of the 2023 IHF Women’s World Championship, while Italy and Slovakia made huge steps towards progressing to the next phase with clear wins against Bulgaria and Latvia.

For the first 30 minutes, Bulgaria produced an excellent game against Italy, taking a 12:9 lead and clearly looking in control of the first leg between the two sides.

In the second half, Italy totally dominated the game and enjoyed a 17:7 run. Goalkeeper Anja Rossignoli made 10 saves to finish with an outstanding 47.6 per cent save efficiency. With a seven-goal lead and the second leg on their home court, Italy will be big favourites to progress to qualification phase 2 of the 2023 IHF Women's World Championship. 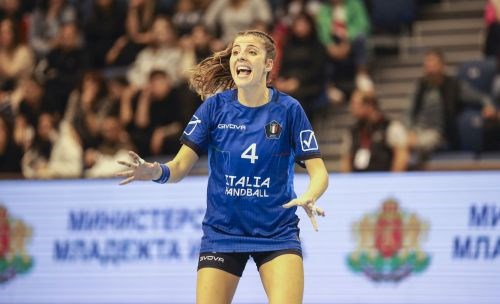 Over the past five years, Slovakia had scored at least 40 goals in a game only once, in qualification phase 1 of the 2019 IHF Women's World Championship, in a 40:15 drubbing of Kosovo.

With Jorge Duenas running a tight ship, Slovakia duly delivered a clear 46:21 win in the first leg against Latvia. Slovakia scored the most goals in a game since beating Cyprus 51:20 in December 2010. Experienced left wing Réka Bízik was Slovakia’s top scorer, with nine goals, and the 25-goal advantage will be more than enough to see them through to the next phase.

After scoring 36 goals on Tuesday in the first leg, also played in Luxembourg, Ukraine did not match that output on Wednesday. But as the hosts' attack produced too many turnovers – 21 – and only 35 shots on goal, Ukraine only conceded 11 goals.

Luxembourg finished with a meagre 20 per cent attacking efficiency, which underlines how much they have to develop. With a clear 66:24 win on aggregate, Ukraine became the first side to qualify from qualification round 1.

Next Article Thrilling goal-fest ends with a draw in Kiel

PREVIEW: Qualification phase 1 of next year’s Women’s World Championship throws off this week

TALKING POINTS: The defending champions became the first team to win the World Championship three times in a row

QUARTER-FINAL PREVIEW: It has been a strong event for Europe’s top national teams at Poland / Sweden 2023

ROUND REVIEW: North Macedonia were the only European team not to progress to the main round of the 2023 IHF Men's World Championship

Six Respect Your Talent alumni to feature at Poland/Sweden 2…

FEATURE: EHF’s “Respect Your Talent” programme has six alumni taking part at the 2023 IHF Men’s World Championship, which is unfolding in Po…

17 European nations prepare to compete for the 28th IHF World Men's Handball Championship, held in Sweden and Poland on 11 to 29 January 202…