Trophies for Barça, Veszprém and Kielce; Kiel hit by injuries

In only 11 days, the EHF FINAL4 Men 2022 will throw-off in front of up to 20,000 fans in Cologne's LANXESS arena. The participants and the semi-final pairings are known, and millions all over the world are eagerly awaiting the pinnacle event in the world of club handball.

On Saturday 18 June, Telekom Veszprém HC will lock horns with Lomza Vive Kielce in the first semi-final at 15:15 CEST, followed by the clash between THW Kiel and record winners Barça at 18:00 CEST (both live on EHFTV).

Before the same teams that participated at the EHF FINAL4 in 2015 enter the court in Cologne, eurohandball.com had a look at the current situation of the four teams, including injuries and the titles that they have already won or missed this season — here is the update:

Just before the EHF FINAL4, all players are back on track for the defending champions. After several months out injured with a torn ACL, Portuguese line player Luis Frade made his comeback, and another line player — Ludovic Fabregas — is back after an appendix operation, which had ruled the French Olympic champion out for almost a month.

With both players on-board, coach Carlos Antonio Ortega has huge variety in this position, as Tunisian line player Youssef Ben Ali, who scored five goals in the quarter-final second leg against SG Flensburg-Handewitt, is also available.

In terms of domestic trophies in the 2021/22 season, no other team in Europe will be able to top Barça. Barça beat Bidasoa Irun 37:29 in the Spanish Cup final on Sunday. Barça also won the Asobal League Cup for the 19th time in total and the 11th consecutive time. After winning the Spanish league with 28 victories from 30 games, the Spanish Super Cup and the Catalan Super Cup and the King's Cup, it was the fifth trophy for the record EHF Champions League winners. 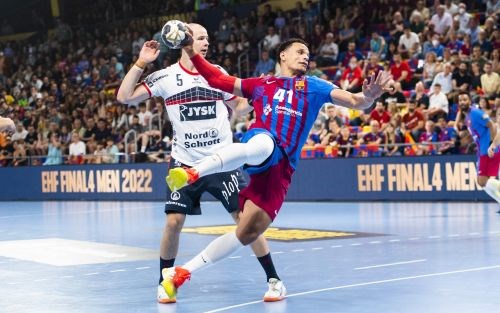 None of the other EHF FINAL4 participants have been hit harder by injuries to their top stars than THW Kiel.

Firstly, defence specialist Hendrik Pekeler, named as the defender in the EHF EURO 2020 All-star team and MVP of the EHF FINAL4 Men 2020, was ruled out for at least six months after tearing his Achilles tendon in the EHF Champions League quarter-final against Paris Saint-Germain. As a replacement, Kiel signed 40-year-old Norwegian line player Bjarte Myrhol, who had originally ended his career in 2021.

On Sunday, during the 29:22 win against HSV Hamburg in the German Bundesliga, Kiel were hit again when top star Sander Sagosen twisted his foot and broke his ankle. Sagosen will be out at least until the end of 2022. "It is a brutal shock for us to lose two of our key players in such a short period and right before the season reaches its climax," said coach Filip Jicha.

After winning the German Cup final against SC Magdeburg, Kiel failed to defend their title in Bundesliga, as Magdeburg won their first championship since 2001 last week. Kiel are in second place, two points ahead of Füchse Berlin, and they have two tough league matches against former EHF Cup winners Rhein-Neckar Löwen and Frisch Auf Göppingen before the EHF FINAL4. Second position is enough to qualify for the EHF Champions League again, but it will be a challenge for Kiel without Pekeler and Sagosen.

In contrast to Kiel, Telekom Veszprém have almost all of their players fit for Cologne. Veszprém have already won the Hungarian Cup, after eliminating their major rivals Pick Szeged in the semi-final and an easy-going final (42:19) against their local rivals Veszprémi KKFT.

Currently, Veszprém are contesting the finals of the Hungarian league — hoping to bring the trophy back to Lake Balaton after losing to Szeged a year ago. Thanks to a buzzer-beater from Yahia Omar, Veszprém won the first leg at Szeged 29:28, so it looks good for the team of head coach Momir Ilic. The second leg will be staged in Veszprém on 11 June. 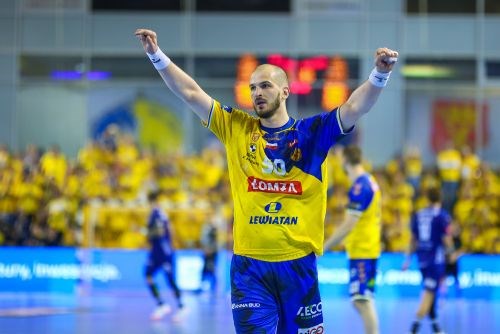 Only Icelandic right wing Sigvaldi Gudjonsson is currently missing from Kielce's squad. But even with almost the whole squad ready, the EHF Champions League 2015/16 winners lost 34:27 on Saturday in the the Polish Cup final against Orlen Wisla Plock, after Vive had won this competition every year since 2009.

Regular assistant coach Krzysztof Lijewski was Kielce's head coach in the final, as Talant Dujshebaev is currently suspended from domestic matches. Two weeks earlier, the Polish league had a happy ending for Kielce after a true thriller.

Kielce's final league match against Plock ended in a 20:20 draw — and a penalty shoot-out was needed to confirm the Polish champions. After a 5:3 win in the shootout, Kielce claimed their 19th Polish championship.

SUMMARY: Coverage of the eight matches in round 3 of the Machineseeker EHF Champions League 2022/23 group phase

On court “no brotherly love” between Janc siblings

FEATURE: Slovenian brothers Blaz and Mitja Janc play against each other for the first time when Barça meet Celje on Thursday

This is me: Thierry Omeyer

THIS IS ME: The French legendary goalkeeper reflects on his illustrious career in his own words

GROUP B REVIEW: The team was the star when the Polish side took a crucial 30:28 at the previously-unbeaten hosts