The group phase of the EHF European League Men 2022/23 has reached the halfway point, with five of the 10 rounds scheduled for this season having already been completed. There were twists and turns, but the main point is that only three teams have an immaculate record in the group phase.

Two of them – Füchse Berlin and Montpellier HB – are teams that were touted as big favourites in the competition just before the start of the season, but the third one, RK Nexe, needed a huge comeback in qualification round 3 to ensure their participation in the group phase.

There are surely other sides who are vying for a spot in the knockout rounds, but in our latest instalment of the EHF European League Men power rankings, let us take a look at the sides that have impressed in recent weeks.

The Portuguese powerhouse club found themselves in a difficult position after suffering painful away losses against RK Nexe and Fraikin BM. Granollers in their first three matches.

However, Sporting rely once again on the excellent Mota da Costa brothers. Francisco and Martim contribute equally for the side, and they have both scored more than 30 goals in the group phase. Sporting are only fourth in group C, but they have won two games on the trot and will face Nexe, Granollers and Skjern at home. As Sporting have won both of their home matches so far, this is a huge boost.

The start of the season was not ideal for Ystads, especially in their domestic league, which they won last season, as they were engaged in the relegation battle after the opening five rounds.

Having shaken off their rust in the domestic league and in the EHF European League Men, Ystads are one of the in-form sides of the latter competition, with three wins in a row.

Backs Jonathan Svensson and Kim Andersson have been nothing short of superb, combining for 65 goals in the first five rounds, with Andersson especially brimming with excellence. The 40-year-old right back is still delivering vintage games, like the six-goal outing in the Swedish side's win against Flensburg. 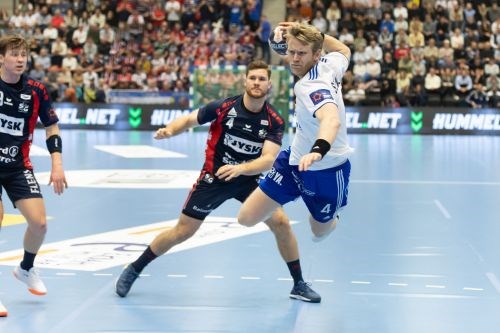 The Danish side were unbeaten after four rounds before suffering a loss against group leaders Füchse Berlin in the last round, 30:24. They have also only played one game at home in group D, which bodes well for their prospects, as they are in second place and have a seven-point lead over HC Motor in fifth place.

A young side, they are led by the next best thing coming out of Denmark’s excellent youth pool: Thomas Sommer Arnoldsen. The All-Star centre back of the M20 EHF EURO 2022 has delivered excellent performances throughout the competition, with 33 goals in five games.

The Swiss side surely have been one of the surprises of the competition so far, despite boasting an experienced roster, led by 36-year-old Spanish centre back Joan Cañellas, who is the team's top scorer.

After a 30:28 home loss against Montpellier in the first game of the group phase, Schaffhausen have been getting better and better results, as underlined by one-goal wins against reigning champions SL Benfica and German side Frisch Auf Göppingen in their last two matches.

Flensburg could have placed higher in this instalment of the power rankings, but an unexpected loss against Ystads made Flensburg drop a few places. The German side are undoubtedly one of the clear favourites for the trophy, but they have struggled to win games.

While their experience is second to none, they have been also hit by injuries in recent weeks. Yet with Jim Gottfridsson and Magnus Rød returning, everything seems in place for Flensburg to win group B, as they hold a two-point advantage over PAUC Handball and Ystads.

In the previous two seasons, left back Halil Jaganjac scored 211 goals in the EHF European League Men for RK Nexe, an enormous achievement. So when Jaganjac left the Croatian team to move to Rhein-Neckar Löwen last summer, it looked to be game over for Nexe at this level.

In qualification round 3, Branko Tamse's squad lost the first leg against Polish side KS Azoty-Puławy, 32:26, only to bounce back in the second leg, where they took a 37:25 win. From that moment on, it was plain sailing for Nexe, who have won their first five games in group C.

Nexe boast the second-best attack in the competition, with 173 goals, 35 of which were scored by Montenegrin wing Fahrudin Melic. Count Nexe out at your peril — they are here to try and reach the EHF Finals Men for the second year in a row. 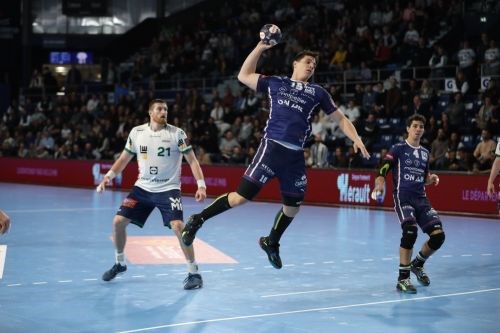 Montpellier, a club familiar with the heights of the Machineseeker EHF Champions League, were earmarked as one of the favourites to win the EHF European League Men this season. With the likes of Valentin Porte, Diego Simonet and Hugo Descat in the team, their experience and roster depth is nothing short of superb.

Until this point, Montpellier have delivered on their expectations, securing five wins in five matches, and they have a two-point lead over Kadetten Schaffhausen in group A. Montpellier also have the third-best defence in the competition, with 140 goals conceded, and the third-best attack, with 171 goals.

And the winner is… Füchse Berlin! The German club have already won the second-tier European competition twice in recent years, in the 2014/15 and the 2017/18 seasons, and they are now primed to add another piece of silverware to their cabinet.

Füchse scored the most goals – 179 – and conceded the fewest – 134 – in the first five matches of the group phase. They are on a five-game winning streak and the 30:24 win over Skanderborg-Aarhus in the last match only confirmed their excellent form.

Füchse also boast the top goalscorer of the group phase, Montenegrin left wing Milos Vujovic, who has 39 goals under his belt, an average of almost eight goals per game. And key right back Mathias Gidsel has been missing due to an injury. When Gidsel returns, they will be very, very hard to stop if they continue in this way.