Kosovo, Austria and Portugal all took big steps towards progressing to the next phase of qualification for the 2023 IHF Women's World Championship with crucial wins on Thursday evening.

However, the other tie is still open after Greece mounted an impressive comeback in the last 10 minutes to record a 23:21 win against Bosnia Herzegovina in Cazin.

Before the match against the Faroe Islands, Kosovo had never won a game in the qualification phase for the IHF Women's World Championship, riding an eight-game losing streak, dating back to December 2016. But the uptick in form proven in the EHF EURO 2022 Qualifiers, when they secured wins against Cyprus and Luxembourg, was confirmed in a historic night in Istog, when they secured a superb win against the Faroe Islands. Buoyed by a nine-goal game from Leonora Demaj, Kosovo never looked back and took a huge step towards progressing to the next phase, with the second leg of the tie scheduled for Saturday, also in Istog.

Qualification is on a knife's edge in this tie, as Greece mounted a hearty comeback in the dying minutes of the game to cancel Bosnia’s advantage and emerge victorious in a crunch first leg. With both games played in Bosnia Herzegovina, in the Sports Hall Cazin, the hosts will have their chance to turn the tables on Saturday. However, they will need a strong defence, like the one they displayed in the first half, to have a chance of progressing to the next phase for only the second time in history – after losing against Hungary in the European play-offs in 2002.

Austria and Slovakia were the two teams entering qualification phase 1 of the 2023 IHF Women's World Championship having featured at the previous edition of the tournament and both secured clear wins in their home matches. While Slovakia clinched a 46:21 win against Latvia, Austria could only seal a 37:22 win against Finland, but they displayed their experience with a 12:2 run to finish the match. Goalkeeper Petra Blazek shut down the Nordic side with nine saves for a 47 per cent save efficiency in the first half, while left wing Nina Neidhart and centre back Sonja Frey combined for 15 goals, lifting Austria to a clear win that enables Herbert Müller's side to dream once again of a World Championship berth. 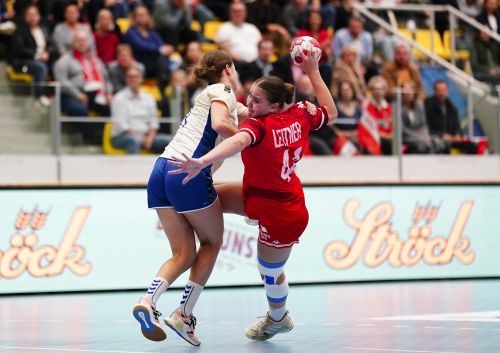 With both games of this tie played in Portugal, there was little Azerbaijan could do to limit the damage against the hosts in the first leg. Portugal gave meaningful minutes to all players, securing only their sixth win in the qualification phase for the IHF Women's World Championship in the past 14 years, while also avenging a 27:23 defeat against Azerbaijan in December 2012. Only three outfield players failed to score for Portugal in the game, but Azerbaijan's attacking efficiency dropped to 33 per cent at the end of the match.

PREVIEW: Qualification phase 1 of next year’s Women’s World Championship throws off this week

TALKING POINTS: The defending champions became the first team to win the World Championship three times in a row

QUARTER-FINAL PREVIEW: It has been a strong event for Europe’s top national teams at Poland / Sweden 2023

ROUND REVIEW: North Macedonia were the only European team not to progress to the main round of the 2023 IHF Men's World Championship

Six Respect Your Talent alumni to feature at Poland/Sweden 2…

FEATURE: EHF’s “Respect Your Talent” programme has six alumni taking part at the 2023 IHF Men’s World Championship, which is unfolding in Po…

17 European nations prepare to compete for the 28th IHF World Men's Handball Championship, held in Sweden and Poland on 11 to 29 January 202…