While Germany vs Netherlands stands for a classic rivalry in many sports, it has become particularly true for women’s handball in recent years.

Especially since Henk Groener, Dutchman and former coach of the Netherlands women’s national team, took over as head coach of Germany in January 2018, his team have met with ‘Oranje’ regularly: they played four test matches and there have been three duels at major tournaments – the EHF EURO in 2018 and 2020 and the IHF World Championship in 2019.

Next week, it is show time again when Germany and Netherlands face each other twice in a double-header of EHF EURO 2022 Qualifiers group 3: on Thursday (3 March) in Krefeld, two days later in Rotterdam.

Netherlands lead the group with four points from two matches; Germany have three points after they unexpectedly dropped a point at home against Belarus. Greece is the fourth team in this group.

One match that set the tone for the rivalry took place on an icy, cold Sunday morning in St. Petersburg when, on 18 December 2005, current Germany national team goalkeeper coach Debbie Klijn steered the Netherlands took a surprise 28:26 win over Germany in the match for fifth place at the World Championship in Russia.

Back then, already many members of the Dutch team played for German clubs. So, they knew each other very well, and even celebrated fifth and sixth place together.

Klijn still lives in Germany and joined Germany’s coaching staff together with Groener in 2018. She also works as goalkeeper coach at German club Buxtehuder SV and was ‘on loan’ with the Dutch team at the 2020 Tokyo Olympics.

Three years after Groener and Klijn arrived at the German federation in 2018, another Dutchman joined them. And right in his first tournament as the youth national team coach, Gino Smits steered Germany to the silver medal at the W17 EHF EURO in Podgorica.

Smits, who previously coached BV Borussia 09 Dortmund, is the father Inger Smits, who plays for SG BBM Bietigheim in the German Bundesliga and is part if the Dutch national team.

A few weeks ago, Smits’ son Kay – a back court player for SC Magdeburg – was the driving force behind Netherlands’ stunning run to the main round at the Men’s EHF EURO 2022 in Hungary and Slovakia.

“This result was surprising, but Dutch men’s handball in general has been continuously improving,” Groener said.

“That is good for handball in general in Netherlands, where only the women have been in the limelight so far. But with players like Smits in Magdeburg or Luc Steins at PSG, the men have also improved considerably in terms of quality.”

Groener, obviously, wants to win both matches against the Netherlands next week, but he is aware the away match in Belarus in April might become the all-decisive game.

A key to success could be team captain Alina Grijseels, who has been named Player of the Year 2021 in Germany. Believe it or not, but Grijseels also has a Dutch connection: her father was born in the Netherlands and a lot of her relatives still live on the other side of the border.

“I have very close ties to the Netherlands. Germany is my home country and I play for the national team here. But the Netherlands is something like my second home. And when we are not playing against them, I keep my fingers crossed for the Dutch women’s team,” Grijseels said.

The Germany centre back expected fifty-fifty games against the Netherlands.

“The Netherlands have a high-quality team, even if the last two tournaments did not go as they had imagined,” Grijseels said.

“What I hope for both games, is a lot of spectators come. That is why I am really looking forward to both games. I always enjoy playing against the Netherlands.” 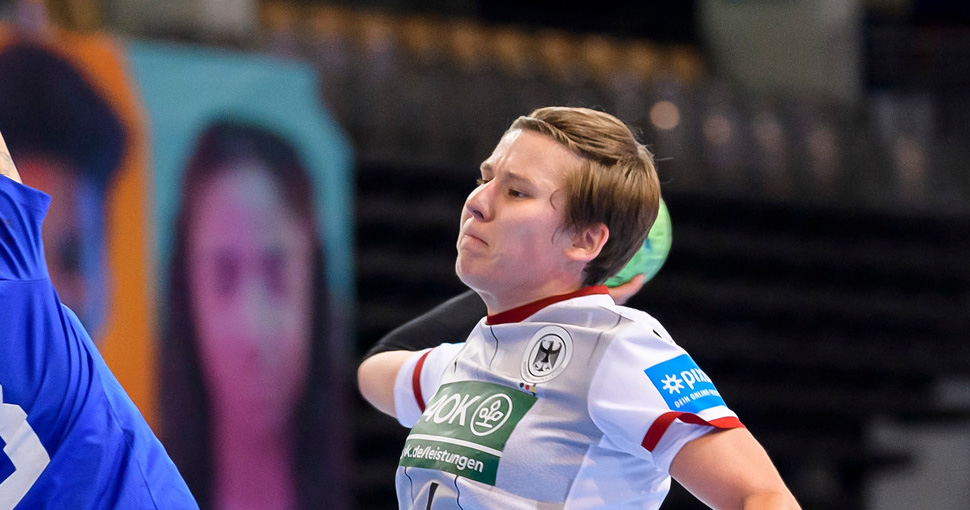 Germany is my home country and I play for the national team here. But the Netherlands is something like my second home. And when we are not playing against them, I keep my fingers crossed for the Dutch women’s team.
Alina Grijseels
Germany women's national team centre back

Playing against the Netherlands over and over again is one thing, in 2025 the German federation will team up with the Dutch when they jointly host the Women’s IHF World Championship.

“A World Championship in your home country is always outstanding, it is a great feeling to know that you are playing in front of your fans,” Grijseels said.

“And for me, personally, the constellation Germany-Netherlands is of course ideal. 2025 is a great goal for our team; until then we have time to grow and then do well.”

A more short-term goal is to book the EHF EURO 2022 ticket. The second match against Netherlands on Saturday will be the 75th between the two countries, with Germany clearly leading the head-to-head comparison with 55 wins, four draws, and 14 defeats.

NEWS: The 16 participating teams for the Women's EHF EURO 2022 have confirmed their official 35-player squads.

Women at the heart of the game: Gordana Naceva’s love for sp…

Women at the heart of the game: Katarina Bulatovic’s pride