Ready, steady, go! The four teams competing at the EHF FINAL4 Women 2022 can start their preparations for the 4/5 June event in Budapest, as they now know which opponents they are going to meet first.

The draw for the semi-finals was conducted by EHF President Michael Wiederer in Budapest on Tuesday and paired Györi Audi ETO KC with Team Esbjerg, while Metz Handball are set to take on Vipers Kristiansand.

The playing times for the EHF FINAL4 Women 2022 have not changed compared to previous editions: 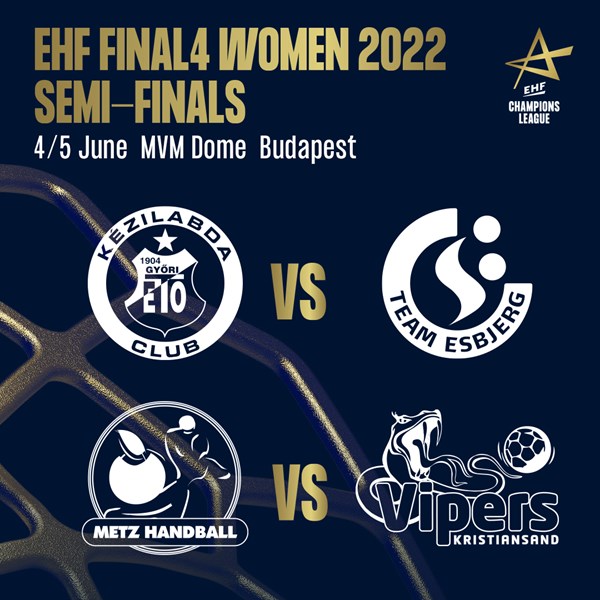 Fodor: "Györ are really hungry for this title"

Györ, the five-time champions, are eager to avoid a similar scenario like last year, when the Hungarian side lost a dramatic semi-final after a penalty shootout against Brest Bretagne Handball, the team they have defeated in the quarter-finals this season.

"Last year we couldn't win, so we are really hungry for this title," Györ left wing Csenge Fodor says.

Asked about the upcoming opponents, Fodor is full of praise for Esbjerg.

"It will be exciting. They are a really good team. They run a lot, so we need to practice for that. We are in a good form so I hope we can keep this level until the final."

Reistad: "Esbjerg can beat everyone"

Esbjerg have stolen many hearts this season with their positive spirit and successful run through the competition, which earned them top spot in group A and, ultimately, a first entry ticket for the EHF FINAL4.

And now... against Györ!

"Of course, my first thought was: 'It is going to be tough.' But even if we had met one of the other teams, it would also be tough," says Henny Reistad, who won the title with Vipers last year and became MVP of the EHF FINAL4 2021 before moving to Esbjerg.

While her Danish team will be debutants at the event, Reistad has been there and done that.

"I hope I can help them with some things. It is a new arena, even bigger," she says. "The most important thing is to remember that it is just a handball match. If we play as well as we have done in some matches this season, we can beat everyone." 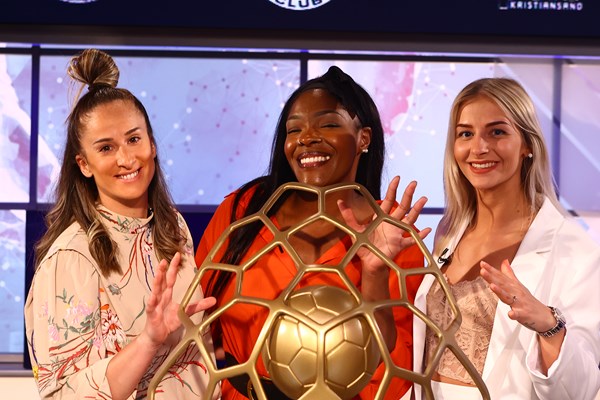 Sako: "For Metz, everything is possible"

The winners of this semi-final will face no easy task, either, the following day, as Metz and Vipers are set to contest the other semi-final.

Qualified for Budapest for the second time, Metz are looking to better their 2019 result, when they ended in fourth upon their debut at the event.

After sitting out the quarter-finals, the French side is ready to rock in Budapest.

"We had some time to rest, that is an advantage," says Metz goalkeeper Hatadou Sako, who unfortunately will miss the EHF FINAL4 next month because of an injury.

"Vipers won it last year, but everything is possible during these two days," Sako adds.

Pena: "For Vipers, this is another story"

Nerea Pena can't agree more. Having switched from Esbjerg to Vipers before this season, the Spanish back faces a duel with Metz in the semi-finals.

"What was last season, was last season. There are six, seven new players in the team so this is another story," Pena says about the changes at her Norwegian team.

They were the surprise champions last year, but now Vipers hope to become only the second team to win the EHF FINAL4 multiple times in a row.

"It is a semi-final and at the EHF FINAL4 anything can happen," says Pena, who lost with Vipers twice against Metz in the group phase this season.

"Playing during the season is different from playing at the end of the season," Pena says. "This is one match and, to be honest, I hope the best team wins."

While the EHF FINAL4 Women has been staged in Budapest each time since its inaugural 2013/14 season, something is different this year: the majestic MVM Dome, opened only last December, will play the fitting host to the annual marquee event in women’s club handball.

DRAW PREVIEW: The four title contenders Esbjerg, Györ, Metz and Vipers will find out their opponents when the pairings are set on Tuesday

NEWS: Match on Saturday 4 June in Budapest starts at 15:15 CEST, followed by Metz playing Vipers in second semi-final at 18:00 CEST