“I do not want to be considered a young player anymore.”

A few minutes into our interview, Melvyn Richardson has set the scene. Despite being 24-years-old, the left-hander, who lifted the EHF Champions League trophy with Montpellier in 2018, has strengthened his intentions by moving to Barcelona this summer.

“I might be young in terms of age but I already have some experience, that I gathered either with the national team or with Montpellier. I do not want to hide behind this excuse anymore when I miss things,” says the Barça recruit.

As of this season, his fellow right back Dika Mem may have been in the spotlight in the EHF Champions League’s first four rounds, with 32 goals scored, but Melvyn Richardson has shone as well.

His 15 goals across the first rounds show how well he has adapted to his new environment. “Of course, the fact that we have four French players in the team makes it easier for me. Barça is a team where you have to win, no matter who our opponent is and I had to be at the right level from day one,” says Richardson.

The recent Olympic champion with France had already lived for five years in Spain as a kid, as his father, Jackson, played in Pamplona for Portland San Antonio from 2000 to 2005. As a consequence, he went to school and already knew how to speak Spanish before landing in Catalunya.

“I still have to practice a little bit, because I lost some vocabulary since then, but I do understand everything that is being said,” he smiles.

“Going abroad as an athlete is always about making things tougher for yourself and going out of your comfort zone. But so far, everything is going great.” 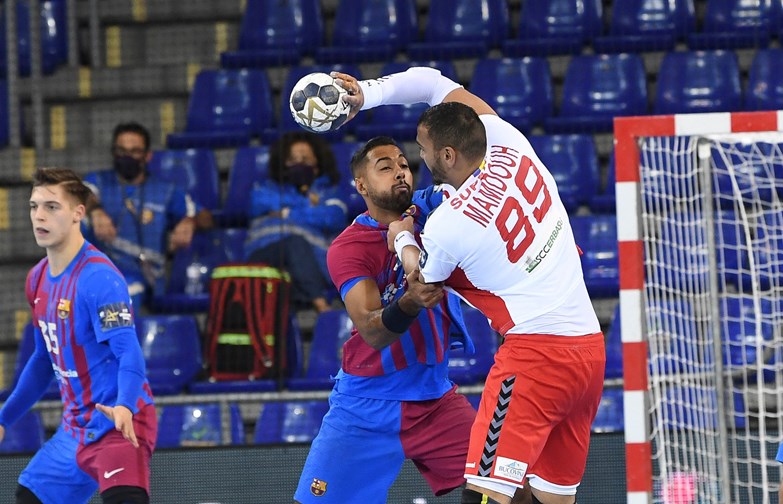 Richardson has taken the time to venture in the city already, helped by his compatriots to find places to visit. For a player that lived for four seasons in Montpellier, Barcelona is not that much of a change in terms of quality of life: “We train a lot, but I have had the opportunity to get out for dinner a couple of times. I know the Spanish culture, I really like it, and this was one more motivation to come here.”

On the court, for his third Champions League game with his new team, Melvyn Richardson experienced a defeat in Veszprém. That was the first time the Spanish side lost a game in the competition in 2021 but according to the former Chambéry and Montpellier player, that was not the end of the world.

“When you look at the names of the teams in our group, making it through without losing one game would have been surreal,” he says.

In round five’s Match of the Week, Barça will host Paris Saint-Germain and this time again, Richardson and his teammates will be aiming for only one thing: the win.

“This is a very important game for us, especially at home. Even though I’m one of those players who think that I’d rather be king of the FINAL4 than of the group phase, beating Paris in front of our fans is the only option for us,” Richardson warns.

Even though he will be facing many of his French teammates in the Palau Blaugrana, there will be no room for feelings on Thursday.

Next Article Spain, Portugal and Switzerland join forces in bid for EHF EURO 2028