For the first time, Molde Eilte have made it to the group phase of the EHF European League Women, where they are looking forward to facing tough teams and high-profile players.

With their first appearance in the group phase of the EHF European League Women, Molde have a lot of exciting things to look forward to in the near future.

Reaching the group phase has been a dream for the Norwegian side for several years. "We are debutants in the group phase and for a club that has only been in the top flight in the national league since 2015, that is really amazing to experience," said Per Gjerde, Molde's club president.

With a lot of transfers in the summer break, it will be exciting for every handball fan to see what power Molde possesses.

The importance and meaning of Molde playing in Europe's second-tier competition should not be misinterpreted. "This is massive for us. It has been an ambition for us in the last three years. Playing at this level is crucial for our development,” asserted Gjerde.

As the president says, there has been a significant development in Molde in recent years. The club was founded in 1961 and has thus played in the Norwegian league system for several decades. And now it will also appear on one of Europe's biggest stages.

Under the spotlight: Sherin Obaidli

Team captain Sherin Obaidli is one of the players who has to get used to EHF European League – an adventure she cannot wait to get started and focus on in the second part of the season. In fact, the national league has become secondary, according the Norwegian line player and captain.

"The European League has the strongest focus for us. It has been a motivational factor for doing the hard work that is needed to compete at such high level,” said Obaidli.

Molde will undoubtedly fight for a great result in EHF European League, but they will not be successful without enduring hard battles and difficult opponents. Quite specifically, there is one single team that Obaidli sees as particularly strong.

"Ikast Håndbold looks really strong at the moment. They are ahead of Odense Håndbold and Team Esbjerg in the Danish League – and they have beaten both. We have an outspoken ambition to be number one or two after the group phase," added Obaidli.

Obaidli and her teammates are ambitious ahead of the upcoming group phase, and they are also looking forward to hearing 2,000 people cheering for them in the Molde Arena. 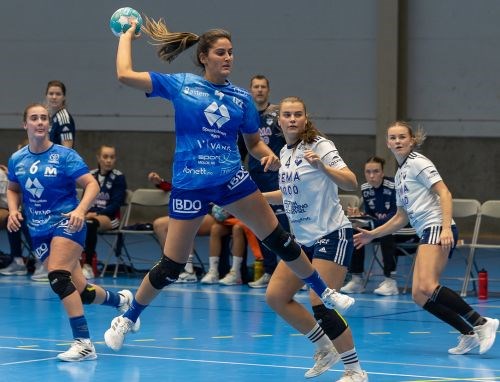 Captain Sherin Obaidli is not the only Molde player with the family name Obaidli. Mona Obaidli, her younger sister, is an important part of the team.

Mona is the highest scorer in the Norwegian league this season, with 62 goals, while Sherin has scored 40 goals. The sisters seem to be very important players for the team in their European adventure in the EHF European League.

Next Article Odense wary of Krim’s strength in MOTW