In 2023/24, the playing format of the EHF European League Men will be undergoing its first major change since the competition was introduced in the 2020/21 season.

In the new competition format, 32 teams will compete in the group matches – eight more than in the current group phase – while a main round and play-offs will be added to the schedule.

The EHF European League has firmly established itself since the competition first saw daylight amid the overhaul of all EHF club competitions in 2020.

Currently in its third season, Europe’s second-tier club competition has been providing high-class handball with entertaining matches culminating into scintillating EHF Finals tournaments that are appealing to fans worldwide.

While the women’s version of the EHF European League remains unchanged, the men’s version will get a new look as of the start of the 2023/24 season.

In its meeting in Luxembourg last week, the EHF Executive Committee has approved a new playing system for the EHF European League Men, which includes the following changes:

Once the competition has reached its quarter-finals, the playing system is identical to the current structure: the four winners of the quarter-finals advance to the season-ending EHF Finals Men. 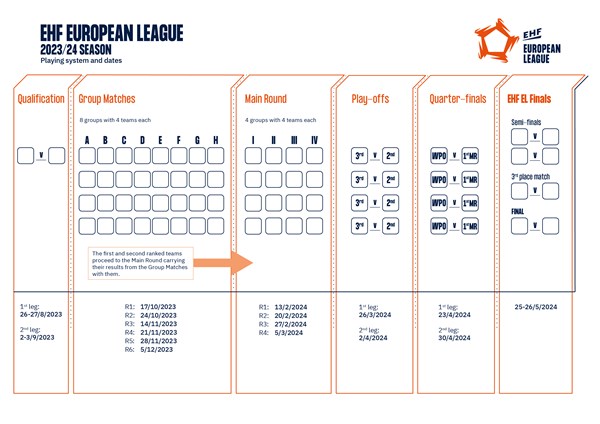 (Click on the image for larger view in PDF format.)

By implementing the new playing structure, the EHF is meeting a request put forward by several club representatives, who asked for more planning time early in the season.

In the current situation, clubs competing in qualification round 2, with the second leg scheduled for the first week of October, only find out three weeks in advance whether they will be part of the EHF European League Men group phase of not.

Eight upgraded teams from the EHF European Cup in the qualification

By reducing the qualification mode to just one round, to be played in the end of August and in the beginning of September, all participating clubs will be confirmed seven weeks ahead of the start of the group matches.

A limited number of federations will have direct access to the European League, while up to eight teams can be upgraded – if requested – from the EHF European Cup to play in that one qualification round for the spots in the group matches.

Even though the new structure adds a main round and play-offs, the total number of matches since the start of the group stage will remain the same. While the current group phase has 10 rounds, the new group matches have six and the main round has four; also, no Last 16 will be played.

COUNTDOWN #13: Molde Elite (NOR). Molde are preparing for a tough challenge in their first season in the EHF European League Women group pha…

POWER RANKINGS: At the halfway point of the EHF European League Men group phase, we rank the best teams so far, according to their performan…

DVSC are back with high hopes

COUNTDOWN #14: DVSC Schaeffler (HUN). Debrecen are looking to return to their glory days as they come back to European competition

GROUP D REVIEW: Irun run over Eurofarm Pelister and Skanderborg-Aarhus were a tough challenge for the German foxes

Montpellier add fifth win to their streak while Veszprem mak…

GROUP A REVIEW : Thanks to a tight win in Lisbon, Montpellier remain on top of the group while Fejer B.A.L.-Veszprem took their first ever p…

Flensburg in first place after clear win over Benidorm

GROUP B REVIEW: Flensburg tightened their grip on the group lead with their clearest win of the season, 38:32, against TM Benidorm

GROUP C REVIEW: Alpla Hard and Balatonfüred ended in a draw after a great battle for their first points

SUMMARY: Running coverage of the 12 matches in round 5 of the EHF European League Men 2022/23 group phase

COUNTDOWN #15: Paris 92 (FRA). After failing to reach the group phase last season, the French side intends to play a big role