In Tuesday's draw for round 1 of the EHF European Cup Men 2022/23, Italian clubs Raimond Sassari and SSV Brixen were drawn to face other in the matches that will take place on 10/11 September and 17/18 September 2022.

Last season, Raimond Sassari beat HB Dudelange from Luxembourg in round 1, but lost in round 2 against eventual champions Nærbo IL. While Raimond Sassari have recent experience of playing in a European Cup competition, SSV Brixen have not made an appearance in Europe since they played in round 2 of the EHF Cup in 2006/07.

Turkish and Czech sides to feature in round 1

HB Dudelange, who reached the quarter-finals of the Challenge Cup in 2016/17, will meet Turkish side Spor Toto SK in the opening round of the 2022/23 season.

HC Robe Zubri, quarter-finalists in the EHF European Men in 2020/21, will also face Turkish opponents in round 1 when they face Izmir BSB SK. In 2021/22, HC Robe Zubri's campaign in Europe's third-tier competition ended when they lost against fellow Czech side Talent tym Plzenskeho kraje in round 3.

European Cup regulars HC Dukla Praha have featured at this level in each of the past four seasons, and the club from the capital of the Czech Republic have been drawn against SPD Radnicki Kragujevac from Serbia. TJ Sokol Nove Veseli, third club in the draw from the Czech Republic, will face HC Tallinn from Estonia in round 1.

51 teams will join the competition in round 2 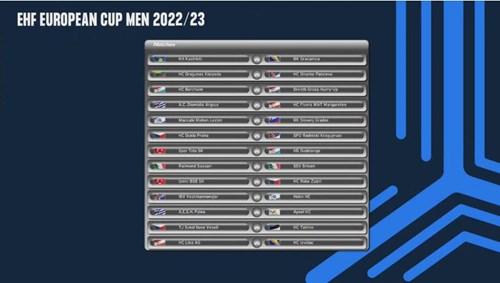 Next Article Quintus and Vestmannaeyjar face Greek opponents in round 2

Turkish teams to host their rivals on Saturday

ROUND PREVIEW: Five first-leg encounters of the Last 16 will be held on Saturday and Sunday

OFFICIAL STATEMENT: The EHF Court of Handball has reached a decision in cases opened against Förthof UHK Krems and Vojvodina following an EH…