Handball in Hungary, especially in Szeged, always marks a special occasion. You meet with friends, spend a nice afternoon with family, let the steam off.

Supporters of Pick Szeged have lived their handball experience in the same place for almost 50 years: the Városi Sportcsarnok, the city sports hall often nicknamed ‘Spori.’

But with the city being one of the host venues for the Men’s EHF EURO 2022 in January, a new state-of-the-art arena has been built: the Pick Aréna – and Pick Szeged will be playing their home matches here from now on, starting against THW Kiel on Thursday 9 December.

The Városi Sportcsarnok, completed in 1974, was initially intended as swimming arena, but technical problems forced a change of plans. It became the home arena of Pick Szeged, and with the club playing their EHF Champions League matches there since 1996, it is obvious that the hall breaths European handball history.

Following Szeged’s last EHF Champions League match in the hall – against HC Vardar 1961 last Thursday – here are some of the most memorable Szeged matches in the Városi Sportcsarnok.

The EHF Champions League first set foot in Spori in 1996. Pick Szeged had won their first of, so far, four Hungarian national championships the previous season and they prepared for their debut against Romanian side Steaua Bucuresti. The jam-packed grandstand meant that 2,000 spectators were attending the confident win over the opponents, with line player Richárd Mezei in a leading role after scoring eight goals for the hosts.

“To be honest, there were definitely more spectators than the official numbers. I recall fans on the roof and actually everywhere,” Mezei said about that first game.

“This support gave us an extra player on the court. I still remember how the whole building was moving by the roars and drums. We felt like gladiators. This meant fear for the opponents but for us, it was extra energy. After we were called to the court, the game was delayed by at least 10 minutes as the staff had to remove the confetti, ribbon and other things. I have never experienced such an euphoria, which automatically helped me to play extraordinary and as my teammates felt that, fed me with great passes.”

Meanwhile a renowned name in Europe’s top flight, Szeged earned what is still their biggest win in the competition in a group match against Bosna Sarajevo in 2007. The Szeged fans in the Spori could hardly believe their eyes when their favourites played out of their skin, with three players ending up scoring seven or more goals that night. Among them was Milorad Krivokapic, brother of the team’s assistant coach, Marko. Needless to say, also for this historic match the arena was full to capacity, as was usually the case for Szeged’s home matches in the EHF Champions League.

Since the arrival of current head coach Juan Carlos Pastor in 2013, defence had become more of a focus for the team than in previous times. One of the best examples of the tactical mastermind’s work was the home game against Wisla Plock in the Last 16 of the 2018/19 season, when Szeged conceded just 16 goals in total, evenly divided over the two halves. Plock had 38 shots that night, but thanks to the excellent goalkeeping from Mirko Alilovic and Marin Sego, 22 of those shots were saved. And Bence Bánhídi netted six times at the other end of the court.

“We have a system in defence and when it works, we have results like this,” assistant coach Krivokapic said. “Of course, it is rare that both the defensive line and the goalkeepers have a great day. It is even more unique in today’s handball, with this high-tempo play, that a team scores only 16 goals. The fans supported us on both sides of the court; they blew up the arena after every save and successful defence.”

The final game in the ‘Spori’ featured one of Szeged’s main rivals through the years: two-time EHF Champions League winners Vardar – and once more 3,000 fans were attending.

“I still did not realise that we will move from here. I have always worked in ‘Spori’ since I arrived,” Krivokapic said.

“I am grateful for this venue although I miss only one thing: that we never celebrated our triumphs at home, in front of our crowd.”

Line player Bánhídi talked about “our last international game in this sensational sports hall,” and Kent-Robin Tønnesen, who eight times in the farewell game against Vardar, added: “If you come to play Szeged, you not only face the home team.”

Life in the EHF Champions League goes on for Szeged with the reverse fixture against Vardar in Skopje on Thursday (live on EHFTV at 20:45 CET).

Their next home game against Kiel two weeks later will take place in the Pick Aréna, built on one of the most beautiful sites near the river Tisza. The arena is the second-largest multifunctional event hall in Hungary with a capacity of 8,143 seats. 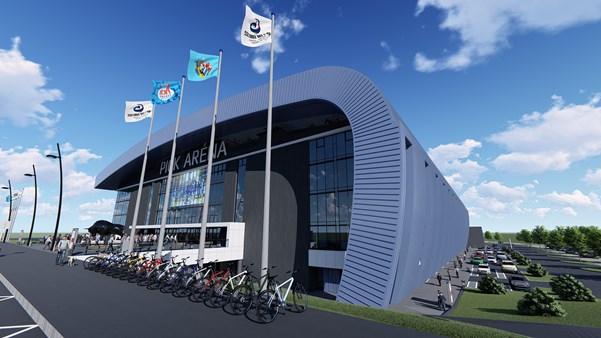 “We have checked out the new arena and it is looking good, however it will be hard to create the same atmosphere,” Krivokapic said.

“Yet, the people of Szeged love handball and I hope that we will always play with a full house. Luckily, the stands are pretty close to the court, therefore I am pretty sure that our arena opening match against Kiel will be amazing.”