The EHF European League Men group phase will feature four groups of six teams, and the first of 10 rounds will take place on Tuesday 25 October 2022. Four teams from each group will qualify for the Last 16, which is scheduled for Tuesday 21 March 2023 (first leg) and Tuesday 28 March 2023 (second leg).

Defending champions SL Benfica will face several teams with vast European experience in group A. Montpellier HB, who won the EHF Champions League in 2002/03 and 2017/18, and three-time EHF Cup winners Frisch Auf Göppingen are two teams that will immediately catch the eye of Benfica's players and fans. Swiss champions Kadetten Schaffhausen and Slovakian contenders TATRAN Presov will ensure that the race for the top four places in group A is hotly contested. Hungarian side Fejer B.A.L-Veszprem are the only side in the group that are making their first appearance in a European Cup competition this season. 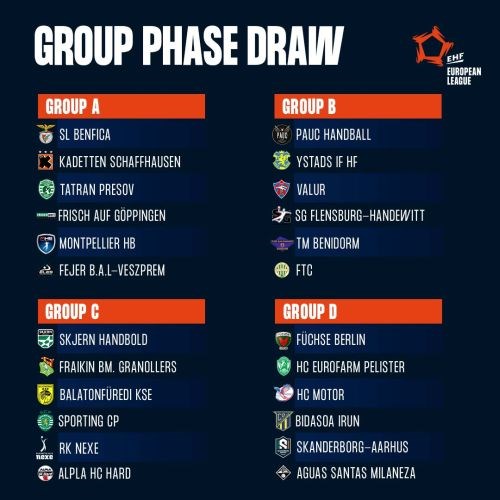 In group B, PAUC Handball, who participated in last season's group phase, will meet five EHF European League group phase newcomers. While SG Flensburg-Handewitt lifted the EHF Champions League trophy in 2013/14, they will make their first appearance in the EHF European League group phase in group B. Fellow qualification round 2 winners TM Benidorm and FTC will join Swedish champions Ystads IF and Icelandic side Valur in completing the group line-up.

When Skjern Handbold make their first appearance in the group phase of Europe's second-tier club competition since the 2014/15 season, they will face Alpla HC Hard, RK Nexe, Fraikin BM. Granollers, Balatonfüredi KSE and Sporting CP in group C. In qualification round 2 of the EHF Cup 2019/20, Skjern lost 60:59 on aggregate against Alpla HC Hard. Croatian side Nexe finished fourth at the EHF European League Finals last season – and they will bid to advance from the group phase for the third season in a row.

Last season, Füchse Berlin met Bidasoa Irun in group A of the EHF European League group phase, but this time the German side will meet the Spanish club in group D. However, Berlin and Bidasoa will also have to contend with HC Eurofarm Pelister, who reached the Last 16 in the 2021/22 season, and HC Motor from Ukraine. HC Motor competed in the EHF Champions League from 2013/14 to 2021/22, but the two remaining teams in group D – Skanderborg-Aarhus and Aguas Santas Milaneza – are making their first appearance in the group phase of a European Cup competition.

Previous Article Women at the heart of the game: Bojana Popovic's determination

Next Article Hot streaks put to test as powerhouses clash