Three postponed matches from DELO EHF Champions League 2021/22 round 9 were played on Wednesday night, with victories for the three home teams.

That brings us to the end of this great night DELO EHF Champions League action. Refresh on all tonight's games with our reviews below and see you next round as the top flight continues. 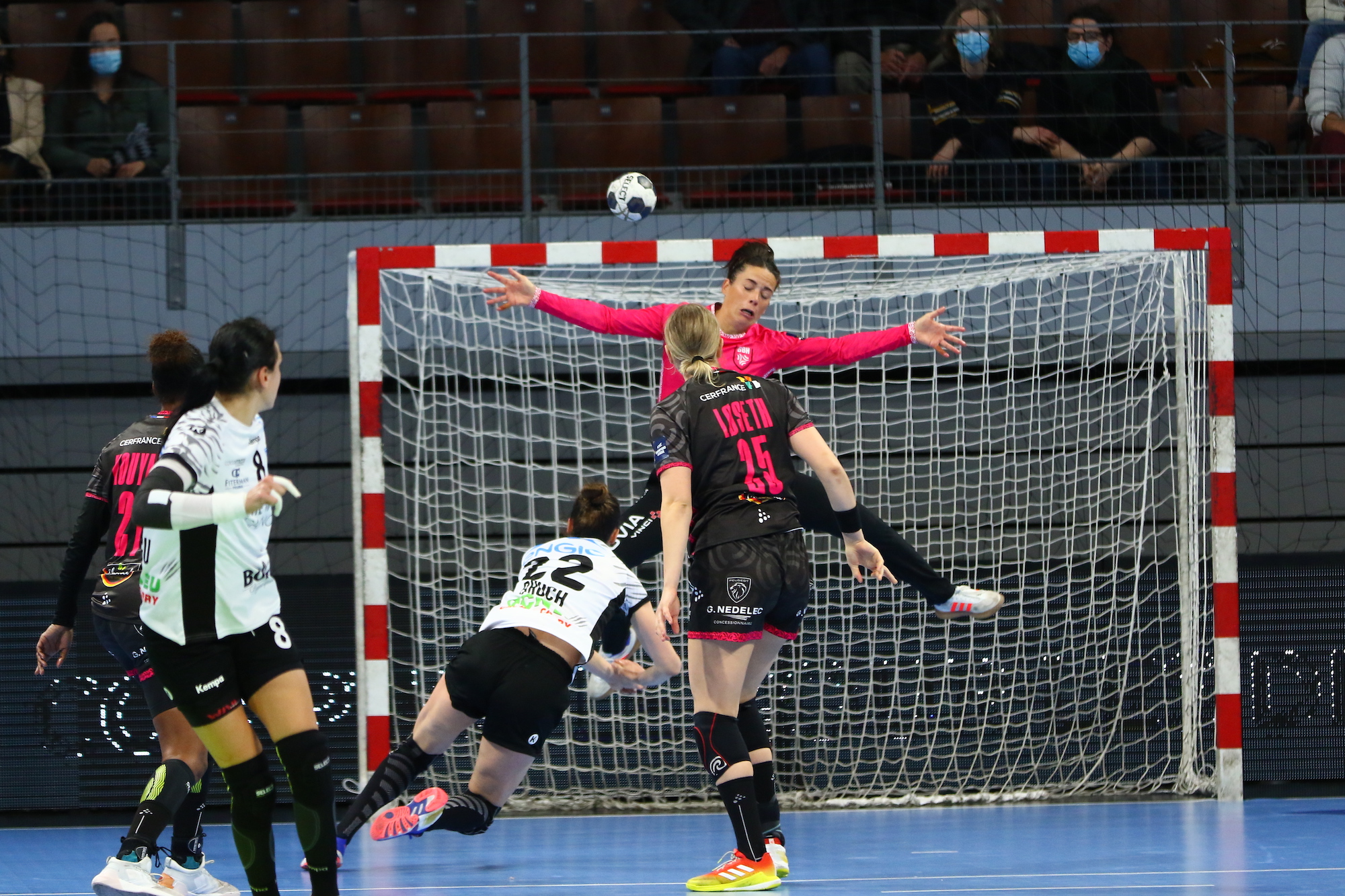 I am very happy. Our start to the game was not good but we remained calm. It was really a nice high-level match. Playing fast is in our DNA — it's what we've been trying to do for a while. We are successful with that so obviously that was also the objective tonight.
Cleopatre Darleux
Brest goalkeeper

The last match on Wednesday ends with an important win for Brest, who move up to 10 points and jump from sixth in group A to fourth — snatching CSM's position.

Cleopatre Darleux was the indisputable hero for Brest, with 20 saves at an unbelievable rate of 50 per cent. 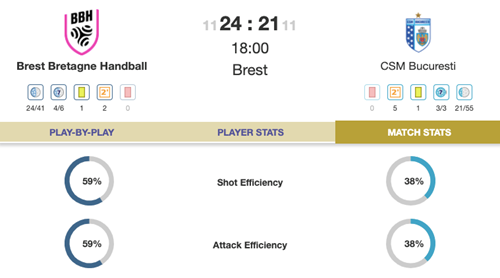 CSM are not letting these two points go without a fight. Two goals in a row from CSM, courtesy of Cristina Neagu and Samara Vieira, saw the Romanian side come within one at 20:19.

But another great save from Darleux opened the door for Brest to reopen a clearer lead and they have a narrow cushion, 22:20, as the final buzzer approaches.

Just under 10 minutes on the clock and Brest look to have the momentum here, although their lead is not so decisive, at 20:17.

It is still the Darleux show, with 18 saves at 53 per cent. In attack, Pauline Coatenea leads the scoring race, with five goals from five attempts.

Brest have managed a huge turnaround and now have the lead as the second half gets underway — 17:12 in the 37th.

Brest keeper Darleux is having the match of her life, saving almost everything that comes her way. Her tally now stands at 14 with a rate of 54 per cent.

What a match we have on our hands now! Brest have fought back from a clear deficit to start the game and go to the break level with CSM, promising an exciting second half.

The low shooting efficiencies from both sides show just how great the defensive and goalkeeping contest has been. 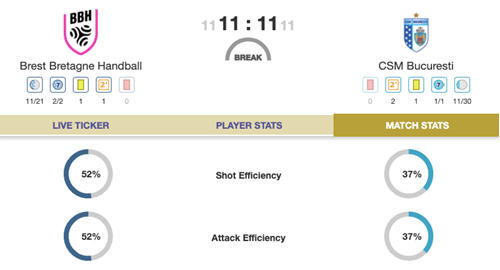 The match is delivering a great goalkeeping battle between Cleopatre Darleux in Brest's goal and Jelena Grubisic for CSM. At 10:10 in the 27th minute, Darleux has saved 10 while Grubisic has stopped nine, for huge rates of 50 per cent and 47 per cent, respectively.

Brest have recovered from their slow start and we have a near-level game as the 20-minute mark approaches, at 9:7 for Bucharest.

Brest's round 10 match scheduled for last weekend was postponed, making this the French team's first Champions League match in 2022. The team appear to be shaking off the rust and have found their way into the game against CSM now.

CSM shock Brest with a much stronger start, scoring four goals before the French team add their first. As we hit the 10-minute mark, the Romanian team still hold command, at 2:6.

We still have one match to go on this bonus night of DELO EHF Champions League action: Brest vs CSM.

Brest took the points on CSM's court in the reverse fixture, 30:29, thanks to a last-second goal.

The French team have a superb record on the home court, with no losses so far this season on their own court, so CSM clearly have their work cut out for them.

This home record bodes well for Brest, who enter the match sixth in group A with eight points, while CSM are fourth with 10. 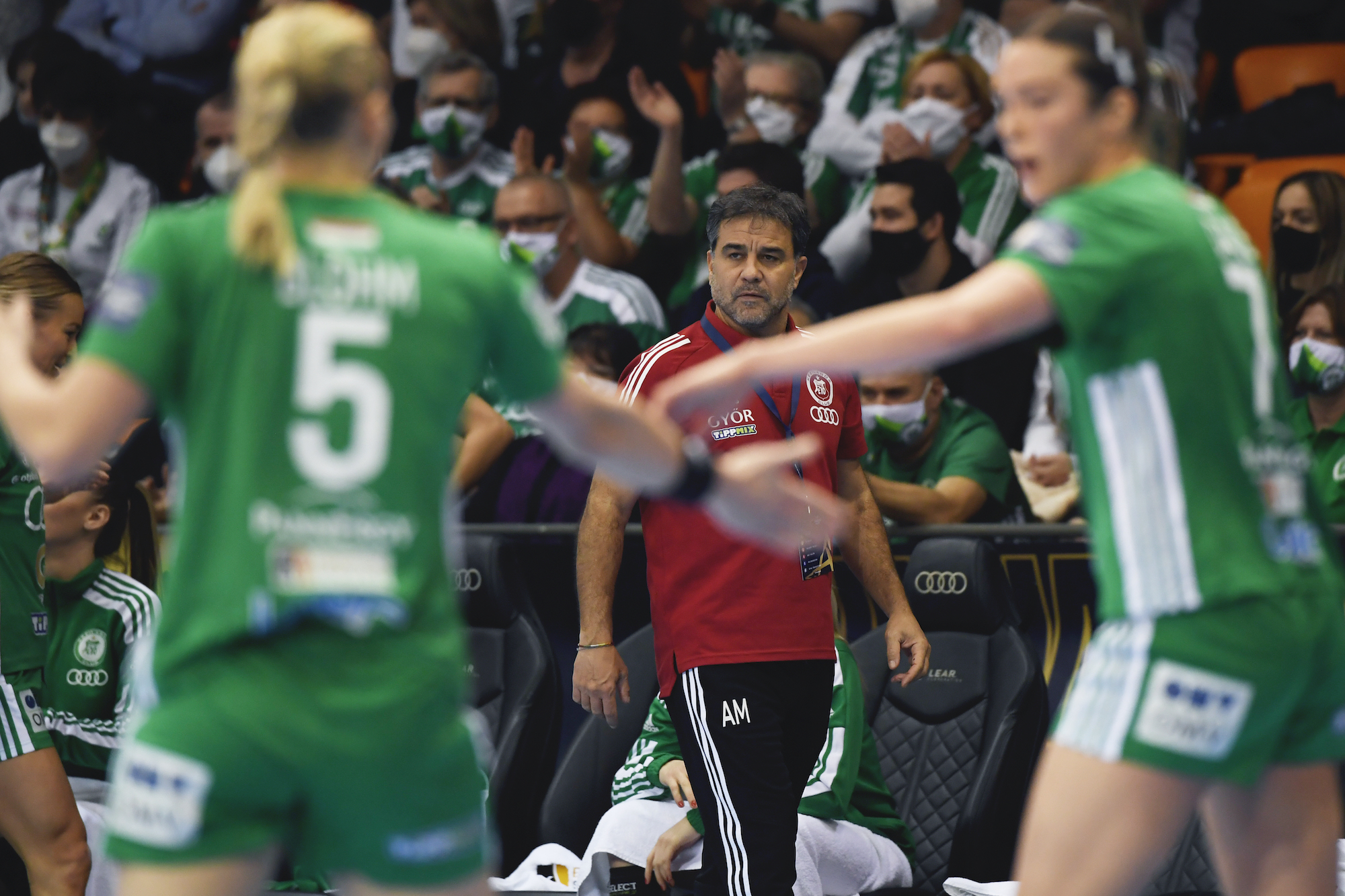 The opposing team [Krim] has caused a lot of difficulties to us but after that we could play better from counter attacks. They pushed us really hard. For us, it was good that more players could come into the team and I could change more, but there are hard Champions League matches to come in the upcoming period. I wish Krim good luck in the future.
Ambros Martin
Györ coach 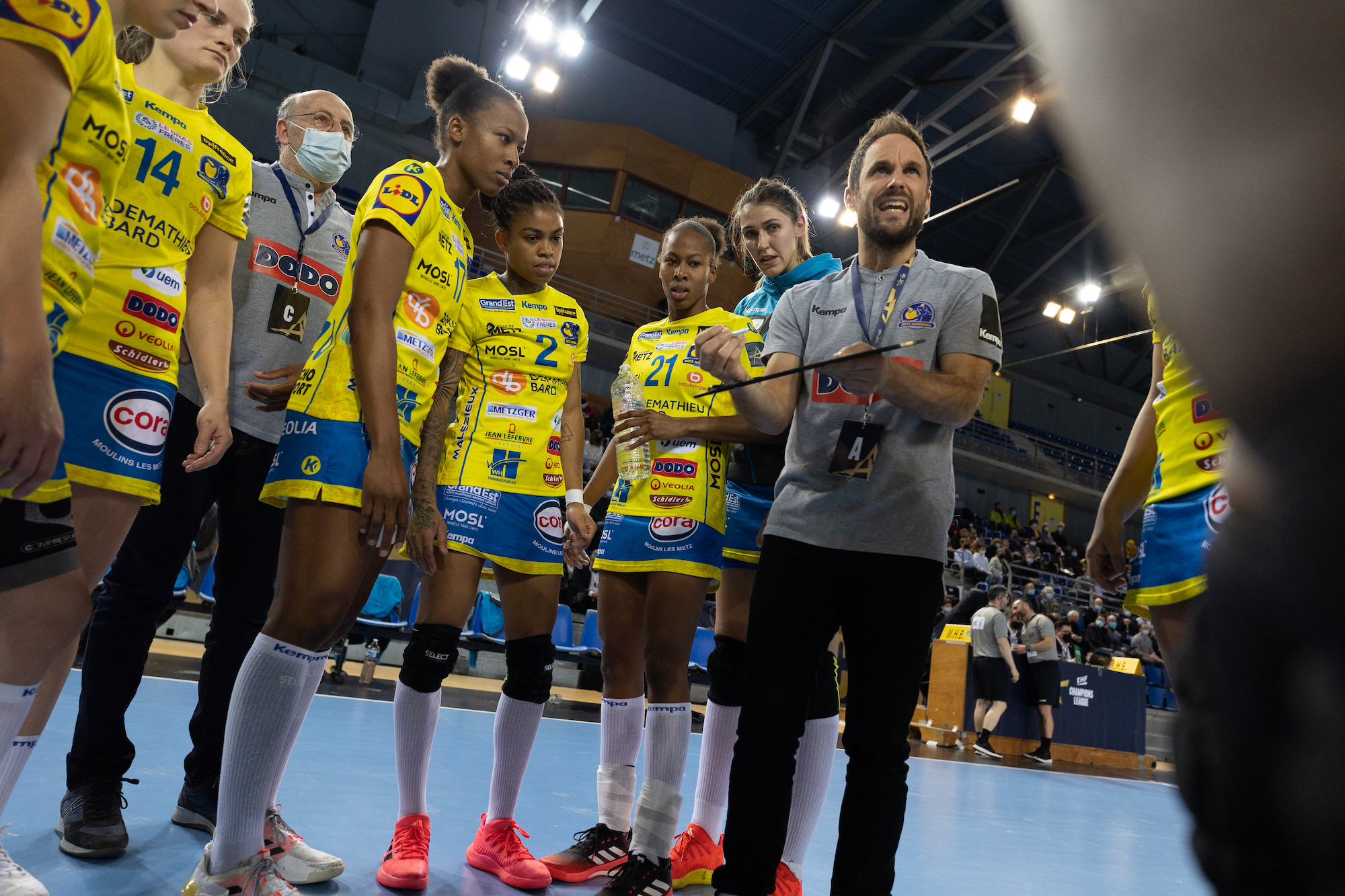 I don't have a good feeling about what I saw. Of course we won but I didn't like what we did. We didn't play as expected. We have to be better in defence.
Emmanuel Mayonnade
Metz coach

Metz join second-placed Vipers Kristiansand on 14 points as they secure their seventh win of the 2021/22 season, pulling further clear of fourth-ranked Odense on 11 points.

For Kastamonu, it is the ninth straight loss and the Turkish side are left waiting to clinch their first points ever in the top flight. 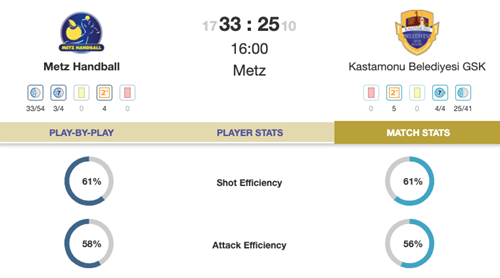 A respectable number of goals scored by Krim, but the Slovenian side cannot find an answer for Györ's attack and succumb to a decisive defeat — their seventh of the season.

On the other hand, the victory is Györ's 10th in 10 games, keeping the Hungarian team on the maximum points. 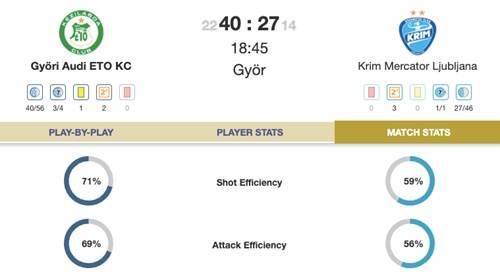 Györ are coming close to their highest number of goals scored in a match so far this season, after a 41:19 result against Sävehof in October.

One of their biggest weapons, in a team full of superb attacking assets, has been South Korean star Eun Hee Ryu. Ryu entered tonight's game as the team's top scorer this season, with 32 goals prior to the clash against Krim.

Jovanka Radicevic nets her eighth goal to narrow the gap against Metz to five, 24:19.

Radicevic has been a highly valuable transfer for Kastamonu this season and is clear and away the side's top scorer, with 45 goals before this game against Metz.

Radicevic was joined by several of her Montenegro national teammates in the transfer to the Turkish club: goalkeeper Marina Rajcic, centre back Milena Raicevic and fellow wing Majda Mehmedovic — and this play below proves how their experience together is benefitting Kastamonu.

The second halves are underway with both Kastamonu and Krim facing big tasks to come back from their deficits. Five minutes in in Metz, Kastamonu have narrowed the gap slightly, at 20:14. In Hungary, Krim are seeing their opponents streak away from them, with Györ now nine goals in front at 26:17.

Metz end the opening half strong and hold a clear lead at half-time against Kastamonu — from 11:10 with six minutes to go to an unanswered run of six goals that gives them a very comfortable advantage.

As usual, Kastamonu wing Jovanka Radicevic is key for her side with five goals at 100 per cent in the opening half, while Tamara Horacek has netted the same number for Metz. 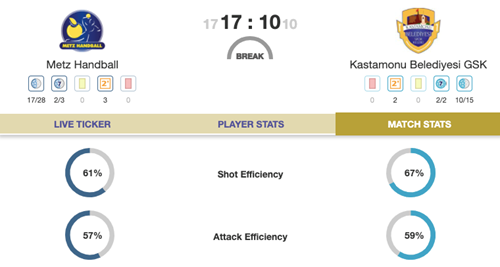 Krim go to the break trailing their hosts by eight goals and look on their way to a defeat in Hungary.

Krim back Andrea Lekic top scores the half with five goals, while Anne Mette Hansen and Nadine Schatzl net four apiece for Györ. 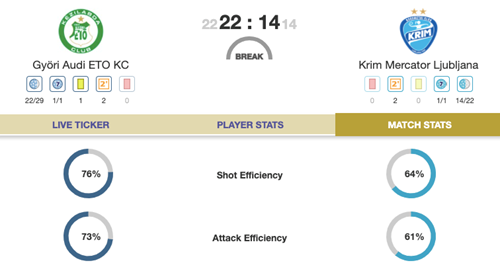 We have an exciting battle in France! Late in the first half, Metz have a three-goal advantage as Kastamonu are managing quite the challenge.

The French team won the earlier duel between the two with a clear margin, 30:20. Can the Turkish side hold on and ensure a closer result tonight?

Krim kept pace for a while but Györ are powering to half-time now, holding a 17:11 lead with seven minutes until the break.

In the reverse fixture between these sides, Györ had a lead of just one goal at half-time, but the situation looks to be very different on Hungarian turf.

10 minutes in and we have two close clashes. In France, Metz are level with Kastamonu at 6:6, while Györ just have the edge over Krim, 8:7.

Kastamonu are still fighting for their first points of the season, having lost all their matches so far. The Turkish side have not played a Champions League match since 20 November, but seem to be shaking off the cobwebs nicely.

Krim are also hoping to climb the group B table tonight. They sit in sixth place, two spots higher than Kastamonu, with five points.

I wish I never had this career.

I wish I never had to have this career.

That is what I tell myself every single day.

Not because I hate my job, far from that. But because it started with a traumatic accident.

These are the words of Metz coach Emmanuel Mayonnade in the latest installment of our This is me series. Tonight, his side are fighting for their seventh win of the season, following a loss to Györ on the weekend.

Read the full story below.

Tonight, six teams whose clashes were postponed in round 9 take the court:

While we wait for throw-off, read all about what's coming up in our preview below.

Next Article Summary: Teams regroup ahead of main round

NEWS: The semi-final pairings for Cologne will be drawn at the EHF office in Vienna on Tuesday at 11:00 CEST

INSIGHT: Data analyst Julian Rux breaks down which areas will be decisive when Kiel and PSG face each other in the quarter-final second leg