Through knockout matches, it happens again and again that statistically clearly favoured teams are surprisingly eliminated. This, though, has not been the case in the EHF Champions League Women 2021/22: the four best teams of the season by the numbers have all made it to the EHF FINAL4 2022 in Budapest this weekend.

Györ have the edge – defensively and offensively

Both on the defensive and offensive end, all four teams are elite. Still, Györi Audi ETO KC have slightly better numbers than their competitors for the trophy.

In attack, Györ lead all 16 EHF Champions League participants with 29.0 goals per 50 possessions; 1.2 better than second-ranked Vipers Kristiansand, who are closer to sixth-placed Odense Håndbold with a difference of just 1.0.

The main reason behind Györ’s very good numbers is their shooting: with 66.8%, they have by far the best success rate. They can also afford to lose the ball only slightly less often than average (9.5 turnovers per 50 possessions).

While the Norwegian line player will miss the EHF FINAL4 due to her pregnancy, her replacements Linn Blohm and Crina Pintea have also excellent shooting percentages: 85.0% and 80.0%, respectively. 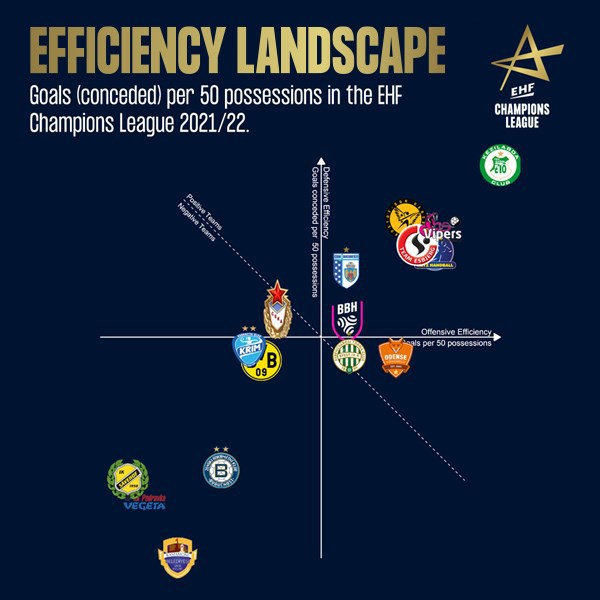 That is also down to the goalkeepers. Amandine Leynaud has been between the posts for only 80 shots, but saved an outstanding 42.5% of them, which is clearly the best value. If you draw the line a little higher, her compatriot and teammate Laura Glauser is the best goalkeeper in the EHF Champions League with 36.5% of the shots on target saved.

The other three EHF FINAL4 participants are much closer regarding their main numbers. But there are differences in the details.

With Team Esbjerg, the style of play is very interesting: They have the second longest attacks of all EHF Champions League teams, averaging 33.6 seconds to the first shot or turnover.

Normally, this is a sign of bad teams that have problems finding good chances. But that’s not the case for the Danish team: with 27.4 goals per 50 possessions, they have the fourth best offence.

Instead, they just seem to be careful. They are the best team amongst the EHF FINAL4 participants in not turning the ball over (8.9, fourth best overall), but have a lower shooting percentage than the other three at 62.2% (fifth overall).

Kristine Breistøl is statistically particularly striking. The left back is the best field goal scorer in the entire EHF Champions League with 5.2 goals per game.

Marit Malm Frafjord is also very interesting: with an outstanding 92.6%, she has the best field goal percentage among all players with at least two shots per game.

From a statistical point of view, Metz Handball are a surprise package. The mid-season arrival of Grâce Zaadi, the third-best scorer amongst all players at the EHF FINAL4 (5.5 goals per game), can either give a good attack (27.7 goals per 50 possessions, third overall) the decisive improvement or cause the running engine to stutter. 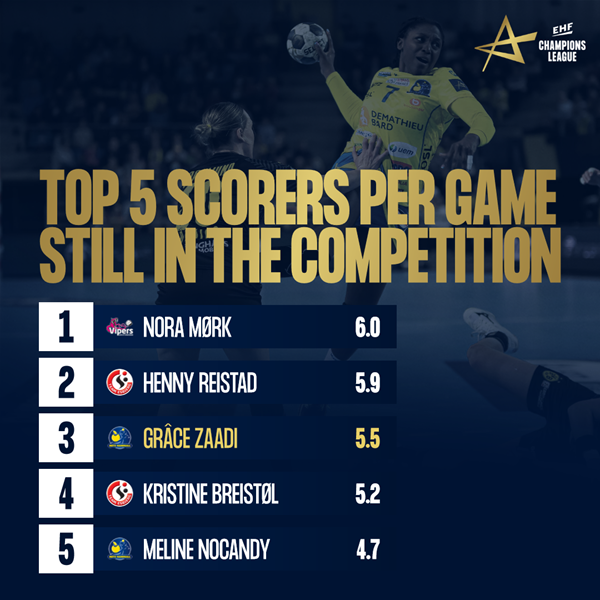 The French team have scored efficiently so far (63.7%, second best) but have had some problems turning the ball over (9.6 per 50 possessions, just slightly above average). Here, of course, playmaker Zaadi could help them a lot. In the two matches she played for Metz, they already had exactly one turnover per 50 possessions less than in the previous games without her.

On the other side of the court, they are the fifth best team with 23.7 goals conceded per 50 possessions. They have just allowed their opponents to score on 55.6% of their shots, which is the second best number amongst all EHF FINAL4 participants. But they are also the EHF FINAKL4 team that forced the lowest number of turnovers: 11.1 per 50 possessions.

Vipers Kristiansand are the only EHF FINAL4 participants without a big unique statistical characteristic. Of course, that doesn’t say much about the Norwegian team’s chances in Budapest; their numbers are even slightly better than those of Metz, their semi-final opponents.

Lead by Nora Mørk, who is the best scorer amongst players at the EHF FINAL4 with 6.0 goals per game, their attack ranks second: 27.8 goals per 50 possessions. They shoot well (63.1%, third best), but have potential for improvement in taking care of the ball (9.2 turnovers per 50 possessions, fifth best).

In defence, Vipers rank third with 22.3 goals conceded per 50 possessions. They are very good at forcing turnovers (12.6 per 50 possessions, second most) but have allowed their opponents a shooting percentage of 57.5% - almost exactly the average for all teams.

So, the season’s numbers make Györ the favourites. But statistics are collected over a longer period of time. In single matches, randomness always plays a role and the favourites not always prevail.

Summary: Coverage of Sunday's three games from round 3 of the EHF Champions League Women

SUMMARY: SG BBM Bietigheim cruised to a 20-goal win against FTC-Rail Cargo Hungaria in round 2 of the EHF Champions League Women group phase