There was plenty of drama, some big wins and superb individual performances in the quarter-finals of the DELO EHF Champions League, which saw Györi Audi ETO KC, Vipers Kristiansand, Brest Bretagne Handball and CSKA proceed to the DELO EHF FINAL4.

Trends have been reversed, records can be broken in Budapest, but what were the main points worth exploring in-depth after two superb weekends of handball? We take a look in the next lines, hitting all the main points after the exhilarating eight games that produced the finalists for this season’s DELO EHF Champions League.

All eyes on Budapest

The DELO EHF FINAL4 2021 draw will determine who will face who in the battle for places in the trophy match in Budapest. The draw will take place in the Sport TV studio in the Hungarian capital on Tuesday 13 April at 17:30 CEST.

The draw will be streamed live on EHFTV, the EHF Champions League Facebook page and Home of Handball YouTube channel, with possible geo-blocking restrictions. TV stations across and outside Europe are broadcasting the draw live (see overview). The draw will also be covered with live tweets on the official Twitter channel, @ehfcl.

This will be the seventh DELO EHF FINAL4 hosted by Budapest, but there are still teams making the trip for the first time. After Vipers Kristiansand and Metz Handball made their debuts two years ago, now it is CSKA and Brest’s turn to compete at the biggest weekend in women’s club handball.

It was an impressive season for both sides as Brest (three losses) and CSKA Moscow (four losses) were two of the most consistent teams in this season. It was by no means an easy passage for CSKA, with the Russian side taking a 47:46 aggregate win against Krim in the play-offs, before winning their quarter-final against CSM Bucuresti on the away goals rule. Brest stormed through their knockout ties and are on a seven-game unbeaten run.

Györ with history and current form on their side

Riding an unprecedented 55-game unbeaten streak, Györ are definitely the team to beat in Budapest, where they will be looking for their sixth title. They have a positive balance against each of the other three teams taking part in the DELO EHF FINAL4, but their experience in these situations will be one of the best assets.

The Hungarian powerhouse are leading the pack in wins secured in the DELO EHF Champions League, having won 175 games from 234 played, for a 74.3 per cent efficiency. By comparison, Brest, CSKA and Vipers won 57 games between them in the competition in 118 games. It truly is an amazing figure and a measure of how the Hungarian side dominated their opponents throughout the 17 seasons played in Europe’s top flight.

Vipers bite back in superb fashion

Welcoming back right back Nora Mørk and line player Heidi Løke after injuries, Vipers ended the knock-out phase of the competition with a majestic display against Rostov-Don. The Norwegian side eked a quarter-finals berth against Odense, after a superb comeback, only to find themselves as underdogs against the winners of Group 1.

It looked like game over for the Norwegian side, who lost five of their last seven games in the group phase and could not play at home in the quarter-finals. With both games on home court, Rostov-Don were favourites to proceed to the DELO EHF FINAL4 for the third time, but failed to secure a win against a plucky Norwegian side as the absence of influential right back Anna Vyakhireva created a huge gap in their attack. Mørk (14 goals) and Løke (10 goals) were crucial for Vipers, who dazzled their way to a 57:50 aggregate win. 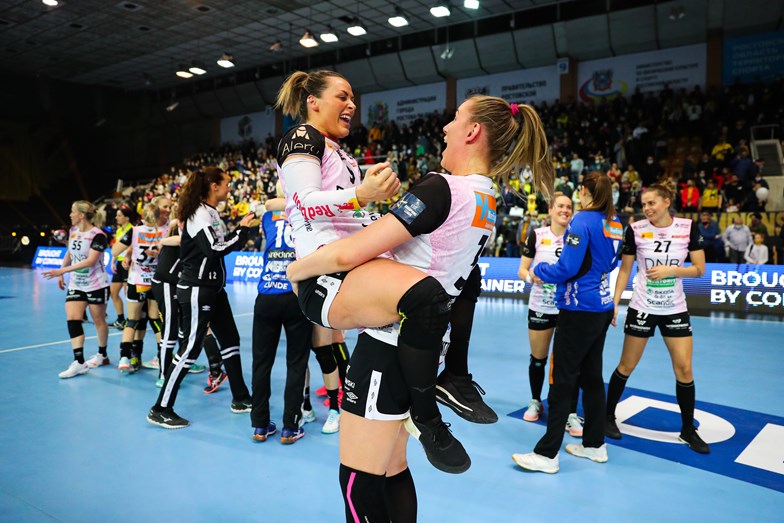 CSM pay the price of their Neagu-dependence

While Vipers were the pleasant surprise of the quarter-finals, no team has suffered more than CSM Bucuresti. The winners of the 2015/16 season led by as many as nine goals in the first leg against CSKA and by three in Moscow, only to collapse entirely in the second half of both games, creating an opening for the Russian side. It is a testament of the lack of depth, caused by both injuries and Covid-19 cases, which ravaged the Romanian side throughout the season.

Yet six one-on-one misses in the second leg, a lack of support for Cristina Neagu’s efforts, who scored 15 of CSM’s 51 goals in the doubleheader, and a lack of chemistry in the team were too much for CSM to overcome. Despite boasting one of the best players in the world, a lack of a ‘Plan B’ was CSM’s undoing as they missed out on Budapest for the second time in a row.

With Neagu (115 goals in 15 games) out of contention, Brest’s right back Ana Gros has virtually wrapped up the top goalscorer crown this season. The Slovenian right back will leave France after eight seasons at Metz and Brest to join CSKA in the summer but is ending her three-season stint at Brest on a high.

Gros has scored 118 goals in 17 games this season, including 14 against Metz and boasts an unassailable lead over the next active player. Györ’s backs Veronica Kristiansen (83 goals) and Estelle Nze Minko (79 goals) will need to break Isabelle Gullden’s record 15-goal outing in Budapest to have a chance to beat Gros. Only two players – Timea Toth (127 goals) in the 2007/08 season and Anita Gőrbicz (133 goals) in 2011/12 have scored more than Gros in the last 20 years, so this feels like a season to remember.

Next Article Györ to face Brest in first semi-final; Vipers vs CSKA next