Ahead of throw-off of the Women's EHF EURO 2022 in just over a month, eurohandball.com is beginning a series presenting each of the 16 teams participating in the final tournament - starting with Serbia.

Serbia have gone through changes after appointing Uros Bregar as head coach in April 2021. The former Slovenia national team head coach took over the helm ahead of the 2021 IHF Women's World Championship 2021 qualifying matches, and with a rejuvenated squad wants to put Serbia back on track at the major events. At their ninth EHF EURO they will aim to return to their best after finishing no higher than ninth place since 2014.

Three questions ahead of the Women's EHF EURO 2022:

- Can Serbia make it to the main round?

Serbia's biggest EHF EURO success happened in 2012 when they, as hosts, finished fourth. Since then, Serbia have struggled at major events and failed to qualify for the main round of the EHF EURO in 2014 and 2020.

After finishing 13th at the last EHF EURO in Denmark and Norway, Serbia parted ways with Ljubomir Obradovic and turned a new page by appointing Uros Bregar as head coach. Since then, they qualified both for the 2021 world championship and EHF EURO 2020, and won bronze at the Mediterranean Games 2021.

Even though Serbia will miss some of the star players from the last final tournament, they still have a good mixture of experienced and younger players. Jovana Stoiljkovic from Chambray Touraine Handball, Jelena Lavko from Baia Mare, and a good goalkeeping duo in the shape of Jovana Risovic and Sara Graovac will be among the players leading the team.

Even though they ended the world championship in 12th place, Serbia were close to qualifying for the quarter-finals, missing out by one point in the main round. A good performance in qualifying group 6 for this EHF EURO, with four wins and two defeats, as well as their Mediterranean Games bronze, makes Serbia no easy opponent. With strong support and on a good day, they can upset Denmark, Sweden and Slovenia in Celje.

- How will the team respond?

As he took over Serbia's national team, Bregar had to deal with the absence of key players such as Andrea Lekic, Katarina Krpez-Slezak and Dragana Cvijic who have all retired from the national team.

Introducing younger players and building a team for the future is Bregar's main goal and Serbia is on track to make it happen. Established players such as Stoiljkovic, Lavko, Sanja Radosavljevic, Andjela Janjusevic and Kristina Liscevic will take to the court alongside up-and-coming youngsters, many of whom are playing club handball domestically.

''It is good that we have young players in the team and that we are introducing talents to the national team. I am very glad that we have more players that are playing in Serbia as we used to have all players playing abroad. I hope they will be leaders of this team in the future,'' says Lavko.

The team will have a good preparation period to adapt to Bregar's vision and it will be interesting to see how the players will respond to challenging opponents.

- What are the expectations?

Despite being drawn into the tough group B, Serbia believe they can fight everyone. With confidence, Serbia could well progress to the main round.

''We have a tough group but we are excited. We are happy that we are playing in Slovenia and I hope people will come and support us as it is really close to our country. We know Sweden well, we already played with them and we won at home. Denmark is one of the top teams and we also have hosts Slovenia, for the end. I think that will be the toughest match of the group for us but we will give our best to play as I know we can,'' says left back Janjusevic. 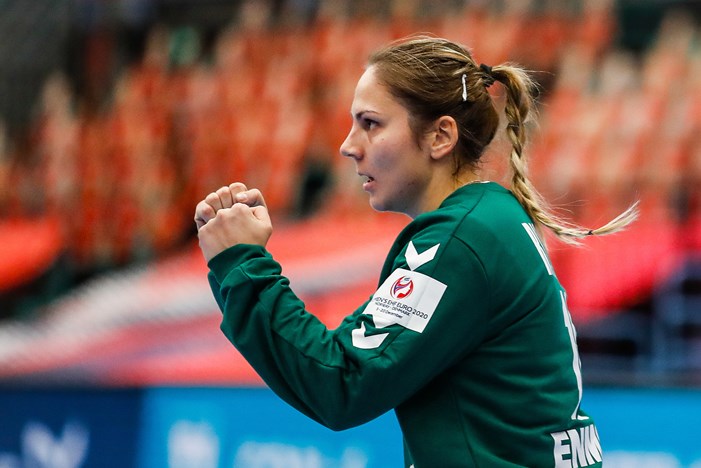 The heart of the team: Jovana Risovic

The 28-year-old goalkeeper has been number one in her position in recent years. Coming from Krim Mercator where she previously worked with Bregar, Risovic is having a good season alongside Barbara Arenhart. She was one of the key players in the EHF EURO 2022 qualifying matches and made 18 saves in the crucial match against Sweden. Apart from her performances between the posts and on the court, Risovic is also a player who always gives her all.

Jovana Stoiljkovic is the current squad's record holder. The left back has played 124 matches for Serbia and has scored 388 goals. She also makes Serbia’s top five in terms of EHF EURO matches played (26) and scorers (64 goals), and netted 27 times in qualification for this EHF EURO.

What do the numbers say?

Serbia are only one game away from reaching the 10-win milestone in EHF EURO history. In eight previous EHF EURO appearances, Serbia have recorded nine wins, 24 defeats and two matches ended in a draw. Out of those nine wins, two came against Denmark in 2012 and 2018, while in 2016 they beat Slovenia.

@rssrbije fans... how good does this feel? 🇷🇸
Serbia become the 14th team to take their place at #ehfeuro2022 pic.twitter.com/yeqcyxDv6m

Next Article Granollers out to play for the fans

FEATURE: Dutch siblings Inger and Kay Smits both play in the EHF Champions League and for the national team

FACTS AND FIGURES: Champions League stars made up the bulk of the EHF EURO 2022 All-star Team and 54 of players at the final weekend

TALKING POINTS: A ninth title for Norway, a perfect farewell for a Montenegrin icon, and returning All-stars headline the final weekend

SUMMARY: Coverage of the final day of the Women's EHF EURO 2022 in Ljubljana

BRONZE-MEDAL MATCH REVIEW: Montenegro took their first medal in any competition after a decade-long wait, as they defeated France 27:25