Two-time EHF Champions League Men winners HC Vardar 1961 have a new coach and new players, but irrespective of the problems and challenges that they face, Vardar always aim high in Europe's top-flight competition.

With Veselin Vujovic back at the helm as head coach, they will seek a spot in the EHF Champions League quarter-finals.

Most important question: Are Vardar stronger this season?

Vardar underwent some changes last season – and the whole season was challenging for the club. For this season, their clear goal is reaching the quarter-finals.

"We had very difficult start of the season. We have our goals, which are similar to the previous season. We want to reach the quarter-finals of the EHF Champions League, win the Macedonian Championship and Cup, as well as to reach Final Four of the SEHA League," said general manager and club owner Mihajlo Mihajlovski.

Even though they waited longer for confirmation of their participation in the EHF Champions League, the new Vardar team have trained hard under new head coach Veselin Vujovic. They will also have a fair amount of preparation matches ahead of the new season.

With 11 players departing from the club, including some high-profile players, it seemed likely that the Macedonian champions will have a hard time. But Vardar's new signings have, once again, surprised everyone. 13 new players will defend Vardar’s stronghold – the Jane Sandanski Arena.

"We have signed eight new foreign players, brought back Vujovic as head coach, welcomed our national team member Martin Tomovski and have four young Macedonian talents. If you ask me, we are 30 per cent stronger compared to the previous season," concluded Mihajlovski.

Under the spotlight: Timur Dibirov

While players come and go, Timur Dibirov is a club legend. The left wing is considered one of the pillars of Vardar 1961, and his fast breaks and efficient attacks are a nightmare for opposing goalkeepers.

Since joining Vardar in 2013, Dibirov also has a role in defence. Despite the summer signings, Dibirov will be one of the team's leaders in their 16th EHF Champions League campaign. 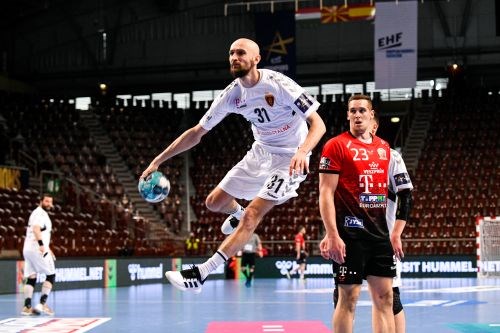 Vardar 1961 are counting down until their first group match against Elverum. In group A, they will face MOL-Pick Szeged, THW Kiel, Aalborg Håndbold, Meshkov Brest, Montpellier HB, HC PPD Zagreb and Elverum Handball.

Faced with some strong opponents and a few well-known rivals, they will have to fight hard to reach the quarter-finals.

However, the Skopje-based team has belief in their good players. Team captain Stojanche Stoilov agrees: "I just want to have a better season than last year. I want to see Vardar where we belong: with the big boys. I know it’s going to be a big challenge and very difficult, but step by step everything is possible."

"My biggest wish is to see our fans again. I missed them and it wasn’t the same without them. Their support is our additional energy and I just want to see them in the stands cheering like crazy," said Stoilov.

Veselin Vujovic took over the helm at Vardar in July 2021. The legendary Montenegrin has begun his third spell at Vardar, where he is still famous and loved by the fans. His first role at Vardar was from 2006 until 2009. He then returned in 2011 and stayed for two years. Perhaps his third stint will be a charm – both for Vujovic and the club.

Vardar 1961 had their first appearance in the EHF Champions League in the 1999/00 season and have been regular competitors since 2013/14. In 15 Champions League seasons, they have played 169 matches and won 76 times.