He rose highest in a crucial moment of the semi-final against Veszprém, a moment which encapsulates the type of player he is and the type of year he has enjoyed.

Hendrick Pekeler started the year with an individual award but no medal to show for it at EHF EURO 2020 but he put that right on Tuesday night in Cologne, winning his first EHF Champions League gold medal and with it the Most Valuable Player of the VELUX EHF FINAL4.

“For me, Hendrik Pekeler is always the MVP. He is extremely clever, he has the physical capability and he is full of power, which he has proved in these 130 minutes here in Cologne,” said Steffen Weinhold, Pekeler’s teammate at THW Kiel, after winning the final against Barça 33:28. 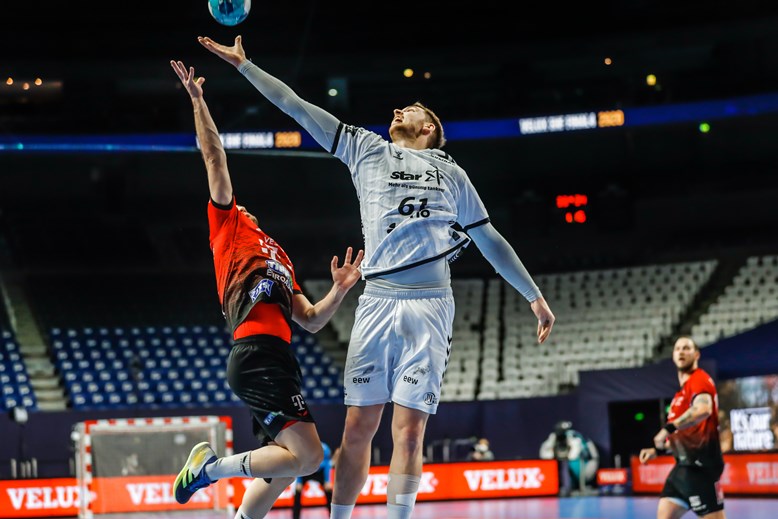 In January, 29-year-old line player Pekeler was awarded best defender at EHF EURO 2020 after finishing fifth with Germany. In Cologne, Pekeler was not only the boss of the outstanding THW defence but scored four goals in the semi-final against Veszprem (36:35 after extra-time) and in the final against Barça, which saw Kiel top of the winners’ podium for the fourth time, following wins in 2007, 2010 and 2012.

Pekeler returned to THW in 2018, the club where his career had begun when he was 18. He was part of the squad which won the EHF Champions League trophy in 2010, but did not play in Cologne.

After gaining experience at Bergischer HC and TBV Lemgo, he joined Rhein-Neckar Löwen in 2015 and became a starting player in the German national team, winning EHF EURO 2016 and the bronze medal at Rio 2016. In 2018, he returned to Kiel and won the EHF Cup in his first season.

Now Pekeler is the first German to receive the MVP award of the VELUX EHF FINAL4 - and the second THW Kiel player since Aron Palmarsson claimed it in 2014.

But Pekeler is not the only award-winning player of the THW Kiel squad in 2020:

“It is simply incredible, we made history tonight,” said THW coach Jicha, and his new arrival Sander Sagosen was prouder than ever before: “This gold medal is what I had dreamt about when I was five years old, standing with my gold medal around my neck. Champions of Europe sounds pretty good, this is what I dreamt of, in every training session and in every match.”

Previous Article Kiel at the top of Europe again

Next Article Lada looking for a return to the golden days

Summary: Barça win but some favourites stumble in round 1

SUMMARY: Coverage of the eight matches in round 1 of the EHF Champions League Men 2021/22 group phase

QUIZ: 12 questions to test your knowledge of Europe's top-level club competition right before throw-off of the 2021/22 season

This is Me: Carlos Ortega