Following the first two announcements of nominees for the EHF Champions League Men 2020/21 All-star Team, presented by Gorenje, the third round of names is revealed.

The third round of nominees were selected based on the combined votes of the EHF network of journalists across Europe.

The first round of nominees for the All-star Team were chosen by the 15 head coaches in the competition this season, while the second round came from All-star Team sponsors Gorenje.

When the vote launches on Friday, fans will have 60 individuals to choose from for the final All-star Team, which will be announced immediately prior to the EHF FINAL4 in Cologne. Along with the seven playing positions, the All-star Team, presented by Gorenje, will include a best defender, best young player and best coach. 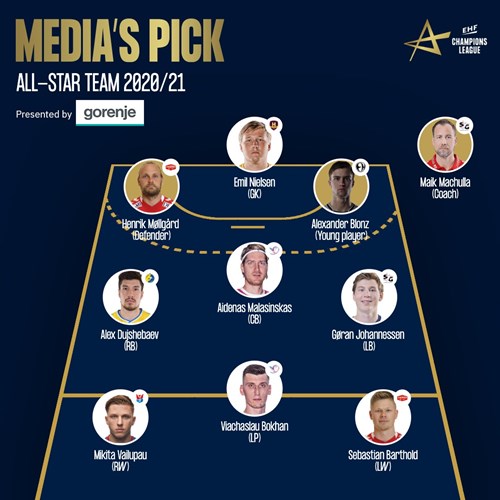 Four clubs see their first nominees in this round: Aalborg, Elverum, HC Motor and Kielce.

While the coach selection had heavily favoured powerhouses, with nominees primarily from Kiel, Barça and Flensburg, along with one from PSG, Gorenje introduced Meshkov Brest, Szeged, Nantes and Porto to the mix. Now, a total of 12 clubs are represented among the 30 individuals that have been revealed as nominees.

With the vote set to launch tomorrow, be sure to follow the EHF Champions League social media channels and visit us here at eurohandball.com for all the latest news and updates.

Next Article Gros: “We have played the best handball since I arrived”

GROUP B REVIEW: Elena Mikhaylichenko's 10 goals helped CSKA to claim a three-goal win against the title-holders

GROUP A REVIEW: Esbjerg enjoyed their third win of the season, 27:26, despite a late comeback attempt from Podravka

GROUP A REVIEW: FTC-Rail Cargo Hungaria are now on a five-game unbeaten streak this season after a crucial 28:27 win against Brest Bretagne