The 10-day fight for European beach handball titles gets underway on Thursday, when the YAC 17 events throw off the Beach Handball EURO 2021 in Bulgaria.

The senior teams will step onto the sand from Tuesday (13 July), two days after the junior teams have crowned their champions following four packed days of action on the seaside courts in Varna, the largest resort on Bulgaria’s Black Sea coast.

Both the men’s 17 and the women’s 17 event consists of 15 participating nations, divided into three groups of four and one group of three for the preliminary round on Thursday and Friday.

The top-two teams from all groups advance to the main round on Friday and Saturday, followed by the semi-finals and the medal matches on Sunday. All matches will be shown live on EHFTV. 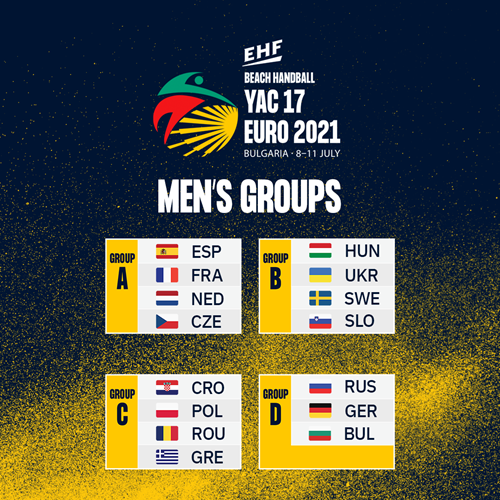 Croatia are out to retain their title from 2019

In the men’s tournament, Croatia are out to retain their title from 2019, when they defeated Hungary in the final.

This time, Croatia are up against Poland, Romania, and Greece in group C, while Hungary face Ukraine, Sweden and Slovenia in group B. 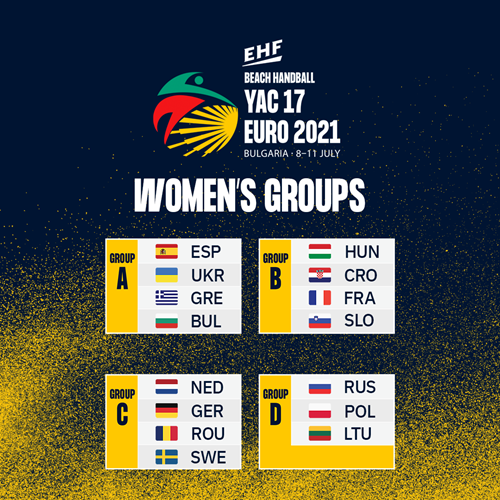 Just like in the men’s 17 event, Hungary were the silver medallists two years ago, and this week they are up against Croatia, France and Slovenia in group B.

Netherlands, who got the bronze in 2019, meet Germany, Romania and Sweden in group C, with Russia, Poland and Lithuania completing the event’s line-up in group D.

The YAC 17 Beach Handball EURO 2021 gets widespread coverage on the various EHF channels.

The venue includes a main court and three outside courts, with the matches on all four courts streamed live on EHFTV. Also, the Home of Handball social media channels on Twitter, Instagram and Facebook as well as the reports on eurohandball.com will keep all beach handball fans up to date throughout all the events.

Next Article Beach handball vacancies at the EHF