The EHF Champions League, Europe’s premium club handball competition, enters its 30th edition in September, and if the 29th season is anything to go by, there is much to look forward to.

The 2021/22 season was as popular as never before with its fans, as the competition reached new heights with its digital and TV audiences.

A combined 1.1 billion people were reached on digital channels and on TV resulting in a strong comeback of the competition following some Covid induced impacts in 2020/21.

The season’s digital coverage of Europe’s top-level club competition across the women’s and the men’s game attracted an audience of more than 650 million – a plus of 60% compared to the 2021/22 season.

The extensive digital coverage and strong social media performance of both EHF Champions League competitions have been a huge success factor resulting in the growth of the EHF CL community by more than 115,000 fans on Facebook, Instagram and Twitter in the past season.  Furthermore – boosted by dedicated short-form content around the EHF CL – the European Handball Federation’s TikTok channel ‘Home of Handball, grew by more than 400,000 to 530k followers.

To reach new markets and audiences, a total of 10,000 clips were produced as part of the the exclusive global media rights partnership with Infront and DAZN Group and distributed to all of the competition’s main stakeholders.

The digital success did not stop there. The pinnacle event of the men’s competition, the EHF FINAL4, offered handball enthusiasts more than 50 hours of uninterrupted streaming on Twitch during the event in Cologne, securing an 11%growth on the platform and turning it into a reference platform for European handball on Twitch. 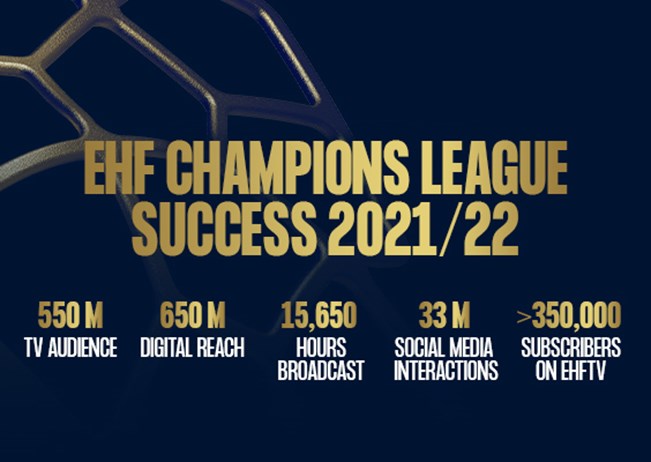 The spectacular finals of Vipers Kristiansand and Györi Audi ETO KC at the EHF FINAL4 Women in Budapest, as well as Barça and Lomza Vive Kielce at  Cologne, were the peak of the successful EHF Champions League campaign, which saw the competition also breaking records on TV.

40 official broadcasters were delivering thrilling matches all season round, attracting an audience of 550 million. The EHF FINAL4 Men 2022 alone generated record transmission numbers, with a cumulative audience of 60 million tuning in for the highlight weekend.