Data provide unique insights in handball matches and players. Data analyst and journalist Julian Rux has shared his findings on a regular basis during the Women’s EHF EURO 2022. Today, the last episode analyses the final.

A game of two halves

Bigger differences, however, were seen from the first to the second half. After 30 minutes Denmark led with three goals because they were much better at taking care of the ball. They had just two turnovers while Norway had six.

In the second half it was the other way round. Norway came back into the game because their defence forced Denmark to eight technical faults, even though Denmark were the team with the least number of turnovers of the tournament going into the final. At the same time, they only turned the ball over twice. These were spread over the whole team. In total, seven Danes lost the ball once or twice. 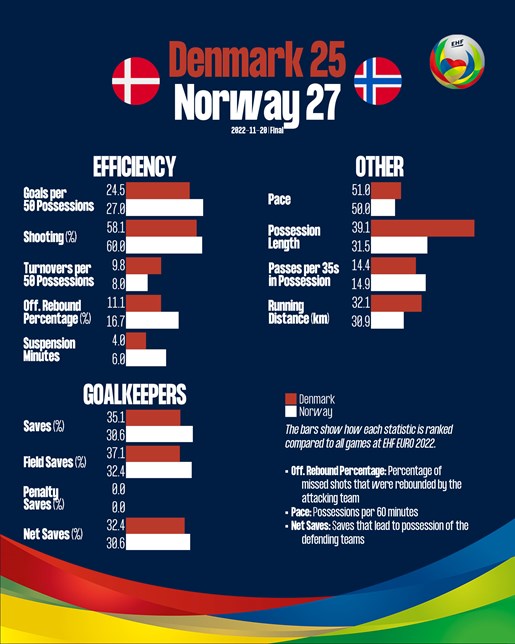 What was the same throughout the game was the pace. Both halves were relatively slow. As in every game at the EHF EURO 2022 Norway forced their opponents into long possessions. Denmark’s 39.1 seconds per possession was the longest possession length of all games at the EHF EURO 2022. While in their first encounter this was also the case, in the final Norway were able to capitalise on that with the many turnovers they forced in the second half.

Norway themselves, however, could not play as fast as usual, and attacks took on average 31.5 seconds – the second longest attacks they played in the tournament. Only against Sweden they were longer.

In the shooting percentages there were also no major changes from the first to the second half. In both halves Norway shot slightly better. Led by the once again outstanding Nora Mørk who scored eight goals at nine attempts, they converted 60 per cent of their attempts, while Denmark were at 58.1 per cent.

Interestingly, penalty throws were not much of an issue. Coming into the game Norway were the best penalty team with 96.3 per cent, while Denmark was the worst with just 64.3 per cent. In this game both teams just had two penalty throws and scored on both.

However, there were big efficiency differences comparing shots from areas. From more than 8.5 metres Norway scored an outstanding seven goals out of 11 shots (63.6 per cent). Denmark were only able to score one goal out of seven attempts from that distance (14.3 per cent). 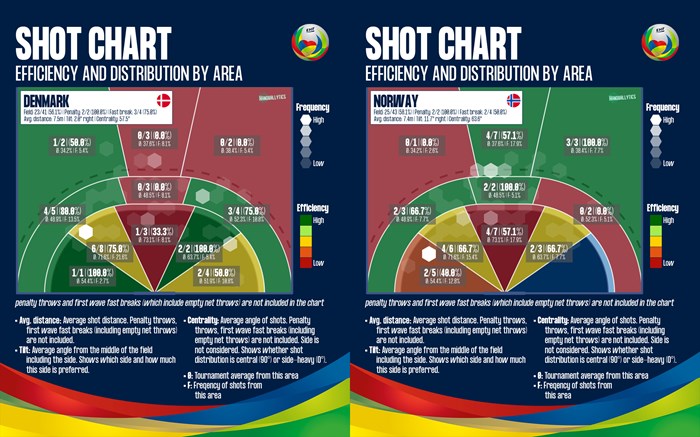 From between 6.5 and 8.5 metres both displayed similar efficiency. Denmark scored seven out of 12 goals (58.3 per cent), while Norway just had four of seven (57.1 per cent). Prior to the final both had their sweet spot in the centre, in the final only Norway was perfect from this position, with two goals from two attempts, while Denmark missed both of theirs.

For Norway first wave fast breaks were a problem again. Normally they are amongst the shots with the highest efficiency. However, Thorir Hergeirsson’s team only converted 63.6 per cent of them prior to the final. Only North Macedonia were worse.

In the final, Norway only scored two out of four attempts; luckily for them it didn’t come back to haunt them.

The average shot distance was for both teams a bit longer than their average which shows that both had problems getting the shots they wanted. At the same time, it made it a bit easier for the goalkeepers who were good on both sides. 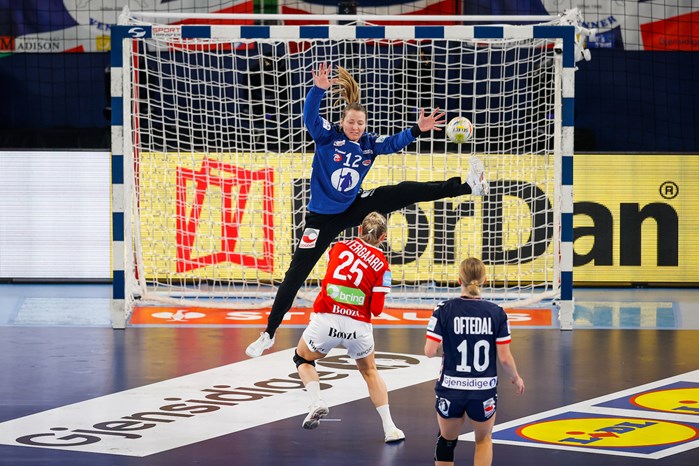 Silje Solberg, who overall had the best save percentage of the tournament with 40.9 per cent, saved a good 33.3 per cent of the shots on her goal in the final. Katrine Lunde, who played about half as long as Solberg, ended the game with a save percentage of 40.0 per cent.

For Denmark Sandra Toft played the whole final even though Althea Reinhardt had the better save percentage during the tournament. In the final Toft saved a solid 30.6 per cent but clearly lost the duel with Norway’s keepers.

All in all, Norway were the best team

Overall, Norway absolutely deserved to become European champions. They were not as dominant as two years ago, but still the best team by the numbers.

First decisions on the road to Paris 2024

FEATURE: Which European teams have already taken a step towards the next Olympic Games and which teams can follow in 2024?

OFFICIAL STATEMENT: Both the Spanish and the Turkish handball federation were fined for the incorrect implementation of the TV graphics duri…

Great Britain advance to next round of EHF EURO 2026 Qualifi…

DAY REVIEW: Great Britain advance to the next round after giving Malta a 44:14 defeat and Cyprus were unable to overcome the difference

DAY REVIEW: Two sides level on three points with one round of EHF EURO 2026 Qualifiers phase 1

DAY REVIEW: British comeback earn them a draw with Cyprus as qualification for the Men’s EHF EURO 2026 has started

Statement on the organisation of Women's EHF EURO 2024

Following statements in Hungarian media related to the organisation of Women's EHF EURO 2024, the EHF issues the following response

TEAM PRESENTATION #4: Great Britain. A young and talented squad should get the team to the next phase for the first time