With Metz Handball already confirmed for the EHF FINAL4 Women 2022, there are still three places up for grabs at the final tournament of the EHF Champions League 2021/22 when the competition heads into its quarter-finals this weekend.

Krim Mercator Ljubljana hope they can surprise reigning champions Vipers Kristiansand and qualify for what would be the Slovenian club’s maiden EHF FINAL4 appearance.

Following just one win from their first five matches, they welcomed former star Nataliya Derepasko as their new head coach in late October. Since then, Krim have found to their desired path.

Next up are Vipers in the quarter-finals, with the first leg scheduled in Ljubljana on Sunday (live on EHFTV at 14:00 CEST).

“The beginning of the season was hard for us. We came so close to winning in a few matches, trailing by one, and that wasn’t easy,” Krim's young but experienced left back Tjaša Stanko said.

“However, we stayed focused and patient, believing we can achieve more this season. That belief has brought us to the quarter-finals of the EHF Champions League.”

Krim and Vipers are no strangers to each other: they have faced eight times since their first duel in 2015, with the latest two matches coming as recent as this season’s group phase.

Vipers celebrated both times: the defending champions earned a narrow 27:26 win in Ljubljana in October but added a huge 37:20 home win in Norway in February.

“Upcoming are two tough games against the reigning champions. Vipers have many great players and they are one of the best teams right now. They are covered at each position,” Stanko said.

The two defeats in the group phase won’t count for much, according to the left back, who returned to Krim from Metz ahead of the 2021/22 season.

“These two upcoming matches will be something completely different. We respect them as our opponent but are also aware of all our qualities,” added Stanko, who netted total nine goals in those two matches.

A significant difference in the quarter-finals compared to the group phase duels is the mid-season arrival of Ana Gros.

The EHF Champions League top scorer from last season arrived at Krim from CSKA after the group phase. Gros immediately had a major impact in the play-offs, scoring 13 times in the first leg and 17 goals in total against FTC. 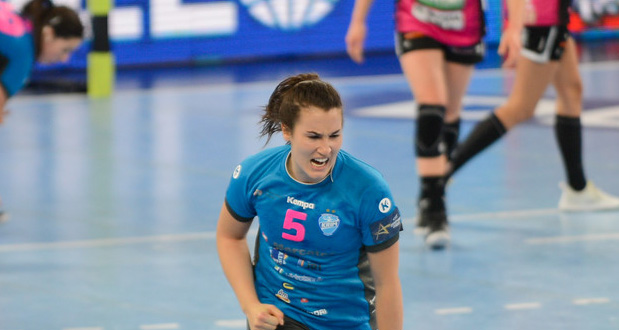 I am very happy with the situation we are in. We have a really good energy among the team. The return to Ljubljana has made me happy, I feel great here and both the team and I can progress even further.
Tjaša Stanko
Krim Mercator Ljubljana left back

Vipers won the trophy last season and had finished third two years earlier. They might be regarded by many as favourites against Krim, but the Slovenian side are eager to get back to where they once were, as winners in 2001 and 2003, and runners-up in 1999, 2004 and 2006

“Vipers are an amazing team: each player is top level with lots of experience. They have a good rotation on the back court positions. Also, they are very good with assisting the line player and have a great goalkeeper duo,” said Stanko, adding that Krim will rely on their home strength again.

“We showed already what it means to play at home and that we can be on a high level. No opponents have an easy time here. I hope we will continue that on Sunday, too.”

The 24-year-old Stanko started playing handball at the age of seven. Playing for Krim, she made the EHF Champions League All-star Team as best young player in 2017/18. After one season each with HC Podravka Vegeta and Metz, the left back is now back in Ljubljana.

It has been a good decision for both Stanko and the club, as she is the team’s second best scorer with 71 goals, three short of Katarina Krpez-Slezak’s tally.

“It is all about the team effort and, as a result, we are in the quarter-finals,” the Slovenian international said.

“I am very happy with the situation we are in. We have a really good energy among the team. The return to Ljubljana has made me happy, I feel great here and both the team and I can progress even further.”

The ‘Tigers’ receive strong support at home matches – and the club has called on their fans to come to the arena and turn it all blue on Sunday.

“People in Slovenia like to watch handball,” Stanko said. “I want as many people as possible to come to Stožice on Sunday. To create a special atmosphere together, bring us energy and thus help us in the fight against Vipers.”