The participants of this weekend’s EHF convention for heads of refereeing from member federations will get informed on four updates to the official rules of handball.

Per Morten Sødal, since 2021 the Chairman of the Playing Rules and Referees commission of the International Handball Federation, will explain the changes and rule interpretations, using a lot of video examples.

“The teachers must be educated before they can teach the referees in their federation. This convention is the ideal place to spread the knowledge. I hope for an intense discussion and exchange at the convention,” said Sødal, a former referee and delegate from Norway.

The updates to the existing rules have been tested in several countries and approved by the IHF Congress.

From 1 July, a resin-free ball can be used in handball matches. The new balls are smaller and lighter compared to regular balls and have a different kind of grip.

Only four instead of six passes will be allowed once referees have raised their arm to announce passive play.

“We have recognized that six passes can take extremely long, and we want to have more attacks in the match,” said Sødal.

The punishment remains the same: more than four passes while passive play has been announced lead to a free throw for the defending team.

In the current situation, a player must have one foot on the centre line when taking the throw-off. After the rule change on 1 July, the player has to stand with at least one foot in a new throw-off area, a circle with a diameter of four metres which is different in colour from the rest of the court or marked on the floor with tape. The use of the throw-off area is mandatory in all IHF events and professional matches, but otherwise centre-line rule can stay in place.

“The intention of this rule change is to speed up the matches and to make handball more attractive,” Sødal said. 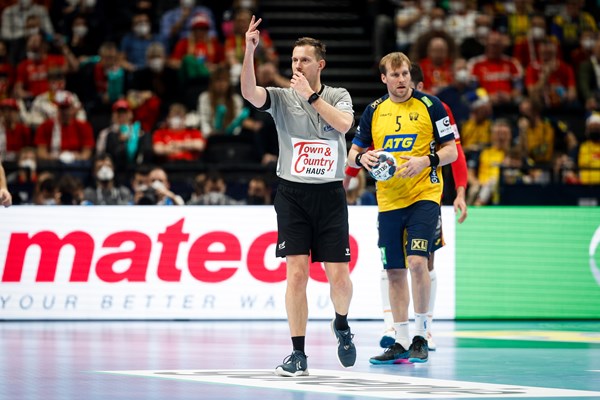 The updated rule only addresses shots that hot the head directly (“first point of contact”), not shots where the ball has touched another part of the goalkeeper’s body or the floor first. Also, the rule does not apply if the goalkeeper moves his head towards the ball in attempt to make a safe with his head. If a goalkeeper tries to provoke a two-minute suspension or red card, referees shall punish this behaviour progressively.

“The famous Swedish goalkeeper and now goalkeeper coach Mats Olsson is the founder of this rule change. Many goalkeepers suffered from head injuries after they were hit by the ball. We want to protect the health of the goalkeepers. And, therefore, the rule does not mention the face only, but the head,” Sødal said.

“The core statement of this rule change is that the thrower is responsible for his shot. But we want to avoid goalkeepers trying to provoke, for example by pretending they were hit to the head when the ball hit their chest.”

The update leaves the initial rule intact: If a player hits a goalkeeper in the head with a penalty shot, or a defender with a direct free throw, he will receive a red card and be sent off.

The changes to the rules become valid on 1 July 2022, though will already be applied at the IHF Women’s Junior World Championship in Slovenia, which starts end of June and ends on 3 July.

Next Article Referees and delegates nominated for EHF Finals Men

NEWS: EHF Master Coach Edwin Kippers will give a lecture on handball academies as part of the EHF Activities Webinar series

NEWS: After the opening in January, the second module of the EHF Master Coach Course 2022 was completed during the M20 EHF EURO 2022

NEWS: The second module of the EHF Master Coach Course 2022 will take place alongside the Men's 20 EHF EURO 2022 in Portugal

Webinar series starts with lecture on "Handball for Health"

How handball can combine the real and the digital worlds

NEWS: Three years of the certificate programme were awarded in Cologne, signifying the overcoming of a challenging period for the course

EHF Convention was “perfect to exchange ideas and knowledge”

NEWS: Last weekend’s Convention for Heads of Refereeing in Vienna has received positive reactions from all sides

Heads of refereeing gather for first convention in Vienna

Men’s EHF EURO 2022 analysis: The rising stars for the futur…

NEWS: Part three of the qualitative Men’s EHF EURO 2022 analyse focus on the talents of the tournament