Behind the scenes of the on-court excitement at an EHF EURO, the EHF Methods Commission are always working to provide a detailed analysis of the event. At the Men’s EHF EURO 2022, the most important development in the approach to this analysis focuses on providing increased visual aids for coaches to be able to put the knowledge gathered and examined into practice.

The group analysing the latest trends and development of the game is led by Methods Commission member Monique Tijsterman, who has extensive experience on the bench gathered since her own playing career. Tijsterman has led both young age category and the open Netherlands national team, and is also the only female coach to have won a European men’s national handball league and to have led an EHF Champions League Men club.

Helping coaches bring something new to their teams

It was based on her own experience that Tijsterman felt it was important to introduce a more visual element to the EHF EURO trends analysis.

“For me, it was important if we write an analysis and I have free hands, then I wanted for sure to make analyses also for coaches — that they can bring something back to their own club, to their own training,” says Tijsterman.  “For us, it’s really important that the coach who reads it and says, ‘okay, how can I translate that to my team, to my players?’”

The document presented at the end of the Men’s EHF EURO 2022 will be a comprehensive one featuring basic information such as an overview of the event, a general look at the participating teams, overall statistics, surprise sides, information on players, and a comparison between the 2020 edition and the 2022 event.

In the examination of differences between the 2020 and 2022 editions, Tijsterman and the four-person team she is working with to complete the analysis have noted variations in the number of players with clubs outside their own countries as well as an increase in the number of coaches leading foreign national teams.

“In the last EURO, there were four foreign coaches. Now they are nine, and I’m really asking myself why is that? Is it because the education in their own country is not good enough and they want to have more experienced coaches on the bench? So, for me, that’s really a nice topic — interesting to talk about and I hope also that I can speak to one or two coaches about why they think this is,” says Tijsterman, outlining how the percentage of foreign coaches leading EHF EURO 2022 teams stands at 37. 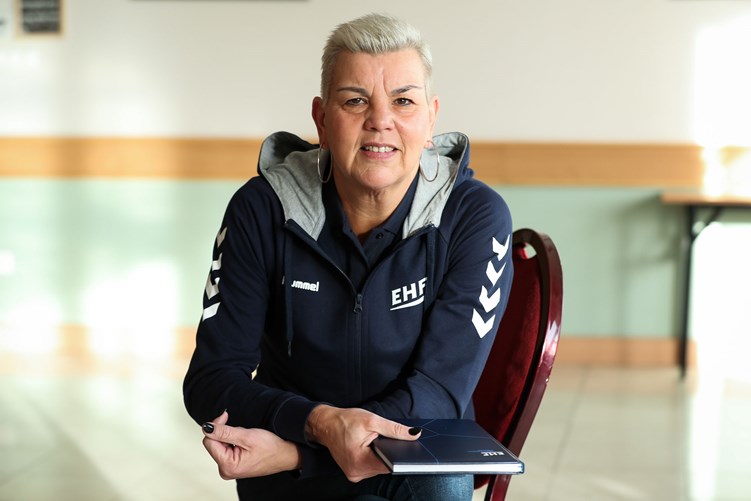 In terms of on-court trends, one key area to explore is defensive systems employed, especially by the top 12 teams — those in the main round. Tijsterman and her team will look at the way the teams play their own variations of 6-0 — clearly the most common system favoured — as well as their second-option defences.

And here is one area the visual representations will be available, with links to video clips of the teams to clearly show exactly how their systems work, as well as diagrams with comments made in a programme called ‘My Handball System’ created by Zoltan Marczinka, which can be viewed in both 2D and 3D. Tijsterman also notes a difference in the approaches based on region within Europe, and these will be explored in the final analysis as well.

How teams play seven-against-six, six-against-five and five-against-six in both defence and attack will also be examined. In terms of different attacking systems and trends, Tijsterman and the team have found an increase in the number of crosses with the line player along with even quicker transitions — a trend that has been steadily on the rise for some years but continues, seeing matches become even faster. Those using the analysis will be able to see videos and diagrams examining these attacking trends as well.

“I think there are really a lot of fast players — more than ever. Of course, we have the physical ones who are shooting from nine, 10 metres,” says Tijsterman, underlining that the increased speed does add to the appeal of the game. Tijsterman also sees that defence systems are becoming ever more offensive.

“I believe, but I have to look also at the statistics, that there aren’t so many two minutes, suspensions or yellow cards — or I think there are less hard fouls. So for me, that means that they are more trained on their feet.”

Finally, alongside the examinations of attack and defence, there will be an analysis of the different goalkeeper styles, complete with videos.

On an individual level, the team are also identifying a list of top five players, focused on less obvious elements such as who scores the most goals — more likely, for example, young players to watch for the future and players who stand out with their feint.

“We would put that also in a video clip and show how we can translate that to the training. What do you teach your children?” says Tijsterman, underlining how the final analysis is intended to be a working document. Ultimately, Tijsterman would like to be able to fully translate the analysis into specific training instructions for coaches.

Next Article Iceland dream of first semi-final since 2010

Webinar series starts with lecture on "Handball for Health"

How handball can combine the real and the digital worlds

NEWS: Three years of the certificate programme were awarded in Cologne, signifying the overcoming of a challenging period for the course

EHF Convention was “perfect to exchange ideas and knowledge”

NEWS: Last weekend’s Convention for Heads of Refereeing in Vienna has received positive reactions from all sides

FEATURE: Four updates of the official rules, taking effect on 1 July, will be presented at the EHF convention this weekend

Heads of refereeing gather for first convention in Vienna

Men’s EHF EURO 2022 analysis: The rising stars for the futur…

NEWS: Part three of the qualitative Men’s EHF EURO 2022 analyse focus on the talents of the tournament

Last chance to apply for next European Handball Manager prog…

NEWS: 20 places up for grabs on the popular programme at the German Sport University Cologne

NEWS: EHF experts publish qualitative analyses of the Men’s EHF EURO 2022 - in our first feature we focus on the results for the attack