Norway have announced Christian Berge’s successor at the helm of the men’s national team: Jonas Wille, current IFK Kristianstad coach and former national team assistant. Wille will step down from his role at Kristianstad to assume responsibility for the national side full-time at the end of June.

“I am very happy and proud to be offered such a big and great position in Norwegian handball. My motivation for embarking on such an important task is extremely high,” Wille told the Norwegian Handball Federation website.

Wille joined the staff of the Norway men’s team as assistant coach in the autumn of 2021, since when the national side placed fifth at the Men’s EHF EURO 2022, earning direct qualification for the World Championship next January. The World Championship in Poland and Sweden will be Wille’s first major task, and he will begin this summer aiming to build a large squad from which to draw as the team aim to return to the podium. 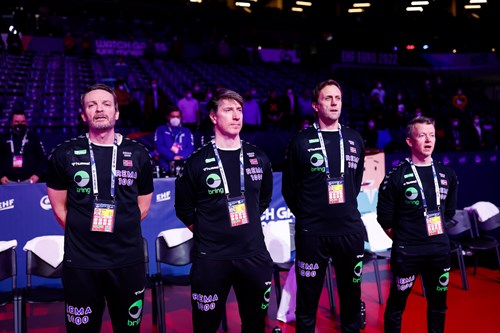 “We want to be a team that fights for medals in every championship, and we still dream of taking the gold. At the same time, we have a big job to do. And this applies not only to us who will work under the national team, but to everyone who is involved on the men's side in Norwegian handball — working together to develop more and better top players,” said Wille.

Wille sees it as key for clubs in Norway to feel a strong ownership of the national team, through their contribution in developing players and increasing depth. Wille’s goal will be helped by the fact that Norwegian men’s clubs have started to experience greater success, with Nærbo recently claiming the EHF European Cup title and Elverum making it to the play-offs of the EHF Champions League for the first time this season.

“We see that we are vulnerable in relation to the other teams that are ‘always’ in the semi-finals. For us to be stable there as well, the level of depth must also be higher. It is a big task we in Norwegian handball must take on,” said Wille.

Next Article How to follow the EHF FINAL4 Women 2022

NEWS: SAP Garden in Munich will not be finished in time; ‘Olympiahalle’ as possible alternative