With three EHF Champions League titles, three EHF Cup titles and one Cup Winners’ Cup in their trophy cabinet, Viborg HK are one of the most decorated club’s in women’s handball.

Yet after securing the Cup Winners’ Cup in the 2013/14 season, they have failed to reach the final of a European competition, missing out in dramatic fashion in two consecutive seasons in 2017/18 and 2018/19.

The tide might just turn, as the Danish powerhouse will now host the Energi Viborg EHF Finals 2022, with their sights clearly set on the trophy, which could be the first for many of Viborg’s players.

“I have many beautiful memories here, but we still have not won a trophy in the past years and we would like to change that,” says Line Haugsted, the longest-tenured player on Viborg’s roster.

Haugsted’s development has been nothing short of amazing at Viborg. She was already considered one of Denmark’s top future prospects when she was part of the team that won the gold medal at the IHF Youth Women’s World Championship in 2012.

But over the years, she became a dual-threat player, an amazing defender, who can single-handedly derail an attack, while also having a penchant for scoring goals, becoming the third top scorer this season for Viborg in the EHF European League Women, with 30 goals.

As Denmark finished fourth at the EHF EURO 2020, with a strong performance in the tournament they hosted, Haugsted has been a key player, being named as the All-Star defensive player of the competition, an integrant part of the Danish development.

For the past six years at Viborg, she has also been a cornerstone of the defence, helping her side evolve, as several pieces were also added to strengthen the team.

However, trophies eluded the Danish powerhouse, who finished third in the domestic league in the 2019/20 season and second in the 2020/21 season.

“Those have also been good memories, it was a very nice feeling to see that the work we put in was rewarded. But we are now aiming higher and dreaming to win a European competition, which would be amazing,” adds Haugsted. 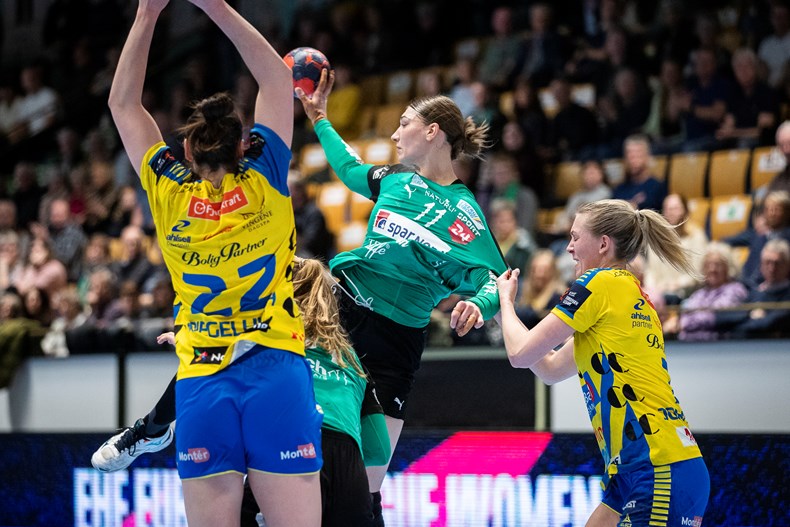 Viborg’s path to the Energi Viborg EHF Finals 2022 has not been flawless. They drew two matches in the group phase, away at SCM Ramnicu Valcea despite being down three goals in the 58th minute, and at home against Chambray Touraine Handball.

But the Danish side is one of the three teams, alongside Herning-Ikast Handbold and SG BBM Bietigheim, coming in unbeaten to the Energi Viborg EHF Finals 2022. The only difference is that the other two are riding eight-game winning streaks, while Viborg have six wins and two draws.

The numbers do not faze Haugsted, who is confident that playing on their home court, where Viborg dropped only two games in the past four seasons when they played in European competitions, is paramount to their success.

“I would like to see as many green people as possible, our fans are great. It is an advantage, we know the arena very well, because we go there almost every day, so it could tilt the scales into our way.

“That should suit us well, so I really hope we can win the first game, against Baia Mare, and then fight for the trophy. It would be huge,” says Haugsted.

Pastures new in the summer

It would be huge indeed for the 27-year-old Danish left back, who made a big decision this winter. After six years at Viborg, she would change the green shirt for another green shirt, signing for Hungarian powerhouse Györi Audi ETO KC.

Leaving on a high is definitely on Haugsted’s agenda, with Viborg HK being an important part of her career. And the first step towards a trophy is winning against CS Minaur Baia Mare, a team that is returning to the EHF Finals for the second year in a row, despite conceding three losses in the group phase.

“I would not say we are definitely favourites but we have an advantage because we play at home, in front of our fans.

“Baia Mare have been here already, they know what it means to play for a trophy in two days, therefore we will need to tread carefully to take everything we can from this game,” says the Danish left back.

But what about the final?

“If we get there, and that is a big if, because we do not think that it will be easy to qualify, I would like to play against Bietigheim, a team that we do not know very well.

“It is no disrespect to Herning-Ikast, we know them very well from the Danish league, they are very strong, but maybe it is better to play against a team that we face for the first time,” concludes Haugsted.

Whether Haugsted will leave on a high, with her first trophy in her hands, there is still to be seen.

What is certain is that Viborg’s green fans will definitely flock to the arena to cheer for their favourites to win their first European trophy in eight years.

The Energi Viborg EHF Finals will take place on 14 and 15 May at the VIBOCOLD Arena in Viborg, Denmark. Secure your tickets to see Line Haugsted and more world-class players HERE.

Next Article This is me: Kentin Mahe

TALKING PIONTS: What we will remember of the EHF European League Men 2021/22 after Benfica lifted the trophy