Frey aiming to end Herning-Ikast stint on a high

No team has won more games in the EHF European League Women than Herning-Ikast Handbold since the second-tier competition of the European club pyramid was rebranded before the 2020/21 season.

The Danish powerhouse won 15 their 18 games in the past two seasons and were unbeatable this time around, sweeping aside their opponents to reach the Energi Viborg EHF Finals for the second time in a row.

“It has been a spectacular journey and we had some very good games up until this point, so that makes us confident for the Energi Viborg EHF Finals,” said Sonja Frey, Herning-Ikast's Austrian centre back.

The 29-year-old centre back was ushered into the team last summer as a marquee signing from Team Esbjerg, Herning-Ikast’s rivals in the strong Danish league. Frey, who has six seasons under her belt in the EHF Champions League Women for Thüringer HC and Esbjerg, was seen as the missing piece of the puzzle that could propel Herning-Ikast to silverware.

An old-school centre back, Frey can score goals but is more likely to be the assist provider and create a shot out of nothing for her teammates. Although Frey was hampered by injuries throughout the season, she still was able to contribute with 29 goals in Herning's eight games in the EHF European League Women this season.

“I did not play as much I would have liked, because of several injuries, but I feel fine now and that is important, because it is the end of the season and there are many important matches now,” added Frey.

One of them is scheduled for Saturday, 14 May, when Herning-Ikast Handbold face SG BBM Bietigheim, the German powerhouse club that has won all of their games this season, including eight in the EHF European League Women.

It could be seen as cynical, but the draw was ruthless and the first defeat for one of the sides will mean that they are out of contention for the trophy, despite winning eight games on the trot to reach the semi-final stage.

Frey, who has played for Bietigheim's domestic rivals, Thüringer HC, between 2012 and 2016, knows a thing or two about German handball, as she is coached by Thüringer HC's coach, Herbert Müller, at the Austria women’s senior national team.

“Bietigheim have been playing great in the past season and won all their games, so I think they are the favourites. They are a more experienced team and I think we will need to step it up a bit to make it tough for them,” said Frey. 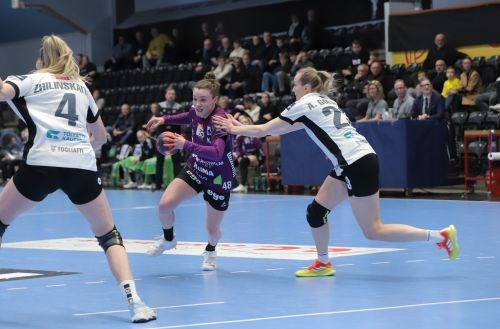 The Austrian centre back says that she did not speak to Müller about a piece of advice about how to stop Bietigheim, yet she knows her opponents well. Bietigheim's captain, Danick Snelder, was Frey’s teammate at Bietigheim for four years.

“I have remained in contact with German handball, so I know what they can do pretty well. But we are also a good team and we can win against them,” added Frey, who has never won an European competition before, despite this being her 10th season playing in a European club competition.

It will also be an emotional tournament for Frey, who will leave Herning-Ikast at the end of the season. Initially, the Austrian centre back signed a two-year contract with the Danish side, but the agreement was cut short by mutual consent.

Frey will re-join Thüringer HC, with the move prompted by the Austrian playmaker's desire to pursue a part-time career in physiotherapy.

“I have always been interested in the human body, because since I was little, I had some trouble with my feet. So I was eager to study, to try and find solutions to help myself and others. It is such a complex organism, with so many intertwined mechanisms, it is truly fascinating to watch it and analyse it.”

“Therefore, I am also a physiotherapist, I have always liked to see how to get back from injuries and recover correctly. I also need a bit of a break from handball on a day-by-day basis, I need to rewire my brain to think differently,” added Frey.

Would Frey also want to be a physiotherapist for a handball team?

“Right now, no. It is a much more complex job than I intend to take on now, because players have different habits when they try to rehab their injuries,” said the Austrian centre back.

Helping Herning-Ikast win their seventh European trophy would be a perfect goodbye for a player who gave everything on the court each time.

“We are a young team and I always like to play with younger players, because they are eager to learn, they want to be better and better each time,” concluded Frey, whose team has an average age of 23 years old, 4.1 years younger than Bietigheim.

Whether this thought becomes reality, only the Energi Viborg EHF Finals will tell us. Last season, Herning-Ikast lost both their games in Baia Mare, against CS Minaur Baia Mare and Siófok KC, to finish fourth in the EHF European League Women.

This time around, in Denmark, they will aim higher and higher.

The Energi Viborg EHF Finals will take place on 14 and 15 May at the VIBOCOLD Arena in Viborg, Denmark. Secure your tickets to see Sonja Frey and more top players in action HERE.

Next Article Lauge: "We cannot make any mistakes against Aalborg"

TALKING POINTS: What will we remember from the Energi Viborg EHF Finals and the EHF European League season?