The 24 teams that will vie for the EHF EURO 2022 title learned who they will face in the first stage of the event when the draw took place on Thursday. The draw was held in Budapest, where the next Men’s EHF EURO champions will be crowned after the final on 30 January next year.

Plenty of top-class matches can be expected in the opening stage of the EHF EURO, with defending champions Spain set to take on World Championship 2021 and EHF EURO 2018 silver medallists Sweden as a highlight match in group E.

EHF EURO 2020 runners-up Croatia were drawn into group C, where they will meet familiar rivals France and Serbia, along with Ukraine. Bronze medallists from the 2020 edition, Norway, will meet Russia, Slovakia and Lithuania in group F.

Group A not only features several regional derbies, but sees almost an exact repeat of what was a thrilling preliminary round at the EHF EURO 2018, with EHF EURO 2020 semi-finalists Slovenia, North Macedonia and Montenegro all drawn into that group. Rounding out the group are none other than back-to-back world champions Denmark. 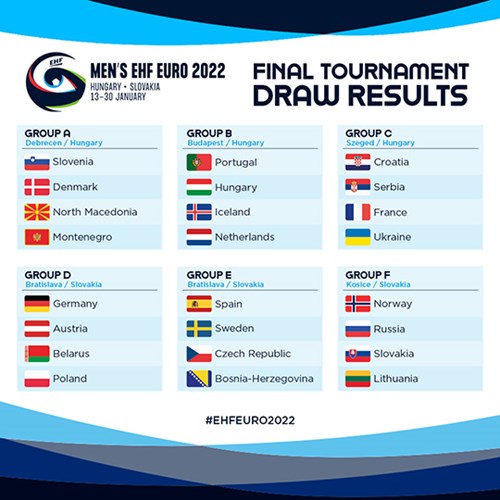 Each of the host countries will be home to three preliminary round groups. In Hungary, group A will play in Debrecen, group B will be in Budapest and group C will be in Szeged. In Slovakia, group D and E will be based in Bratislava, and group F will play in Kosice.

The two main round groups will be hosted in Bratislava and Budapest, before the top six teams converge in Budapest for the final weekend that will determine the winners through to sixth position on the ranking.

The 'Ultimate iBall' saw the light of day at Thursday’s draw event and will eventually star in all 65 matches.

SUMMARY: The draw for the Men's EHF EURO 2022 took place in Budapest on Thursday, with the 24 teams learning their preliminary round opponen…

NEWS: A mischievous deer is the official mascot of the Men’s EHF EURO 2022 and fans can vote for his name now

Bodniyeva takes over as head coach of Russian women

NEWS: The two-time world champion replaces Alexei Alekseev and will first lead the team in the EHF EURO 2022 qualifiers in October

NEWS: With the Men’s EHF EURO 2022 now just four months away, the referees for the event are announced