Corrales and Maqueda keen for 'home' weekend in Budapest

They were dancing on court with the pressure off their backs when the final buzzer sounded on Tuesday night. Thanks to a tight 28:27 victory against Poland in their last main round match at Bratislava, Spain managed to qualify for their sixth straight EHF EURO semi-final in a row.

But two players in particular had special emotions when the ticket was booked, as the final weekend of the EHF EURO 2022 will be a kind of homecoming for right back Jorge Maqueda and goalkeeper Rodrigo Corrales.

Both have played for Telekom Veszprém in Hungary since 2020, and Maqueda has been in the country since 2018, when he joined Pick Szeged from HC Vardar. Next season, Maqueda will return to where his international career had started – French side HBC Nantes.

Before then, the tall left-handed shooter is eager to add another medal to his packed cabinet. Maqueda already has a full set of EHF EURO medals from 2014, 2016 and 2020, plus a world championship gold medal from 2013 and Olympic bronze from last year. He was also named to the EHF EURO 2020 All-star Team.

“It will be so great to play in this huge arena in Budapest. Hungary is handball-crazy. I really hope that the arena will be full for our two matches at Budapest – and that many of our Veszprém fans and my friends will come to support us,” says Maqueda.

“Right after we made it to the semi-final, I already have so many text messages on my mobile phone. So many people want to come to Budapest and are looking for tickets. It will be a great weekend for handball,” he adds. 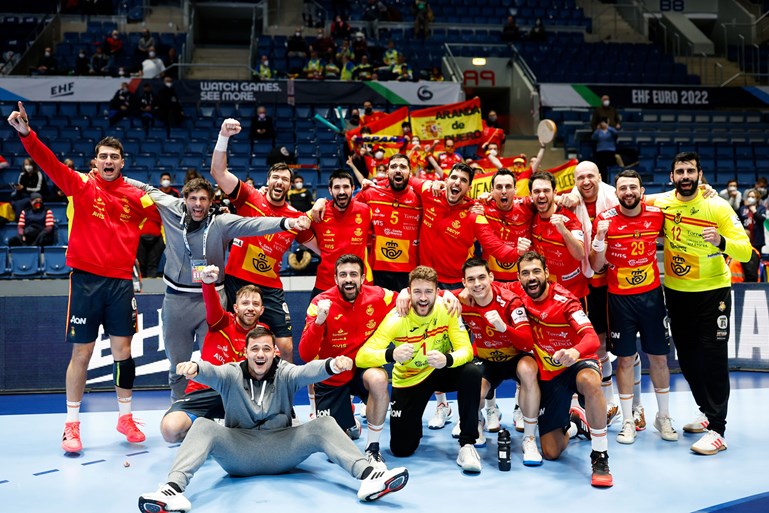 His Spain and Veszprém teammate Rodrigo Corrales – two-time EHF EURO champion in 2018 and 2020 - shares those hopes for an unforgettable weekend in Budapest.

“When I was watching the draw, I had crossed my fingers so much that we finally play in Hungary, my home. Therefore, it is really great for me to go to Budapest and play there for the medals. It was my goal and I have been talking with my Veszprém teammates all the time about it,” Corrales says.

The enthusiastic and familiar support of Hungarian fans in the arena could help lift Corrales, Maqueda and their teammates as they go in search of a third consecutive title. And even neutral supporters in Budapest will certainly witness a true handball spectacle as some of the best teams in the world clash for the coveted EHF EURO trophy.

Get your tickets to see Rodrigo Corrales, Jorge Maqueda and their teammates in the final weekend here

GROUP II REVIEW: Spain secured their sixth win at the EHF EURO 2022 to progress to the semi-finals for the sixth time in a row

Next Article The race for the final weekend

NEWS: The European Handball Federations has published the playing times for the Women’s EHF EURO 2022 with co-hosts Slovenia facing Denmark…

“Our fans will be an additional player”

NEWS: Packages now available to supporters ahead of the final tournament in November

DRAW REVIEW: The draw at the Ljubljana castle set all four preliminary round groups for the 15th edition of the Women's EHF EURO