Breistøl ready to make it a dream season with Esbjerg

There were only 13 seconds left on the clock and Kristine Breistøl had just thrown a hail Mary pass on Team Esbjerg’s last attack of the Match of the Week against CSM Bucuresti.

Her fellow Norwegian Malin Aune intercepted it and CSM looked to have the last laugh. But when Eduarda Amorim tried an open-goal shot, Esbjerg’s goalkeeper, Dinah Eckerle, made a speedy comeback and caught the ball.

Eventually, the Danish side scored a last-gasp goal through Vilde Ingstad and sealed a crucial 26:25 win in the first leg of the EHF Champions League Women quarter-finals.

“It was a mistake from me, but my teammates acted quickly and took advantage of CSM’s error,” says Breistøl, the Player of the Match of the Week, who scored seven goals against the Romanian champions.

It was the kind of team spirit that lifted Esbjerg to the heights needed to challenge for their first European silverware.

In the group phase, Esbjerg dropped a single game; the team is now on a 13-game unbeaten streak, their longest in the competition. They won seven out of seven at home, in the Blue Water Dokken, and will make the EHF FINAL4 for the first time in their history were that streak to be preserved.

“We have a great team spirit this season and everything looks to be good with the team, even in the toughest of moments. We have forged a bond and we really eye the EHF FINAL4 in Budapest, we did throughout the whole season,” adds Breistøl.

The towering left back, at 1.93m the second-tallest player in the competition, Breistøl has been nothing short of spectacular this season. Her partnership with fellow Norwegian back Henny Reistad yielded amazing results, with the two players combining for 151 goals in the first 15 matches of the season.

For Breistøl, the 69 goals she scored throughout the season are a personal best, a constant progress since she signed in the 2018/19 season with Esbjerg, as one of the first Norwegian players to play for the Danish side.

“We have constantly been getting better and better, trying to improve on a season-by-season basis. This is our third consecutive year in the EHF Champions League Women, so we can consider ourselves an experienced team,” says Breistøl.

“The team was strengthened consistently in the past seasons, but getting Henny Reistad here really tipped the balance into our favour. Defences now need to pay more attention to her, which means for the other backs, things are a bit easier. So we now have more chances to shoot than before and we can have easier shots to try.” 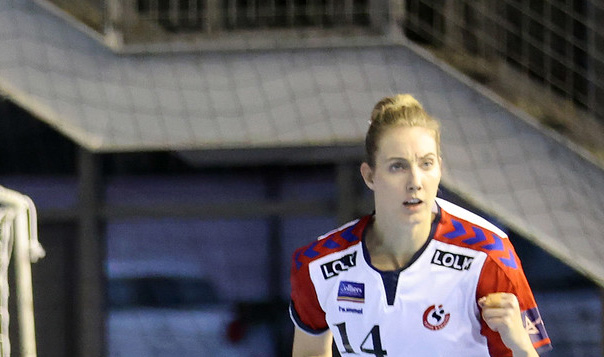 With our fans behind us, playing on our court, we are closer to qualifying than we were before the first leg. And making it to Budapest would really confirm this to be a dream season.
Kristine Breistøl
Team Esbjerg left back

Her seven goals, which helped seal the Player of the Match of the Week award, were crucial in Esbjerg’s win against CSM, just like Breistøl’s performances throughout the season. The Norwegian left back scored at least seven goals on seven occasions this season.

Performances like this have seen her involved in Norway’s squad at recent championships. In the last two years, Breistøl won the EHF EURO 2020 and the 2021 IHF Women’s World Championship, adding a bronze medal at the Tokyo 2020 Olympic Games in a star-studded line-up.

In total, Esbjerg boast six European champions in 2020 and five world champions in 2021 from the six Norwegian players they currently have in the squad. The number will stay the same in the 2022/23 season when line player Marit Frafjord retires, but right back Nora Mork comes in to strengthen the squad.

“Of course, it helps because we forged a bond that is very strong. I am honoured to be a part of the Norway women’s national team because it is a very strong team.

“I am also happy that I have been getting better and better and, more importantly, more constant. In the previous years, I had plenty of issues with injuries and that hampered my progress, but I can say that these have been the best seasons in my career,” adds Breistøl.

WATCH: Kristine Breistøl has been full of tricks for @TeamEsbjerg in the #ehfcl #MOTW with her creativity setting up goals galore

With such a great season behind them, Esbjerg need only 60 good minutes against CSM Bucuresti in the second leg to write history.

A Danish team has not qualified for the EHF FINAL4 since the inaugural edition, in 2014, when FC Midtjylland, currently Herning-Ikast Handbold, finished fourth.

But Esbjerg are aiming high, irrespective of the opponent. Their last five matches against CSM have been decided by two goals or less, with the Danish side taking two one-goal wins, CSM taking a one-goal and a two-goal win, while another game finished in a deadlock, 29:29. Therefore, Breistøl is cautiously optimistic before Sunday’s game.

“While we are experienced now, CSM have played in this situation many more times than us, so we have to be careful. Our games against them have been very balanced, so the nature of these matches makes us be cautious.”

“But with our fans behind us, playing on our court, we are closer to qualifying than we were before the first leg. And making it to Budapest would really confirm this to be a dream season,” concludes Breistøl.

Court of Handball bans Monar from Nantes for two matches

OFFICIAL STATEMENT: The court has decided that his foul in the third round against Elverum deserves further punishment.