A close look at Iceland's success

The EHF EURO 2022 has brought us a lot of surprises. The Netherlands have delighted with their fast style of play, Russia convinced with ‘old school’ handball and Montenegro have become the darling of many fans because they play with so much effort and heart.

But probably the biggest surprise is Iceland. After yesterday's outstanding 29:21 win over Olympic gold medallists France, their door to the semi-finals is still wide open.

The keys against France

In the press conference after the probably biggest upset of the tournament so far Iceland’s coach Gudmundur Gudmundsson said the preparation for the match did not even include the usual videos of the opponent. Instead, they were simply looking at a tactics board to find solutions for their own attack because eight key players were missing.

The solution they came up with was to play with two left-handers, Ómar Ingi Magnusson and Viggo Kristjánsson, in the backcourt together. And it worked extremely well. Together they scored 19 of Iceland’s 29 goals and overall, 22 goals were scored by left-handed players.

Besides surprising France’s defence with a left-hander as centre back, which is of course an unusual situation for the defenders, the key for Iceland was to slow the game down. Both teams had 49 possessions, which is exactly Iceland’s average at the EHF EURO 2022. 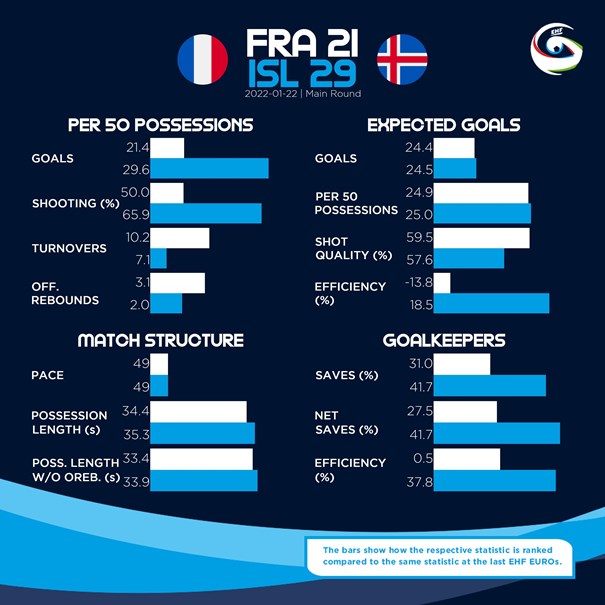 France, however, love to play very fast-paced handball and run fastbreaks as often as possible. Guillaume Gille’s team had an average of 54.0 possessions coming into the game, the second highest number after the Netherlands (54.7).

But Iceland did not allow France to play out their pace; they limited turnovers to just seven and when they lost the ball, they ran back with all their might and played outstanding transition defence.

Of course, the great defence against France was also supported by probably even better goalkeeping by Viktor Hallgrímsson. The usual backup to the Covid-infected Björgvin Pall Gustavsson showed perhaps the best game of his young career. The 21-year-old saved 44.1 per cent of shots on target, the best number amongst all keepers that faced at least 28 shots at the EHF EURO 2022.

Before Hallgrímsson’s break-out showing Iceland’s goalkeeper performance was one of their weaknesses. Only 23.1 per cent of the shots they faced were saved before yesterday, the third worst amongst remaining teams.

To have a real chance of reaching the semi-finals, they need more consistent performances at a higher level by their goalkeepers. However, with yesterday's performance, they are now also at a statistically average level, as they are in practically all relevant statistical categories.

By the numbers they might even be somewhat undervalued, as they had probably the most difficult preliminary round group against Portugal, Hungary and the Netherlands. Their rivals for the semi-finals with better statistics were able to improve these against opponents who probably were overall somewhat weaker. 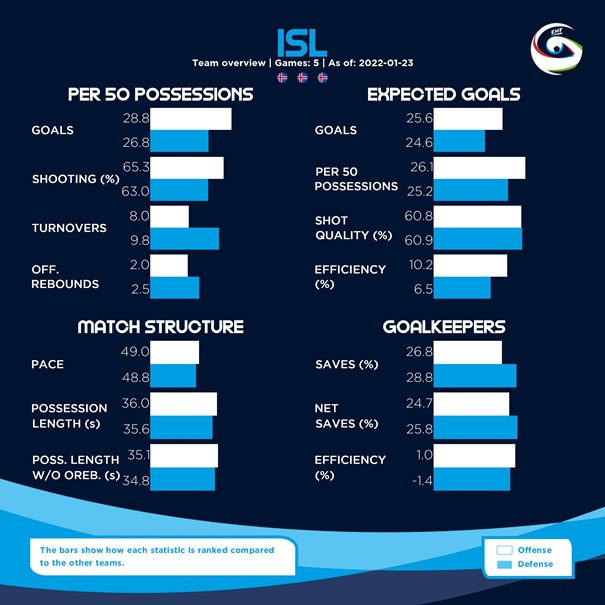 Especially without Aron Palmarsson, Magnusson has become clearly the central player of Iceland’s offence. With 5:43 minutes’ ball possession per game he is the man who holds the ball most in his hands for his team, and fourth on this metric among players in teams that are still in the tournament. He is the one making the decisions on the field for Iceland.

With 6.6 goals per game (2.4 penalties, 75 per cent overall) Magnusson is currently the seventh-best scorer in the tournament and clearly the number one on his team. In addition, he also always has an eye for the teammates, dishing out three assists per game.

The top scorer of the last German Bundesliga season was at times unstoppable for the French defenders and scored at will. From the 18th to the 27th minute he scored five goals in a row for his team.

In the end, 10 goals from 13 attempts, including three penalties, and three assists stood next to his name. In addition, he had the ball in his hands for 7:47 minutes. Only nine higher values were measured at the EHF EURO 2022.

Should Magnusson join the other Icelandic players in isolation, Iceland can probably bury their semi-final dreams. But yesterday they showed what the team is capable of. If they actually get one or two players back, everything is possible for them.

Breaking down the EHF EURO 2024 qualifiers

FEATURE: Following last week’s draw event, we now know the path to Germany 2024 for the 32 contenders