Handball has seen many siblings play the sport at a high level, but the Smits family from the Dutch village of Geleen sets the benchmark. Inger and Kay are both playing in the EHF Champions League and are internationals for Netherlands – just like brother Jorn is and both their parents were.

The family history started with Cecile Leenen and Gino Smits both playing for the Dutch national teams; Cecile even played more than 100 times in the orange jersey. Gino became a coach after his playing career, currently leading the women’s 17 national team of Germany.

Their three kids Jorn (30), Inger (28) and Kay (25) started playing handball as well, of course, and they have all become national team players, too.

“We have handball in our genes, definitely,” Inger Smits says. “We went to the arenas as kids when my father was coaching. We never watched the games, but only played with the handballs.”

Still, it was not set in stone that Inger and her two brothers would become top-level handball players.

“We are a very sportive family, we love sports, and besides handball me and my siblings practiced many other sports. Our parents did not force us to play handball, but in the end, all three of us took the decision to play it,” says Inger Smits, adding the trio got “a lot of advice” from their father.

Meanwhile, Inger is a centre back for SG BBM Bietigheim; they meet Brest Bretagne Handball on Sunday (live on EHFTV at 16:00 CET) when the EHF Champions League Women resumes after the EHF EURO break.

Right back Kay also plays in the German Bundesliga – for SC Magdeburg, and they have an away game at FC Porto in the Machineseeker EHF Champions League coming up tonight (live on EHFTV at 20:45 CET).

“It is something special, as it is quite rare,” Inger Smits says about she and her brother playing in Europe’s top flight.

Jorn is a left back with Lemvig-Thyborøn Håndbold in Denmark.

And all three are internationals for ‘Oranje’: Inger won the world title in 2019 and was a leading player for sixth-place Netherlands at the recent Women’s EHF EURO 2022, and both Kay and Jorn are part of the Dutch squad for the 2023 IHF Men’s World Championship next month.

“We watched the national teams – and all of us had the dream to make something big in handball, and we did,” Inger Smits says. 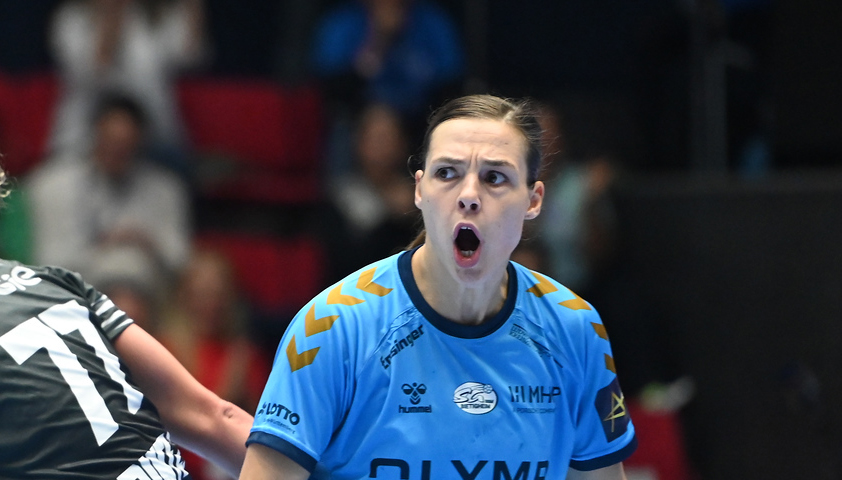 Kay is the better player compared to me, he has more talent and potential than I have. He can reach much more than I have done on an individual level, but maybe he will not become world champion like me.
Inger Smits
SG BBM Bietigheim and Netherlands centre back

Last season, both Inger and Kay became German champions with their clubs Bietigheim and Magdeburg, both were in the German cup final – Inger won, Kay lost – and both were in the final of their respective EHF European League: again, Inger won against Viborg HK, Kay lost against S.L. Benfica.

“The day that Kay played the European League final in Lisbon, we won the German cup and had a party. But of course, I was watching his match on my mobile phone,” Inger Smits says.

Also, Kay Smits has been watching his sister’s matches at the EHF EURO.

“Of course, I want to see as many of Inger’s games as possible,” the only left-hander of the three Smits siblings says.

“I am very happy when Inger plays successfully, whether in a club or in the national team. I keep my fingers crossed for Inger.”

Although they both play in Germany, actually visiting each other’s matches is almost impossible.

“If it fits, we try to see each other, but due to the tight schedule of our clubs, it is more or less Christmas and in the summer. During the EHF EURO, we were constantly in contact with the whole family, but we didn’t talk much about tactical things, they wished me all the best,” says Inger Smits.

How does Inger compare herself to Kay?

“Kay is the better player compared to me, he has more talent and potential than I have. He can reach much more than I have done on an individual level, but maybe he will not become world champion like me,” Inger Smits says.

One dream they share both for June 2023, Inger reveals: “Two Smits at the two EHF FINAL4 events of the Champions League would be simply brilliant.”

Next Article Ghedbane shines as Dinamo take a win in Plock

OFFICIAL STATEMENT: Both the Spanish and the Turkish handball federation were fined for the incorrect implementation of the TV graphics duri…

Great Britain advance to next round of EHF EURO 2026 Qualifi…

DAY REVIEW: Great Britain advance to the next round after giving Malta a 44:14 defeat and Cyprus were unable to overcome the difference

DAY REVIEW: Two sides level on three points with one round of EHF EURO 2026 Qualifiers phase 1

DAY REVIEW: British comeback earn them a draw with Cyprus as qualification for the Men’s EHF EURO 2026 has started

Statement on the organisation of Women's EHF EURO 2024

Following statements in Hungarian media related to the organisation of Women's EHF EURO 2024, the EHF issues the following response

TEAM PRESENTATION #4: Great Britain. A young and talented squad should get the team to the next phase for the first time

For Malta it is all about development

TEAM PRESENTATION #3: After getting hit hard by the pandemic, the Maltese men’s team has its re-start at the EHF EURO 2026 qualifiers in Aze…

PREVIEW: Four teams will meet this weekend as the qualification process for the Men's EHF EURO 2026 in Denmark, Norway and Sweden begins

TEAM PRESENTATION #2: Cyprus are four years without a win in the EHF EURO Qualifiers, and are hoping to break that streak this weekend in Ba…