The Summer Blog on eurohandball.com guides you through all the action at the various Younger Age Category (YAC) and beach handball events taking place this summer.

The coverage on the Summer Blog ends here for this bumper Sunday. We are back tomorrow morning and will look back with lots of trophy pictures.

For now, the newly crowned Men's 20 EHF Championship winners wave goodnight to you: 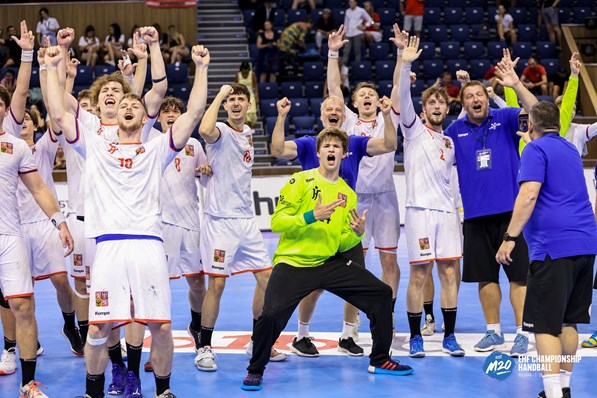 Being the M19 EHF EURO 2021 champions, Germany are among the main favourites for the title at the M20 EHF EURO 2022 in Portugal. No wonder that Germany left back Matthes Langhoff, who was named Man of the Match against Iceland, is satisfied that his team has taken the first step tonight: qualifying for the main round. 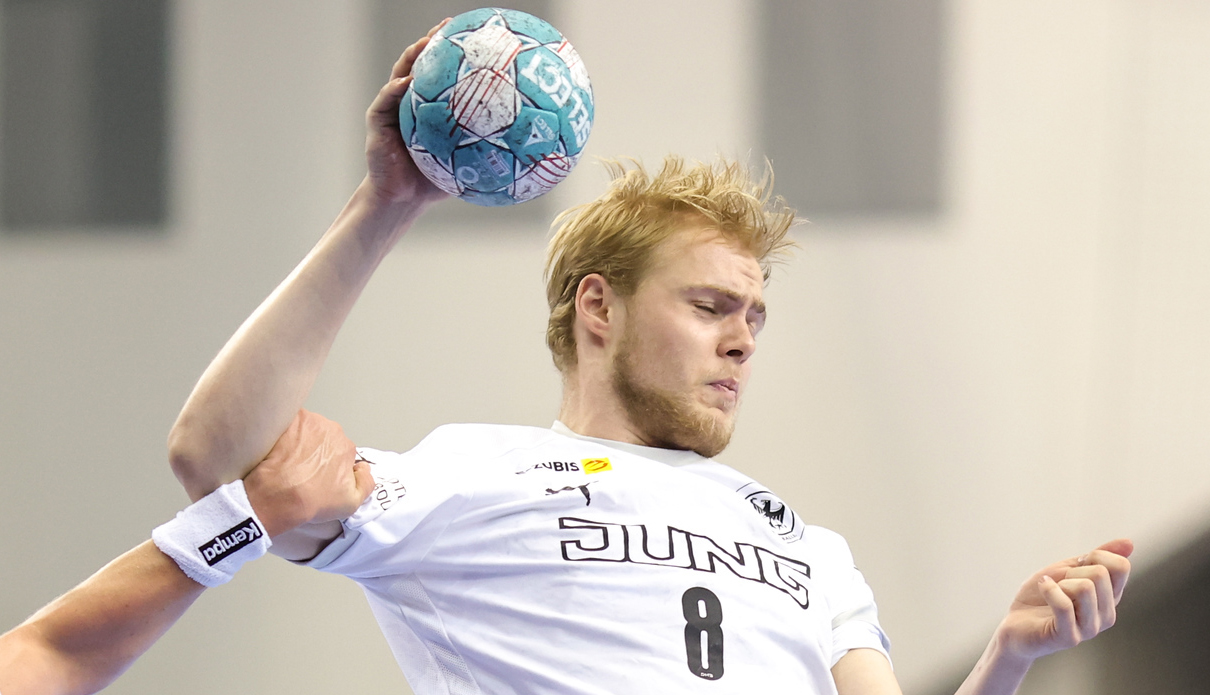 In the end, it just counts that we won. For me, personally, I do whatever my team needs me to do and I give my best. Now we go to the main round and need to keep it going and keep the energy up for the next few games.
Matthes Langhoff
Germany M20 national team left back

With the final two matches of the preliminary round at the M20 EHF EURO underway, let's have a look at what happened earlier tonight:

Both teams were already out of the race for the main round, as Spain and Portugal locked up the top two spots on Friday.

The win puts Germany in the lead of the group and through to the main round: Italy and Serbia are still playing against each other, but they cannot both overtake Germany.

Netherlands were one of the teams - literally - running away with a Ticket to Nazaré... 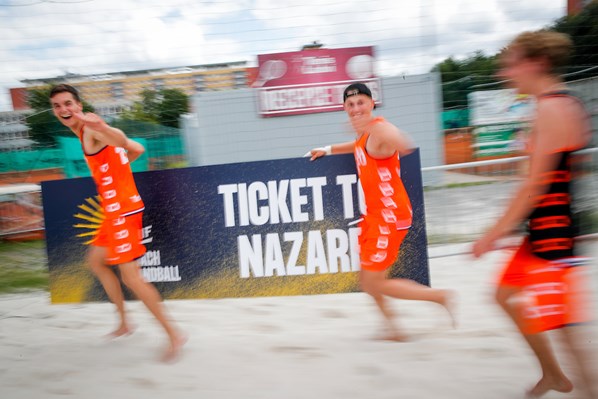 ... and here is an overview of other teams that made the cut for Portugal 2023:

The Hungarian women's team complete their nation's more than successful campaigns at the various beach handball events in Prague. They beat Poland 2:1 in women's final of the EHF Beach Handball Championship 2022.

Poland won the first set 17:14 but Hungary dominated the second (29:16) before coming from behind to take the shootout as well. 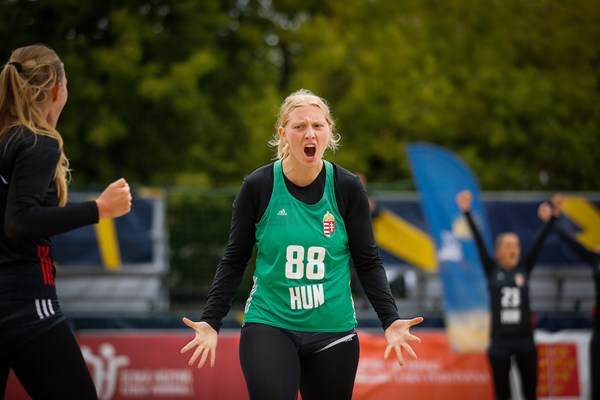 Germany have done it!

They come from behind to beat Hungary 2:1 in the men's final of the EHF Beach Handball Championship 2022 in Prague. Germany lost the first set 25:22 after leading it until close to the end, but won the second by the same margin (28:25) before missing only once in the shootout: 8:6. 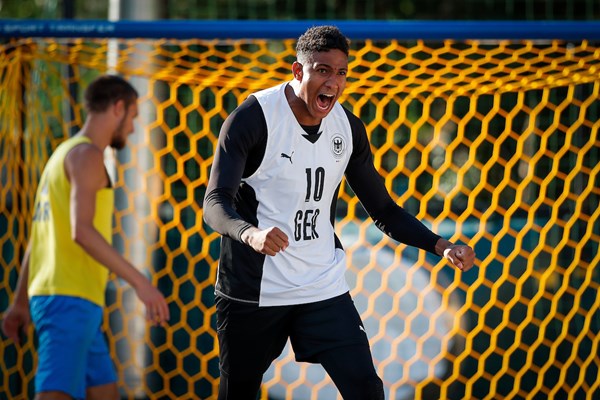 Talking about Czech Republic... quickly back to the beach in Prague. The men's final Hungary vs Germany of the EHF Beach Handball Championship 2022 is underway live on EHFTV.

In the women's competition, the bronze medal has gone to Croatia, who win two narrow sets (27:24, 23:22) to get the better of France. Well played! 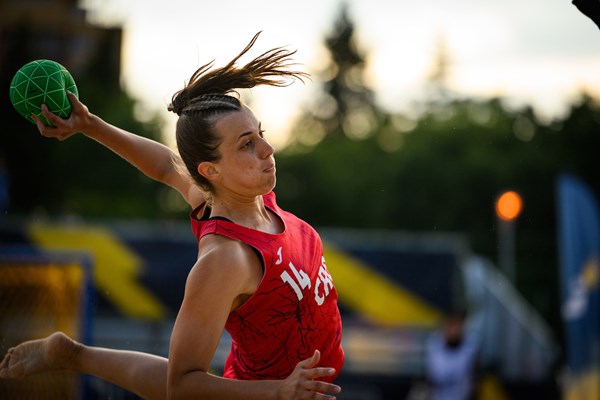 And the winners are... Czech Republic!

The Men's 20 EHF Championship 2022 title goes to the Czech team, that did the damage to opponents Austria in the first half (16:9) of their final in Varna. Austria did well in the second half, even reduced the gap, but could not threaten the Czech victory.

Pavel Bajer with 10 goals was the best scorer for the champions; Mario Lippitsch netted eight times for Austria.

They beat Austria in the final of the Men's 20 EHF Championship in #Varna 💥
🥇 CZE 🇨🇿
🥈 AUT 🇦🇹
🥉 NED 🇳🇱 pic.twitter.com/d4I1INZ4DY

The bronze medal match at the Men's EHF Beach Handball Championships 2022 has been a close affair with the better end for... Ukraine! They beat Türkiye 2:1 after losing the first set 17:14 and winning the second 22:20 - and ultimately the shootout 5:2.

The women's bronze medal match between Croatia and France is currently running (live on EHFTV) before we are going to see the two finals. 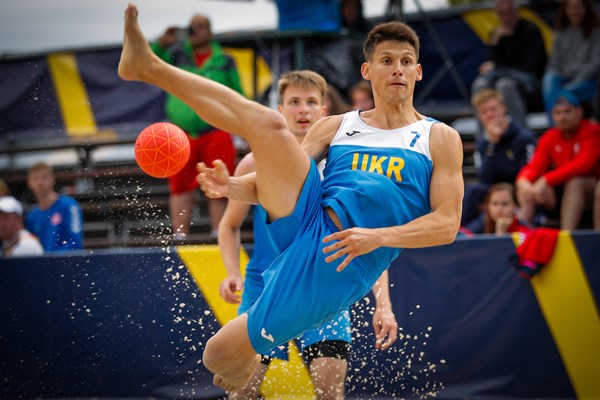 The nine best ranked women’s teams and the best 10 men’s teams at the event in Prague have earned their tickets for Portugal 2023 - alongside the European teams which played at the recent 2022 IHF Beach Handball World Championships in Greece.

And while the gold medals in Prague are yet to be decided, we can reveal which teams have made the cut:

The teams playing in Prague this week but unfortunately missing a berth at Portugal 2023 are: Switzerland and Czech Republic in both the men's and the women's event. 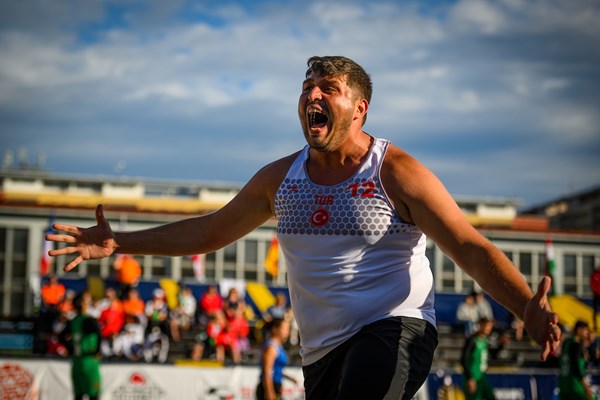 Half-time in Varna, and Czech Republic look like having one hand on the M20 EHF Championship trophy! They lead Austria 16:9 in the final. Pavel Bajer with five goals the best scorer so far.

You can watch the match live on EHFTV and follow it in the dedicated liveticker. 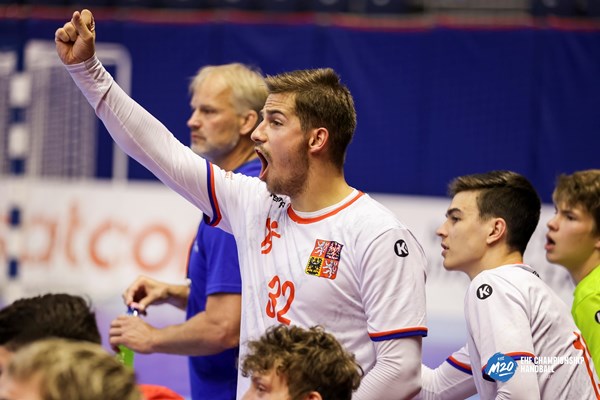 After a rest day in Portugal, the Men's 20 EHF EURO 2022 is in full swing again, as the preliminary round comes to a close. Two groups have been completed now; here are the results and the two teams which advance to the main round:

Despite their misstep against Faroe Islands on the opening day, Denmark win the group and advance alongside second-place Hungary. 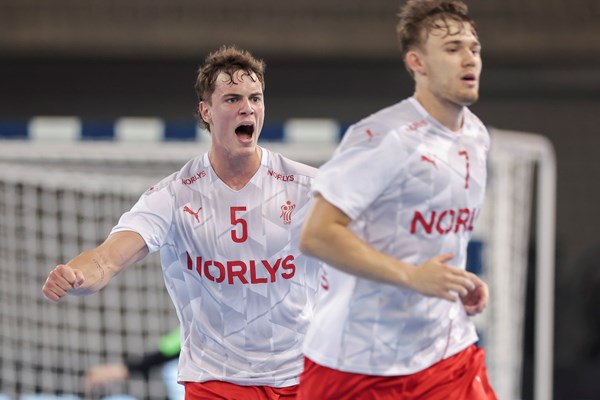 Sweden record a perfect three wins from three games to top the group, while France overtake Croatia into second place to grab the other main round spot.

And what more is coming up?

Tonight are the men's and women's finals at the EHF Beach Handball Championship... and both matches feature Hungary again. Germany are the opponents in the men's final at 18:45 CEST, Poland in the women's at 19:30.

(I think you have bookmarked EHFTV by now...)

2⃣✖ CONGRATULATIONS TO HUNGARY 🇭🇺 🏆🏆@MKSZhandball beat @RFEBalonmano in both the women's and the men's final at the YAC16 Beach Handball EURO 2022 in #Prague 💥#beachhandball pic.twitter.com/FSgbhUEeGk

Bronze for Netherlands in Varna!

The final, a neighbours' duel between Czech Republic and Austria, starts in less than an hour, also live on EHFTV. 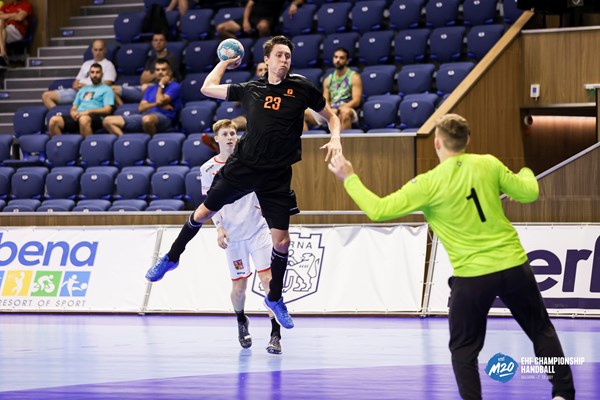 It is Hungary again!

Make that two gold medals from two finals: Just shortly after the Hungarian men have taken the title at the YAC16 Beach Handball EURO, the women's team repeat that achievement, also by beating Spain 2:0... 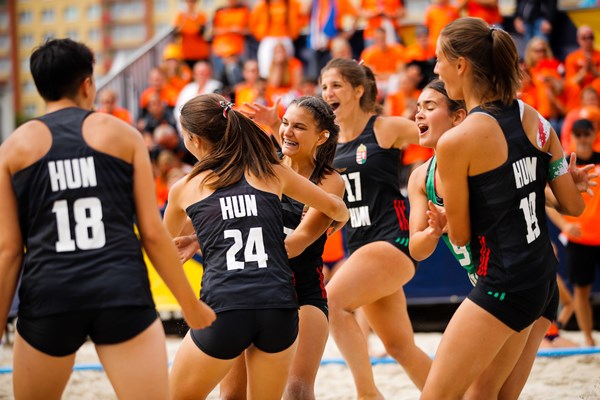 Meanwhile, don't forget the M20 EHF Championship is also in its decisive moments. You can still catch the closing stages of the bronze medal game between Netherlands and Finland live on EHFTV.

The final between Czech Republic and Austria follows at 17:00 CEST. 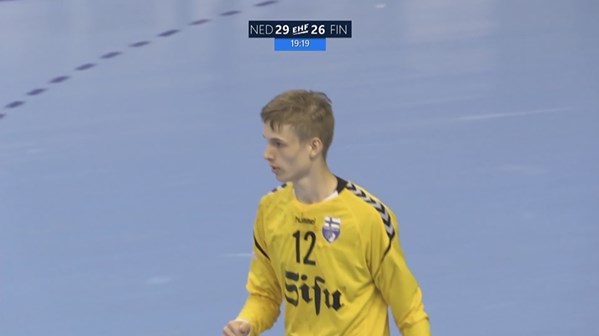 The bronze medal in the Women's 16 Beach Handball EURO travels to... Netherlands! The Dutch side downed Ukraine 2:0 in Prague earlier today, after losing the semi-final 2:0 to Hungary. At the same time, Ukraine lost a very close match to Spain in a shootout, 2:1. 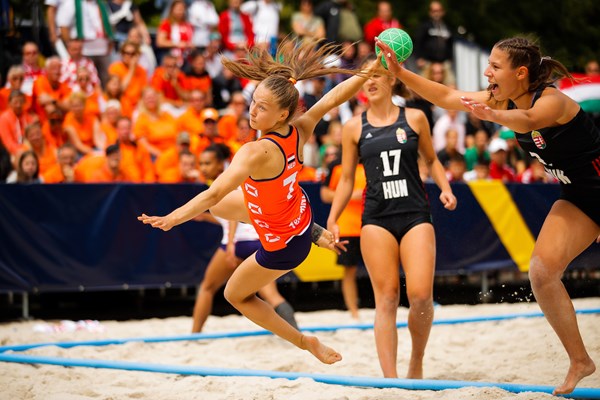 Earlier, Germany earned the bronze medal in the Men's 16 Beach Handball EURO, defeating Croatia 2:1. Germany had started the day by losing the semi-final to eventual champions Hungary (2:0), while Croatia had lost by the same result to Spain. 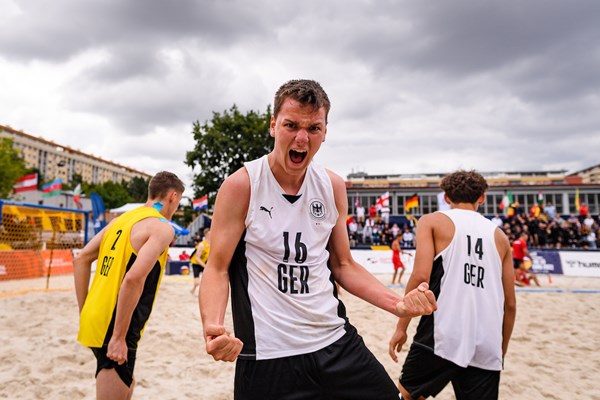 ... and remarkably, we are about to witness the identical final in the women's competition, where Spain and Hungary have just thrown off for their final.

Don't miss it on EHFTV! 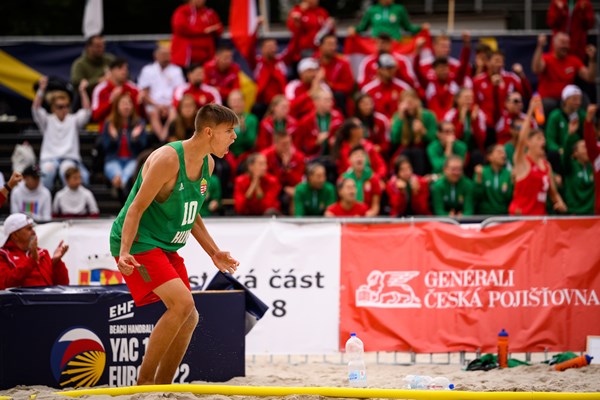 Welcome back to the Summer Blog for this bumper handball Sunday. Best to start with showing you one of the best actions on any court so far today: watch this incredible goal-from-his-own-half-to-beat-the-buzzer by Sweden's Albert Mansson in the Men's 20 EHF EURO 2022 match against Croatia:

With the action on the sandy courts in Prague about to start, here is a heads-up for later today... 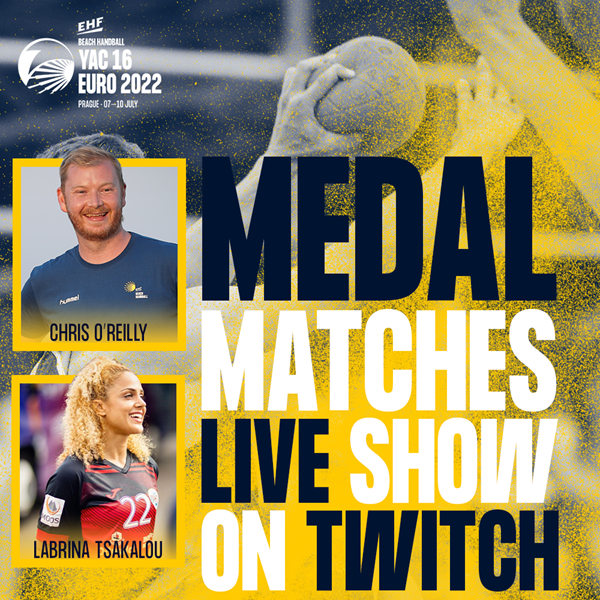 ... because we will go live on our Home of Handball Twitch channel this afternoon for the medal matches at the YAC 16 EHF EURO 2022! Renowned EHFTV commentator Chris O'Reilly and professional player Labrina Tsàkalou will host a live show full of fun and facts on the closing day of the beach events in Prague.

You don't want to miss that!

Good morning! The Summer Blog is here again – and I think you might want some guidance on this Super Sunday. What a day of handball is ahead of us, with six events in three different countries running at same time and five of these events heading into their medal matches.

It is just too much to get it all in one overview here, but I have tried to pack the main matches coming your way live on EHFTV in this schedule: 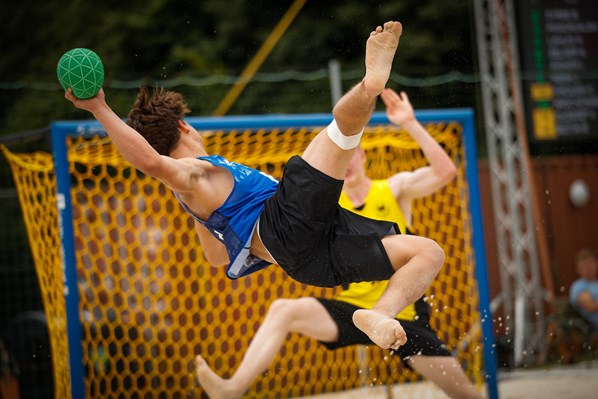 Next Article Germany and Hungary grab gold in Prague