The Summer Blog on eurohandball.com guides you through all the action at the various Younger Age Category (YAC) and beach handball events taking place this summer.

The day's Summer Blog coverage is coming to an end, but the action is far from over.

Still to come today, we have:

Watch all matches live on EHFTV and be sure to join us tomorrow for another big day of handball action across Europe!

We leave you with this superb play for Germany at the M20 EHF EURO — a promise of plenty more excitement to come!

What a play from 🇩🇪 Germany here in their M20 EHF EURO 2022 opener vs Italy — a superb save followed by a highly efficient goal from Tim Freihöfer 💪🏻 pic.twitter.com/U4fLidwXOP

The first day of action at the Men's and Women's 16 Beach Handball EURO is almost wrapped up, with 23 games played today and the last — Portugal vs Czech Republic — underway right now.

In the women's competition, Hungary, Spain and The Netherlands have all finished the day with a perfect record of two wins in two games and each lead their group tables.

With the men's competition still running, the results are yet to be updated fully, but will be available here.

Earlier in the day we mentioned some crunch matches approaching at the Women's 16 European Open in Gothenburg.

As this competition does not have any knockout phase, the winners of the two main round groups proceed directly to the final. Spain were already confirmed as finalists based on finishing first in group II, while their opponents were to be determined based on today's results in group I.

Romania, The Netherlands and France were all in the running for the places in the finals — both the trophy match and the 3/4 placement game — and now we know that it will be Romania taking on Spain in the final, while France will meet Norway in the 3/4 game.

In the pivotal games to decide the fate of the finalists today, Romania clinched first in group I with a 25:21 victory over Sweden. France beat The Netherlands 24:18 to leapfrog the Dutch into second position on the table and with that the chance to play for a medal.

From the sky to the sand...a peak at the EHF Beach Handball Championships from a different perspective. 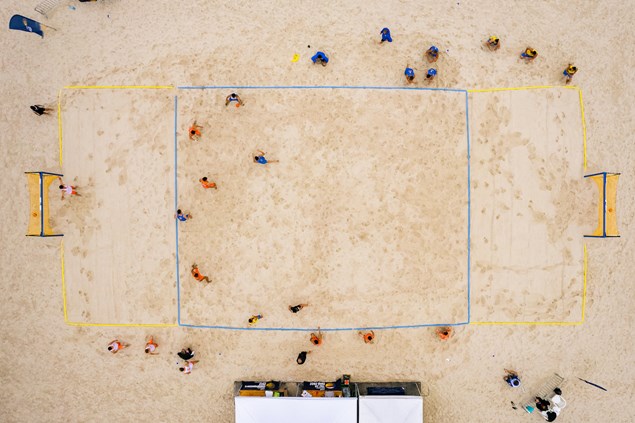 The action continues...everywhere! Let's check in on the indoor and sandy courts around Europe.

At the M20 EHF EURO 2022 in Portugal, Germany vs Italy and Slovenia vs Hungary are currently underway, with Germany in front of Italy 8:6 while Hungary have the upper hand against Slovenia 7:5 as both matches edge towards the end of the opening halves.

At the M20 EHF Championship in Bulgaria, Austria have just won a critical encounter against The Netherlands 28:27 to clinch top of group B. Next up, Finland play hosts Bulgaria at 16:00 CEST.

At the Men's EHF Beach Handball Championship, the first matches have concluded:

At the Women's EHF Beach Handball Championship, the first games are underway, with Ukraine vs Czech Republic and France vs Italy now live.

The first results are in from the M20 EHF EURO in Portugal — and we already have an upset, with Faroe Islands overthrowing Denmark 33:32 in a thrilling high-scoring match.

Another Scandinavian side, Sweden, have collected their first victory with a 31:19 result against Montenegro.

The Denmark vs Faroe Islands match saw quite the shoot-off between two players, with Elias Ellefsen netting nine for Faroe Islands and Thomas Sommer Arnoldsen scoring 12 for Denmark.

Next up, as the opening day in Portugal continues, Germany meet Italy for a group D clash while Slovenia play Hungary in group B. Both games throw off at 15:30 CEST.

While the M20 EHF EURO has just begun with the first matches being played right now (watch on EHFTV), the M20 EHF Championship 1 reaches the end of the preliminary round today.

Featuring two preliminary round groups and a total of nine teams — four in group A and five in group B — the competition's next stage is the semi-finals, with the top two teams in each group ready to contest the penultimate round in Bulgaria.

Group B is already sorted, with Austria and The Netherlands on top with six points apiece after three straight wins. The two will meet today to determine first in the group. In group A, it's a closer race, with Czech Republic entering the final preliminary round day on top with four points.

The semi-finals and 5–8 cross-matches will be played on Saturday. 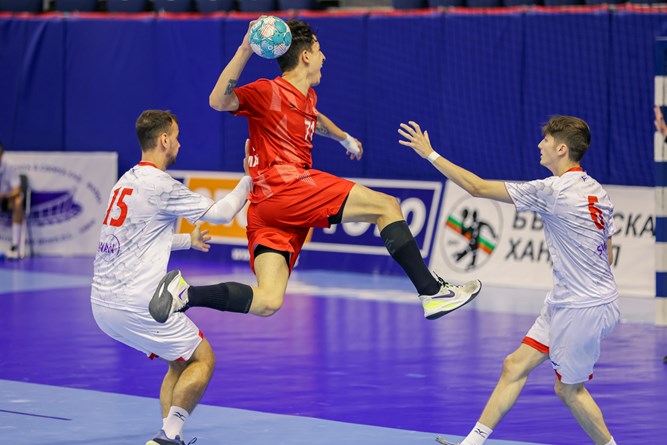 It is one o'clock... time to start the show in Portugal! The Men's 20 EHF EURO 2022 gets officially underway at this very moment.

Denmark and Faroe Islands in group B as well as Sweden and Montenegro in group C have the honour to play the opening matches of this highly anticipated European Championship.

Again, tune in to EHFTV (geo-restrictions may apply) to watch the games live. And read our preview to learn all you need to know about the M20 EHF EURO. 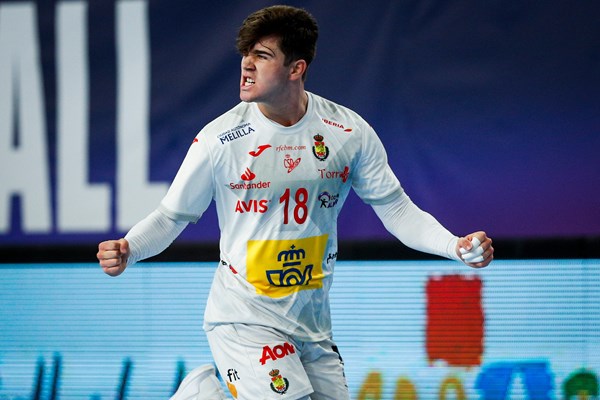 Leaving the beach shortly, we take a quick look at the Women's 16 European Open in Gothenburg, where it is decision time in the main round.

As there is no knockout phase, the winners of the two main round groups go directly to the final... and we have one finalist already confirmed this morning: Spain! They have won all their matches at the tournament in Sweden so far, and are clear winners of main round group II ahead of Norway.

Spain's opponents in the final, and Norway's in the bronze medal match, are to be decided by the last matches in main round group I this afternoon. Three teams are still in the race for the final: Romania, Netherlands (currently both in seven points) and France (six).

This is their schedule:

Wow, it doesn't get much closer than this! You can witness the conclusion as the matches can be watched live on EHFTV.

Some are having a flying start into the beach handball events in Prague this morning: 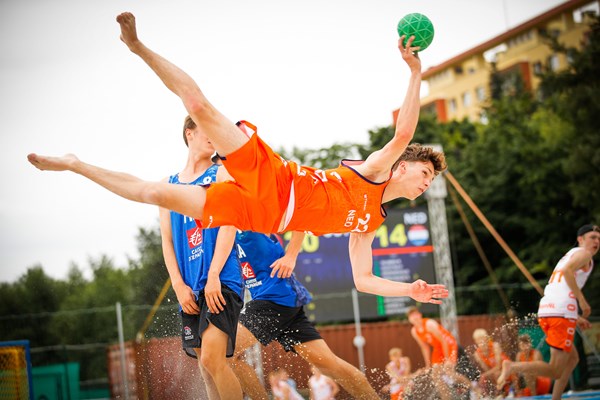 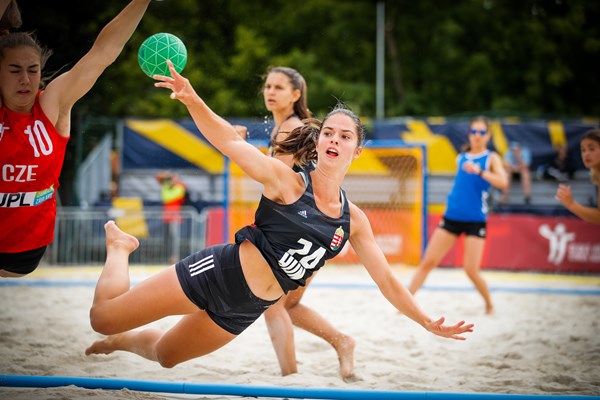 Those championships are the official senior qualification tournaments for the EHF Beach Handball EURO 2023: 9 women’s teams and 10 men’s teams at the event in Prague will earn their tickets for next year’s European Championships in Portugal – 23-28 May 2023 in Nazaré.

So, who is playing against who? Here are the groups for both events: 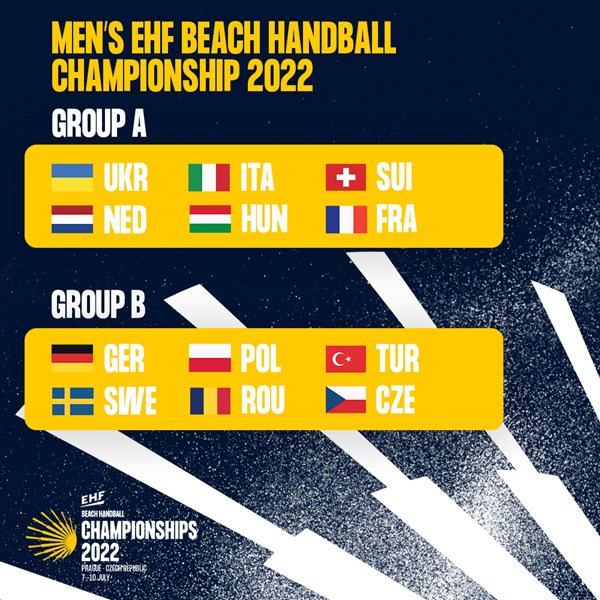 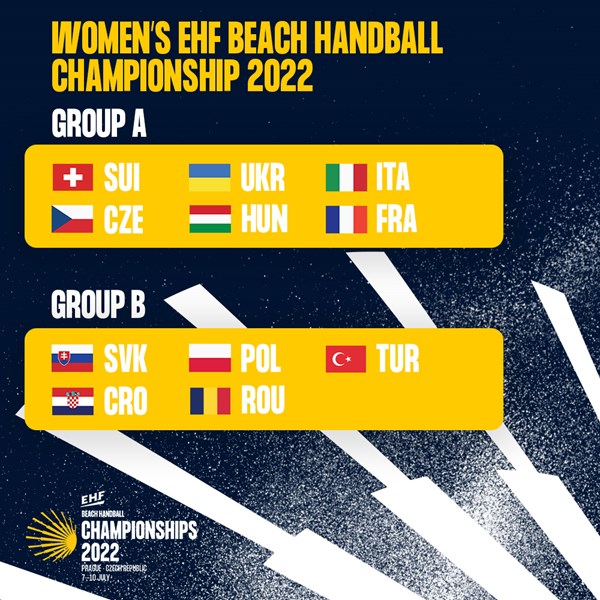 A total of 29 teams are in the mix at the YAC 16 Beach Handball EURO 2022 – 14 in the men's competition and 15 in the women's competition. Both events have started the preliminary round with three groups.

The group phase ends Saturday morning, before the knockout phase begins with the quarter-finals on Saturday afternoon. The semi-finals and medal matches are on Sunday.

This is how the preliminary groups in both competitions look like: 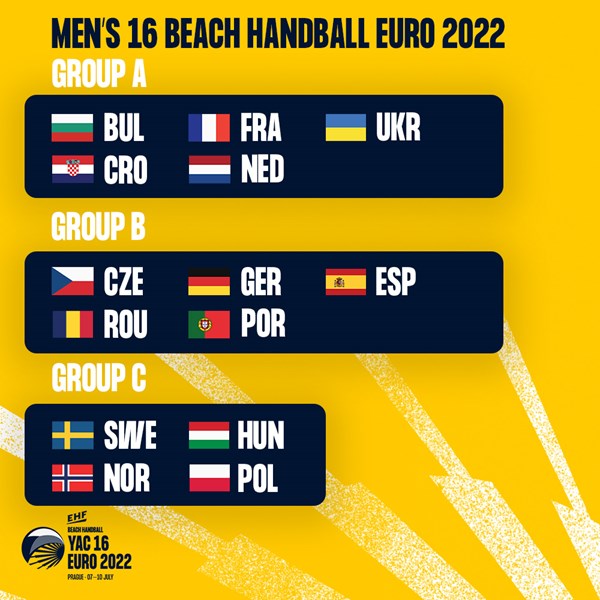 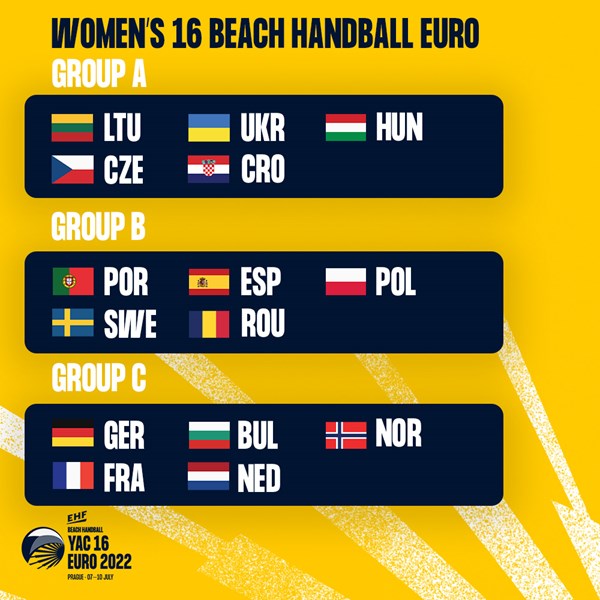 It is summer time, so let's go to the beach first.

From today until Sunday, Prague is hosting the EHF Beach Handball Championship as well as the YAC 16 Beach Handball EURO – both with a women's and a men's competition – and opening-day play on the sandy courts in the Czech capital is already in full flow...

Tune in to EHFTV to catch all the action live.

Find out which teams are playing and what is at stake on this extensive preview:

Reading this Summer Blog is one thing, actually watching all the matches is another. And guess what? You can do both!

EHF's own livestreaming platform EHFTV is your place to go if you want to see your favourite teams in action, whether they are playing on the sandy courts in Prague or at one of the arenas in Portugal, Bulgaria, or Sweden.

Hold your breath: in total, EHFTV will feature 299 matches from eight tournaments this summer as the EHF puts the next generation under the spotlight with its increased YAC coverage. 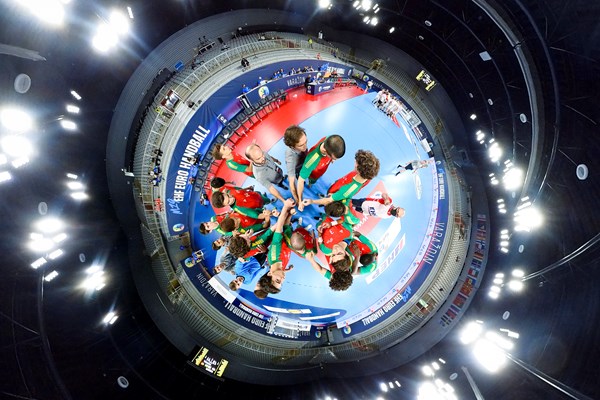 Welcome to the first edition of our daily “Summer Blog” here on eurohandball.com!

I am sure you are familiar with the live blog format from our coverage of the big European club competitions and European Championships over the last two years.

This time, the EHF has thought it might not be a bad idea to keep you also up to date on what is happening at its various YAC (Younger Age Category) and beach handball tournaments currently taking place, or about to start, across Europe.

So here we are, throwing off our summer of sun, fun, and handball! 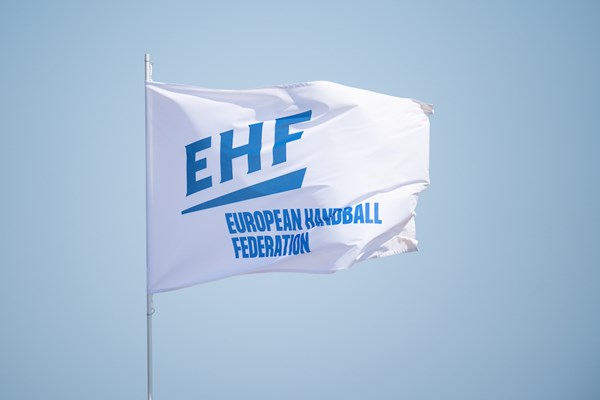