A ball, a beach, two goalposts and a court. What more would you need to start playing beach handball? This is what Christine Mansour thought when she took up the sport and has never looked back behind since that moment. She has become one of the staples of the United States women’s beach handball national team and has big plans for the future. And now she takes on a new role of the "face" of beach handball.

“For me, I started in indoor, I have seen it played in the Olympic Games and I immediately fell in love, as soon as I saw the sport, I thought, oh well, I could play that.”

“But then I really stumbled upon beach handball when the USA Federation posted something about a beach handball tryout on Facebook and I knew immediately that this was the sport for me, it felt so natural and so right. Being on the sand and playing on the most beautiful beaches in the world is just magical,” says Mansour.

While indoor handball carries a bigger risk of injuries and has been traditionally been more professional, with bigger pressure on the players, beach handball is still an emerging sport, but one which is making bigger and bigger steps towards soaring in popularity.

According to Mansour, there is nothing to dislike about it, as she brands beach handball as a “big happy family”, where everybody knows each other, lends a helping hand whenever needed and strives to make the sport more exciting.

“The fair play aspect also attracted me, we are like one big family, meeting each other after the games, which are very competitive. You have to be passionate and dedicated, we play for the love of the game, I love this. On the beach, you can freely express yourself and be the athlete you want to be. The sand plays huge energy in the vibe of the sport,” adds Mansour.

Her energy is infectious and just hearing her speak so passionately about the sport she loves just makes it so natural and so exciting to watch. Therefore, the EHF has teamed up with Mansour, which will make her debut at the EHF Beach Handball Champions Cup 2022 as the brand new “Face of Beach handball”.

“When the EHF approached me about this role, I was very excited and extremely honoured, this sport takes a special type of energy, and everybody involved understands that. This sport, to me, is so much more than beach handball, it is the community and having the honour to represent that is huge, something that I do not take lightly.” 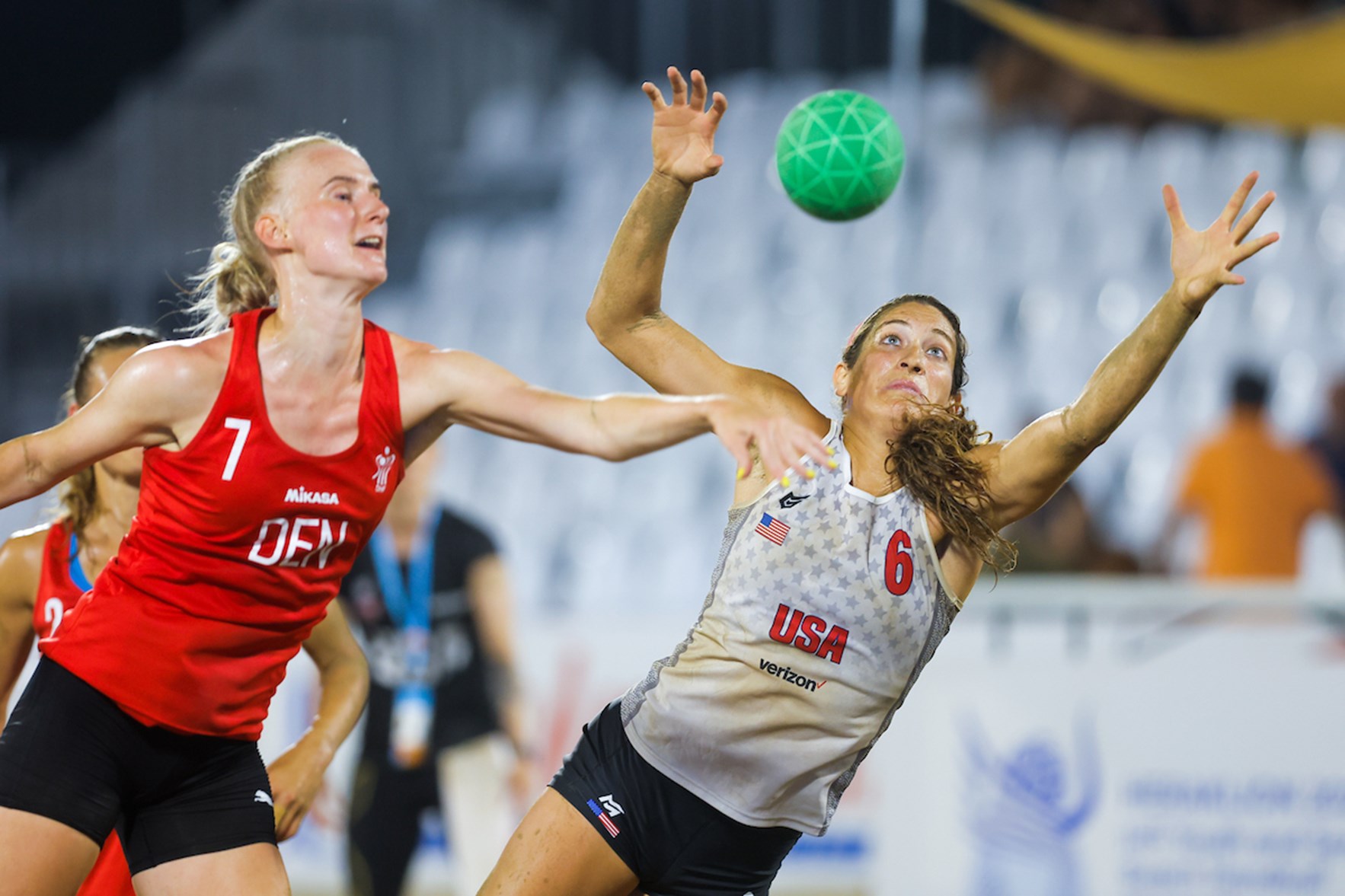 “For this sport to progress, it is going to require more people to put in the time to grow. For me to be in a position to facilitate the growth of the sport is just exciting and just the way I want it to be. In terms of adding pressure, I do not see it that way, it just gets more meaning to be an athlete, showcasing to the world this huge honour, I am looking forward to wearing that hat,” says Mansour.

She has also been the driving force in the “Dual Nation Mission”, founding a team that brings together two nations united in athletics. According to Mansour, this team is more than just sport, it is a complete cultural experience on every level. Its mission is to lead by example through cultivating the competitive spirit needed to perform at the highest level, but also with an energy that is undeniably positive.

Players from the United States of America and the Netherlands will join up in order to grow the sport in both regions and globally, ensuring that the spirit of beach handball is preserved.

“Our team is based in Los Angeles and whenever we have a training camp, people come to us and ask us what this sport is because it is just so aesthetically pleasing and so interesting to watch, I think it is going to take off, clubs are popping up in the United States,” says Mansour.

She adds that with her experience as an indoor player in the Netherlands, she learnt the hard way how difficult is for players to make their breakthrough in the sport, with the USA featuring in the Beach Handball World Championship in 2018 and 2022, finishing 14th in both editions.

Her first tournament as the “Face of beach handball” will be the EHF Beach Handball Champions Cup 2022, due to take place in Porto Santo, Madeira, a dream island in Portugal.

On paper, the “Dual Nation Mission” cannot go wrong, with plenty of passion and desire to bring out what’s best in beach handball – the fair-play aspect, the team spirit, the highlight reels and some down-to-earth players.

But Mansour wants more – her infectious passion wants to transform beach handball from a niche sport into a mainstream one, especially with some games ready to be on the fringes of the Paris 2024 Olympic Games.

In 2028, the Olympics will be organised by the United States, in Los Angeles, exactly the base of the USA team. And if by that time some players can grow and establish themselves as one of the best in the world due to the “Dual Nation Mission”, then it will be mission accomplished.

Previous Article A game of averages: How the teams shape up for the EHF EURO 2022

Next Article Slovenia aim to take advantage of their home court

FACTS & FIGURES: On the eve of 2023, we take a look at the EHF beach handball year that was