Jaganjac leaving Nexe on a high

EHF European League Men 2021/22 top scorer Halil Jaganjac is counting down the days until his farewell from RK Nexe. This summer, the 23-year-old Croatian left back is joining Rhein-Neckar Löwen – but he has a lot left to look forward to before his departure, most notably the EHF Finals Men 2022 in Lisbon this weekend.

Nexe have become the first team from Croatia to qualify for the final tournament of an EHF club competition, and they are enjoying it: from the match in the first qualification round to the semi-final against defending champions SC Magdeburg on Saturday (live on EHFTV at 16:00 CEST), it has been a thrilling season for them.

“This season is amazing for us. Being part of the EHF Finals and playing the semi-final is a historic success for the club,” Jaganjac said.

“It has been an amazing journey for all of us. This season was very hard. We started early in the competition and almost didn’t qualify for the group phase: we defeated Bjerringbro-Silkeborg on the away goal rule. And now, we are at the final tournament.”

Nexe had been close in the past, playing quarter-finals, but always missing that final step. Under new coach Branko Tamse that has changed this season, with the whole team breathing as one, having the strong will to improve the club even more, and players having full trust from the coaching staff.

The results are visible.

“When I came to Nexe four years ago, I sat down and talked with president Ergovic. We both had a wish for me to progress and improve as a player and they gave me their full trust,” Jaganjac recalled.

“Nexe gave me a lot for my career, and I couldn’t ask for a better environment for a young player to develop. I received more than I expected, and I am very grateful for that.”

The EHF Finals in Lisbon will mark his farewell from the club.

“Joining Löwen and one of the best leagues in the world is a logical step in my career,” he said.

Competing in the Bundesliga next season means he will get to play against Magdeburg several more times.

The German powerhouse are Nexe's semi-final opponents on Saturday, and both teams also met in the group phase earlier this season, when Magdeburg won 32:26 at home in December and 28:24 in Nasice in March.

Having won both encounters, Magdeburg are clear favourites in Altice Arena on Saturday.

“Magdeburg have defeated us two times already. It is not a big surprise, because if you ask me, they are one of the top three teams in the world right now. Their performance this season across all competitions shows that,” Jaganjac said.

Magdeburg haven’t lost a match in Europe’s second-tier competition this season, only drawing two times. The German side’s strong defence and powerful attack will prove a real challenge for Nexe.

“I think we have the small advantage of not being the favourites in this match. We can play without any pressure,” Jaganjac said.

“Magdeburg are strong on all positions. We have to over-perform and push our limits if we want to surprise them in Lisbon,” he added.

“The EHF Finals is a reward for our hard work in Nexe, for this amazing season. We just want to enjoy playing handball, no matter the outcome.”

I think we have the small advantage of not being the favourites in this match. We can play without any pressure. Magdeburg are strong on all positions. We have to over-perform and push our limits if we want to surprise them in Lisbon.
Halil Jaganjac
RK Nexe left back

Apart from winning the EHF European League trophy with Nexe, Jaganjac is also in the hunt for the top scorer title. His tally stands at 97 goals; only SL Benfica’s Petar Djordjic with 90 goals could overtake him. Hosts Benfica take on Orlen Wisla Plock in the second semi-final Saturday.

Since his career path started in Matulji and Kozala, Jaganjac went through all selections of the Croatian national team. So far, he is living up the expectations – even more so if he could bag that top scorer title.

“Everything has been going my way this season. I have avoided injuries and enjoy playing in Nasice. I have full trust from coach Tamse, club and teammates. Those are the reasons I managed to score 97 goals so far. This is my last year at the club and I must say it was one of the best things in my life so far,” Jaganjac said.

Even before this weekend’s EHF Finals, Jaganjac faces another highlight as Nexe are playing the second leg in the play-offs for the Croatian league title against HC PPD Zagreb on Wednesday, after losing the first leg in Zagreb 31:26 last Saturday.

“Zagreb are strong rivals and the title is at stake. It is not easy to come to Lisbon after tough matches like that. It is s a tight schedule but that shouldn’t be any excuse as Magdeburg don’t have it any easier.”

You still have time to book your tickets to see Halil Jaganjac and RK Nexe – as well as SC Magdeburg, Orlen Wisla Plock, and SL Benfica – live in action at Altice Arena in Lisbon this weekend! Order your EHF Finals Men 2022 tickets here. 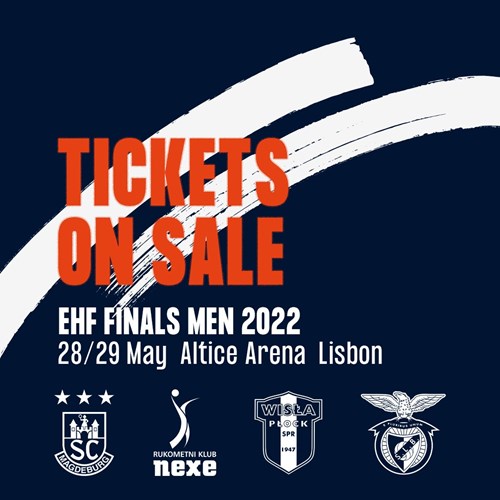 Next Article EHF Convention was “perfect to exchange ideas and knowledge”

SEMI-FINAL REVIEW: The titleholders from Germany have to fight hard against Nexe but end the first semi-final with a clear 34:29 win

FEATURE: One day prior to the semi-finals, players and coaches got to know the venue for the EHF Finals Men

SUMMARY: Coverage of the EHF Finals Men 2022 in Lisbon, where the European League title was decided on 28/29 May

FINAL PREVIEW: The hosts count on another boost from their home fans, while the defending champions rely on experience

FEATURE: Venue in Lisbon has played host to number of big events in the past, including 2003 World Championship final

Quotes from the EHF Finals Men 2022

NEWS: Fans can keep up with all the action on TV and social media as the EHF European League Men 2021/22 title is decided