Throughout the course of the EHF Champions League season, data analyst Julian Rux provides the handball community with deep insights into the numbers behind the game, analysing what the data says about teams' performances.

For four-time Machineseeker EHF Champions League winner THW Kiel, the season has been mixed so far. With six points, last year’s EHF FINAL4 participants sit only in fifth place in their group. 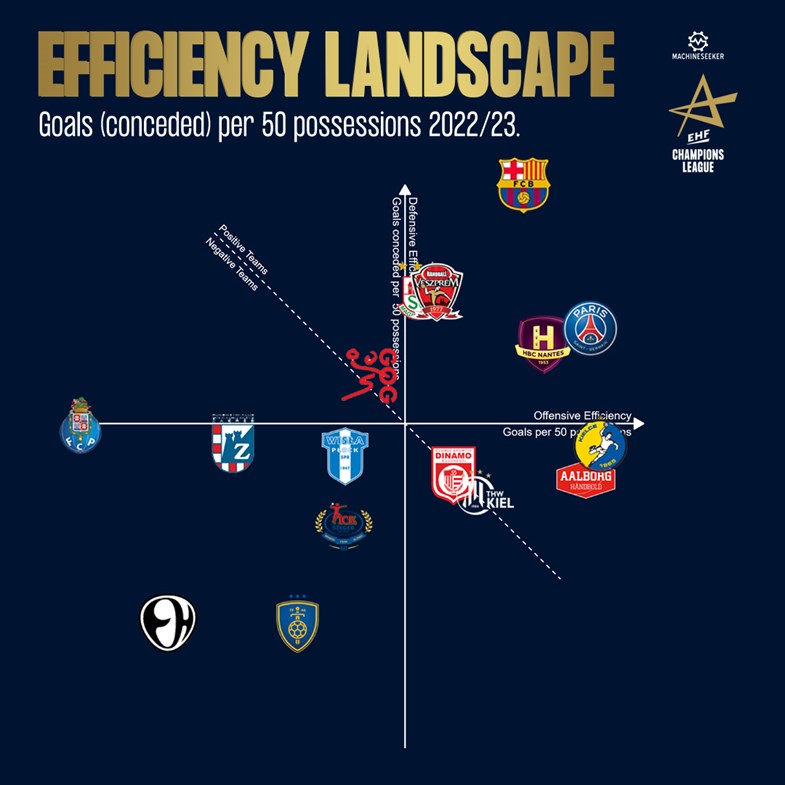 Kiel’s advantages through seven versus six

What is particularly interesting about their attack is that they regularly rely on the seven against six in the positional attack. Even in situations where most other teams would not do it, for example in the middle of the game when they are leading, coach Filip Jicha regularly replaces his goalkeeper with an additional court player.

Since they use it regularly and obviously also train it regularly, the players are used to it, which bears fruit in decisive situations, as was the case against Barça last Thursday. The Catalan club led the whole game until Filip Jicha took the goalkeeper off at the end and played with seven court players. They turned the game around from 25:28 in the 54th minute to 30:28 in the 59th minute. The defending champions were lucky to draw the game in the end.

Almost exactly one-third of the positional attack possessions of the German side when both teams have no penalty minutes are with an additional field player instead of the goalkeeper. Data from other EHF Champions League teams on this is not available, but it might be the highest rate amongst all teams.

In an interview with Kieler Nachrichten, coach Jicha explained that while the tactic might not be popular it helps to relieve the players in attack because due to the numerical advantage there are less exhausting one-on-one situations. That is especially important because of their many injury problems including superstars Sander Sagosen and Hendrik Pekeler who both just returned to action.

In addition, Jicha stated that it’s simply their most successful tactical tool in the positional attack. Data from this season supports that, but the difference this season is not as big as it might have been expected. In normal six-against-six positional attacks, Kiel have scored 87 goals in 149 possessions. In seven versus six, they scored 44 goals in 74 possessions. Thus, each adjusted to 50 possessions, they scored 29.2 goals in six versus six and 29.7 in seven versus six. 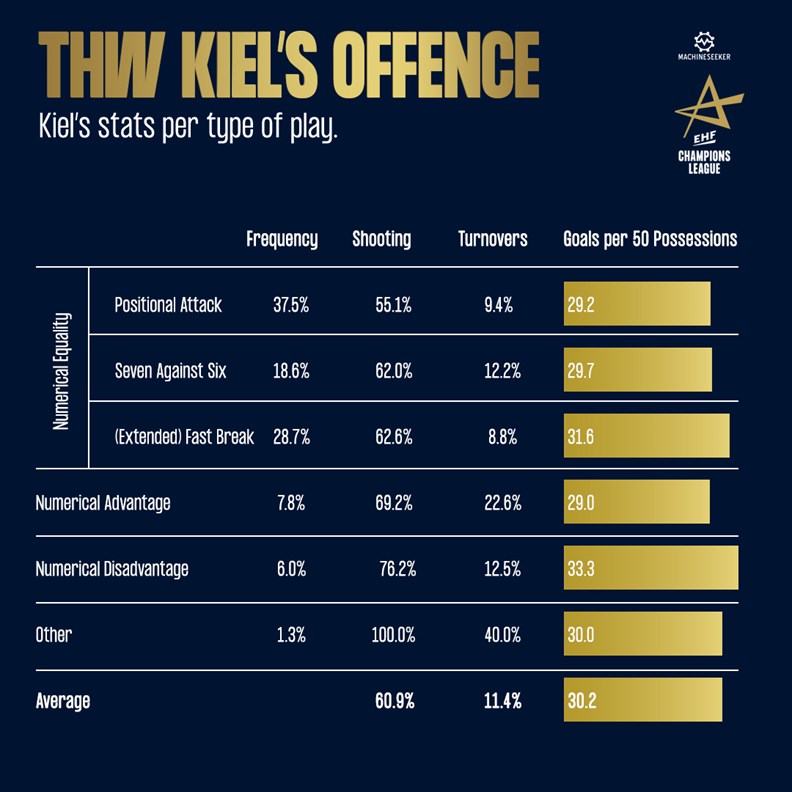 With the additional field player, the zebras are creating better scoring opportunities. Their shooting percentage of 62.0% in comparison 60.7% overall and 55.1% in positional attacks when both teams have the same number of players on the field confirms this. One reason for this is that they take slightly more penalties when playing seven against six (8.1% of the possessions) than when playing in numerical equality (6.0%).

Turnovers are overall a big strength for Kiel. Only 11.4% of their possessions ended with a turnover. Only Lomza Industria Kielce are slightly better with 11.3%.

In seven versus six numerical advantage, however, 12.2% of their possessions ended with a lost ball. Overall, that still would be the third lowest number of turnovers, but, in comparison, in six versus six positional attack possessions they turned the ball over only in 9.4%.

The problem here is, of course, that in seven versus six this often leads to easy goals as there is no goalkeeper on the field. Therefore, THW also leads the table in most empty net goals conceded. In seven games their opponents scored ten times into the empty net. Elverum Handball is the only other team with more empty net goals conceded than games played with eight. But this is actually not such a big problem, because on first-wave counterattacks with a goalkeeper in goal, the scoring rate is very high as well.

A much bigger problem for the German record champions is that while their seven versus six numerical advantage works, they are not efficient in “normal” numerical advantage when a player of the opposing team is suspended for two minutes. They were only able to score 29.0 goals per 50 possessions then.

Interestingly, in turn, they are clearly better in situations with numerical disadvantages, where they replace the goalkeeper with an additional field player. Here they score 33.3 goals per 50 possessions, including shooting 76.2% and getting to the penalty line in 16.7% of the possessions.

So, in the current season, seven against six is not yet that outstanding, but problems are clear in other aspects of the attack and especially on the defensive end. There the empty net goals conceded after seven against six are not helpful, of course, but in the end, they are not a big factor.

However, the return of Sagosen and Pekeler should be a big factor. Both are important factors in the seven-on-six and especially Pekeler should raise the defense to a higher level again. With that, Kiel could end up in the TruckScout24 EHF FINAL4 once again.

Next Article Montpellier make it four out of four in Veszprem