After a battered season, full of unpredictable difficulties, FTC-Rail Cargo Hungaria managed to win the Hungarian domestic championship with a spectacular game and confident victory against Győr.

Despite the domestic success, there was European disappointment again as they could not proceed from the play-offs of the DELO EHF Champions League.

Summer preparation is also altered by the Tokyo Olympic Games as eight key players of the club and head coach Gábor Elek have been on national team duty, diverting their attention from the coming season until now.

Most important question: Can changes help FTC to advance?

FTC had a season full of ups and downs because of the coronavirus pandemic that saw Elek’s team postponing many matches from autumn to spring leading to a very thick spring campaign. Although last year was the sixth consecutive time of the Hungarian powerhouse in the EHF CL competition, they are still waiting to make a serious breakthrough on the European stage.

“We closed a wavy year, the early elimination in the Champions League was a big disappointment, but the Hungarian championship title compensated many things. I am very confident that we are facing a more predictable season in which we want to return to the top eight teams in Europe,” underlined Zsolt Görög, the executive director of FTC’s handball department.

The DELO EHF Champions League has an outstanding importance in the life of the club, Zsolt Görög also highlighted there is always more interest for these series among sponsors and spectators, moreover, the players and their fans are all dreaming about the team finally breaking their curse.

”Our team dreams of the DELO EHF FINAL4, and for this season it is my biggest motivation also,” states Zita Szucsánszki leaving no questions about how current Hungarian champions are preparing for the 2021/22 campaign.

“I know, there are more teams aiming for the same but I do trust in our team, I am confident if we can show our best, then we will finally reach our goals.”

The co-team captain Zita Szucsánszki cannot wait to hopefully have a normal season again with the spectators being allowed at the sport halls, going with full-house, as the team will need extra help from the grandstands for example against CSM Bucuresti, against whom they “always play a special game.”

Under the spotlight: Gréta Márton

Gréta Márton, who is only 21 years old, could step up as the number one left wing after the departure of Nadine Schatzl to Győr. The two Hungarian talents shared the position for four years, in the past two seasons having half of the responsibility relying on the shoulders of each.

Gréta Márton scored 28 goals in the past EHF CL season, continuing to show a consistent performance since she joined the adult team in 2015. 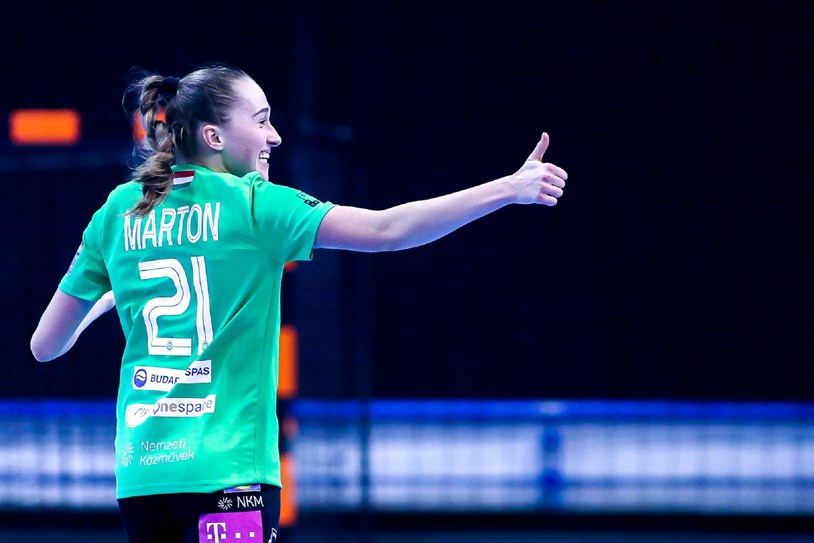 On one hand, the Hungarian party could face the 2021/22 season with positive expectations as last year’s newcomers are already built-in the team, while the departure of Schatzl and Háfra being hurtful for them, their replacement look promising.

Szandra Szöllősi-Zácsik will join the club again, as she was part of the team between 2006 and 2009, and between 2010 and 2017, making this return a major comeback.

Júlia Hársfalvi will try to step in the place of Schatzl Nadine. The 24-year-old Hungarian player is a former Győr and Siófok player, while she also spent one season on loan in Metzingen in 2018/19, making her to be an experienced player despite her age.

On the other hand, FTC is now left without their two most experienced centre backs, Anikó Kovacsics and Zita Szucsánszki, due to shoulder injury, which will make it really hard for Gábor Elek to find the right balance.

Júlia Hársfalvi, one of the newcomers already knows how it feels to step on top of the podium in the EHF CL as she was part of the title-winning team of Győr in 2017.

The young Hungarian talent played on loan in Germany, Metzingen, where she and Julia Behnke were teammates and developed a good relationship. Now, based on their social media activities, the German players and Hársfalvi spend a lot of their free time together between training as the summer training camp already started for FTC on 19 July.

FTC celebrated its 70th birthday last year, rejoicing it with the women’s club’s 13th title in the Hungarian championship.

The team will start this new decade again with four foreign players, three from Germany, Julia Behnke, Emily Bölk and Alicia Stolle, and one from the Netherlands, Angela Malestein. However, the team led by Gábor Elek now for 15 years lost two of their most experienced players during the Olympics, which will make it difficult to reach the DELO EHF FINAL4.

Previous Article Ten transfers that will make your handball summer

Brest lead in Elverum, Motor up against Flensburg at the bre…