Although FTC-Rail Cargo Hungaria failed to defend their Hungarian league title last season, finishing runners-up to rivals Györi Audi ETO KC, they did not end their 2021/22 campaign emptyhanded as they won the domestic cup.

However, in the EHF Champions League Women their hopes to qualify for the EHF FINAL4 in their hometown of Budapest were shattered once more, this time by Krim Mercator Ljubljana in the play-offs.

Most important question: What is the key for FTC to reach the EHF FINAL4?

FTC had a promising group phase in the 2021/22 season, but the green-white team missed the journey to the EHF FINAL4 once more.

“Last season’s knockout tie against Ljubljana was a big disappointment for us, because our main goal was to reach the quarter-finals and maybe even the EHF FINAL4,” says Zsolt Görög, executive director of FTC’s handball department.

“Our biggest goal is to reach the EHF FINAL4, and for that, every player and staff member has to work really hard and hope for the best outcome.”

The EHF Champions League Women is obviously an important factor to FTC – not just for the club, but also for the city, the fans, and the sponsors.

“Most of our new players have a lot of international experience and they have had a lot of successful EHF Champions League campaigns, so we hope that they can bring that extra motivation and winning mentality that will help us achieve our dream of playing in the EHF FINAL4,” says Zita Szucsánszki, team captain of FTC.

“I think our team has more depth than in the last couple of seasons, so I hope that we will have the same energy and momentum in the springtime matches that we usually have at the start of the season.”

Under the spotlight: Zsuzsanna Tomori

The experienced Hungarian left back returns to the club where she spent five seasons (2010-15) between two stints with league rivals Györ.

Her experience, defensive qualities, motivation, and voice in the locker room might now help FTC take the next step.

“I had been planning to come back here for a long time, so I did not think for a minute once I got the opportunity,” Tomori said after her transfer was announced.

“In our arena, in this environment, all the feelings that I used to have, come back. I really want to get to EHF FINAL4 with Ferencváros.” 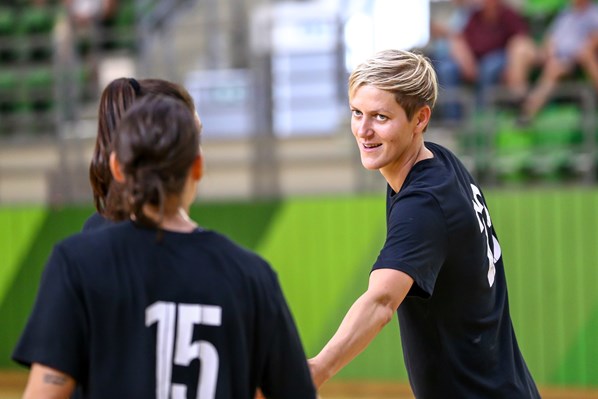 “This season our objectives will stay the same, and even though our group could be a bit tricky, we want to be one of the eight best clubs,” Görög says.

“I think there will be a lot of exciting and hard-fought matches in this group, which all handball fans will enjoy around the world. We will play against last year’s winners, Vipers Kristiansand, which I am really looking forward to. And also the game against CSM Bucuresti, because it is a special match every time with a great atmosphere. But to be honest, every home game is a special occasion for us, because of our amazing fans and their support for this club.”

MVM Dome, the state-of-the-art arena with 20,022 seats that hosted the Men’s EHF EURO 2022 final, was the brand new venue for the EHF FINAL4 2022 in June – and will again be the host arena for the 2023 edition in the heart of one of Budapest’s best known districts, Ferencváros.