The countdown to Cologne has truly started on Tuesday with the draw for the semi-finals at the EHF FINAL4 2022. The draw has paired defending champions Barça with THW Kiel, while Telekom Veszprém and Lomza Vive Kielce contest the other semi-final on Saturday 18 June.

Since the completion of the quarter-finals last week, the draw has been eagerly awaited by the clubs and fans alike. This draw result will only add to their excitement:

The semi-finals will not necessarily be played in the order they were drawn from the pot. The exact playing schedule for Saturday 18 June will be confirmed in due time.

The two losing teams will contest the 3/4 placement match at LANXESS arena on Sunday 19 June, followed by the two winning teams playing the big final for the most coveted trophy in men’s club handball. 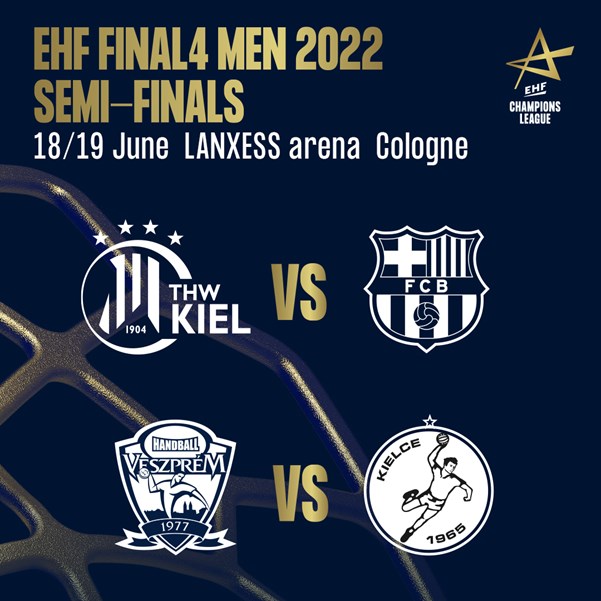 The draw at the EHF office in Vienna was conducted by EHF President Michael Wiederer and EHF Chief Sports Officer Markus Glaser in a ceremony moderated by Markus Floth.

“This is a big happening, this is what you train for the whole season”

Kiel are looking forward to another mouth-watering clash with Barça, in a repeat of the 2020 final when the German side last lifted the trophy – their fourth overall.

“This is a big happening, this is what you train for the whole season,” Kiel left back Sander Sagosen said. “It is such an amazing weekend. Hopefully we can bring back the trophy to Kiel but it is quite hard.”

While Barça have not demonstrated the same dominance like last season, when they racked up a record 20 wins from 20 matches, the Spanish titleholders are of course strong contenders to defend their trophy.

“We have been struggling during the first half of the season. Now we are in the best shape again, but I don’t think we are the favourites,” Barça goalkeeper Gonzalo Pérez de Vargas said.

If Barça were to win the trophy again, it would not only be their record-extending 10th title, but they would also become the first team to win the EHF FINAL4 two years in a row, since the format was first introduced in the 2009/10 season.

“That is our challenge,” Pérez de Vargas said with a smile.

In the other semi-final, Veszprém are targeting their fifth EHF Champions League final and, ultimately, their first title.

On the first day in Cologne, they have to lock horns with Kielce, who won the title in 2016... in a final against Veszprém.

“It is a tough EHF FINAL4, very even,” Veszprém centre back Rasmus Lauge said. “I can not name one favourite but we are confident that we can beat everyone.”

Veszprém beat both Kielce and Barça on home court in Hungary in the group phase earlier this season.

“The team that wins, has to be on the top, top, top level in both games,” Lauge said about the EHF FINAL4.

Veszprém are holding a clear advantage in the head-to-head comparison, beating Kielce 11 times in their previous 16 meetings, with one draw and four wins for the Polish side.

Kielce are enjoying an impressive season, winning their group ahead of Barça, Paris Saint-Germain Handball and Veszprém, before comfortably beating Montpellier HB in the quarter-finals.

What makes the Polish champions so strong ahead of their semi-final against Veszprém?

“No secrets, just hard work,” Kielce right back Alex Dujshebaev said. “All the team has been playing amazing this season, I hope we can keep it going at the EHF FINAL4.”

Following their excellent performances so far this season, Kielce believe this is the year they can add a second EHF Champions League trophy.

Alex Dujshebaev has done it before – with Vardar in 2017 – and his father and coach, Talant, even did it multiple times as player and coach in the past.

On Sunday 19 June, they might be holding the trophy for the first time together.

“That would be amazing,” Alex Dujshebaev said. “Also with my brother, Dani.”

Next Article Referees and delegates nominated for Budapest

Summary: Kielce and Barça to final after thrilling semis

EHF FINAL4 Men showcased like never before on Twitch

NEWS: A 54-hour live show direct from Cologne will offer plenty of fun, expert analysis and guests from every corner of the globe

SEMI-FINAL PREVIEW: Four teams left in the running for the 2021/22 title will become two, as Veszprém meet Kielce and Barça play Kiel

“Always great to be back”

FEATURE: All four teams have arrived safe and well at the EHF FINAL4 Men in sunny Cologne

NEWS: In their unique ways, four social media celebrities will share their impressions from Cologne on their own channels

NEWS: The draw for qualification phase 1 takes place in Vienna on 29 June