Record European champions Norway will start a quest for their ninth title at the Women's EHF EURO 2022 in the preliminary round group A together with Hungary, Croatia and Switzerland.

Thursday's draw at the Ljubljana castle in the capital of Slovenia determined all four preliminary round groups of the upcoming tournament which will take place 4-20 November in Slovenia, North Macedonia and Montenegro.

The reigning Olympic winners and the runners-up of the 2020 edition - France - were pitted against the Netherlands, Romania and the co-hosts North Macedonia in group C in Skopje, while the three-time title-holders, Denmark, who won the bronze medals at the last World Championships in 2021, will face their Nordic rivals from Sweden as well as Serbia and co-hosts Slovenia in group B in Celje.

In group D in Podgorica, Montenegro will play host to Poland, Germany and Spain. 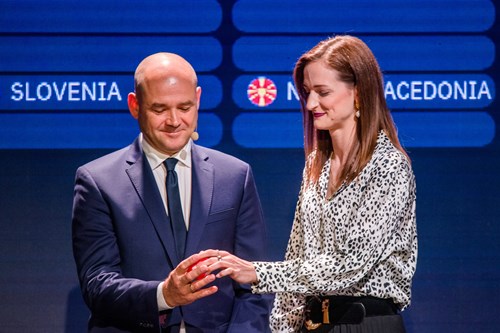 The opening day of the final tournament on 4 November will see the defending champions Norway take on Hungary and Croatia lock horns with Switzerland in Ljubljana, while Denmark will face Slovenia and Sweden will play against Serbia in Celje.

The top three teams from each preliminary round group will qualify for the main round, which will be hosted in Ljubljana and Skopje before the final weekend in the Stozice Arena, Ljubljana.

The Women's EHF EURO 2022 will be the last continental championship to be played with 16 teams before its expansion to 24 teams in 2024. Next Article Three tickets to Budapest up for grabs

NEWS: The European Handball Federations has published the playing times for the Women’s EHF EURO 2022 with co-hosts Slovenia facing Denmark…