Playing in Europe’s second-tier club competition for the fourth straight season, PAUC Handball are hoping this will be their breakthrough year.

Entering the EHF European League 2021/22 group phase with a squad that recorded its best result in the French league last season – finishing fourth behind champions Paris Saint-Germain HB, Montpellier HB, and HBC Nantes – PAUC are eager to make progress in the continental hierarchy as well.

Main question: Can PAUC take their domestic strength to the European League?

Over the last few seasons, PAUC have been turning into a team that counts in France. The signings of big-name players like William Accambray, Nicolas Claire or Vid Kavticnik have strengthen to young team, which got another impetus with the arrival of former Nantes and Sporting CP coach Thierry Anti in the summer of 2020.

The coach brought everything together and thanks to a stunning start to the 2020/21 season, PAUC finished fourth in the French league for the first time in the club’s history. While the team has not changed much, and Romain Lagarde has added power on the backcourt, it is time for PAUC’s strengths to finally be displayed all over the continent.

Coach Anti is confident that his team can chase after big ambitions in the competition, stating that getting out of the group phase is “the real objective” and that qualifying for the season-ending EHF Finals 2022 would be “extraordinary for us.”

Under the spotlight: Nicolas Claire

The 34-year-old centre back gathered important European experience with HBC Nantes, reaching the Champions League final at the EHF FINAL4 in 2018. Having arrived in Aix the following later, Claire needed some time to settle in his new environment. But with the arrival of Anti – the coach who knows him inside out, having worked with him for almost 10 years – Claire has reached another level. His experience might be key for PAUC this season in the European League.

Playing in Europe for only the fourth season, PAUC are well aware they do not rank among the main trophy candidates.

“The biggest favourites this year, I think of Magdeburg, who won last year against Nantes; Berlin, who are regulars in the European cup competitions; GOG, who also have a very good team; and Benfica, who have just eliminated Rhein-Neckar Löwen,” said Romain Lagarde, who was a Löwen player last season when they hosted the EHF Finals.

Still, PAUC look strong enough for getting out of the group C and qualifying for the knock-out phase.

PAUC are a club that has been growing fast and steady over the past decade. They were still playing in the French second division in 2012, won the title that year and made the headlines for signing star player Nikola Karabatic in 2013, who joined his brother Luka for a few months at the club- PAUC moved into a 7,000-capacity arena in 2017 and first made it into the top five of the French league two years later.

Two – that is the number of former Nantes players who are currently playing at PAUC under former Nantes coach Anti. Nicolas Claire went to the South of France in 2019, Romain Lagarde joined him last summer, arriving from Löwen.

“We are usually unable to sign this kind of player, but Romain was eager to come back to France and there was a real mutual desire to work together again,” Anti said. 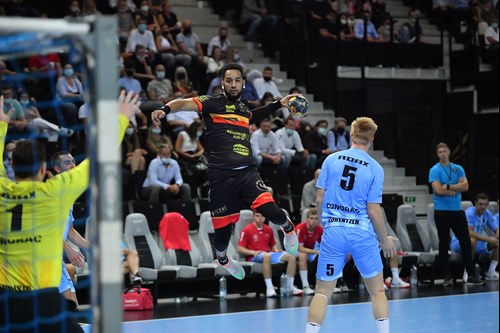 Next Article 20 teams ready to throw off new season

FACTS AND FIGURES: Load up on some interesting information before the European League group phase begins

Big names collide in round 1

ROUND PREVIEW: Opening round is already highlighted by top duels, including defending champions Magdeburg’s journey to Velenje

ROUND PREVIEW: One double-header and nine second-leg encounters will complete the line-up for round 3

Lazar Kukic saves the day for Benfica in Lemgo

GROUP B REVIEW: Thanks to two goals by their Serbian playmaker in the last instants of the game against Lemgo, the Portuguese side opened th…

Hero Gassama in a dream night in Lisbon

GROUP D REVIEW: With emotion until the last second, Sporting CP win by one in Lisbon (29:28) and conquer two points in this European competi…

GROUP D REVIEW: USAM Nimes run over Eurofarm Pelister (21:26) in Macedonia and get the first points in the EHF European League

Presov win thanks to second half opening run

GROUP A REVIEW: Despite a shaky end, TATRAN turn around match against Irun