HBC Nantes and Telekom Veszprém HC know what it means to play in an EHF Champions League final. And both teams certainly want to return to the EHF FINAL4 this season.

However, only one of them will be able to make another trip to Cologne on 12/13 June as the teams are set to meet in the quarter-final.

The first leg in France has been named Match of the Week. Nantes against Veszprém on Thursday 13 May is scheduled for throw-off at 20:45 CEST and will be streamed live on EHFTV with English commentary.

The MOTW coverage sees the game day begin with the Breakfast for Champions series on the official Instagram page of the EHF Champions League. During the day, fans will be able to enjoy exclusive coverage across all EHF Champions League social media channels as well as the live blog on eurohandball.com.

Nantes and Veszprém have played a prominent role in recent years

Both Nantes, who lost the all-French final to Montpellier HB in 2018 in their only visit to the EHF FINAL4 so far, and four-time finalists Veszprém have played a prominent role in the EHF Champions League in recent years.

The Hungarian side was also part of the lastest edition of the EHF FINAL4 – last December, when their hopes of a first title were dashed in the semi-final by eventual champions THW Kiel. 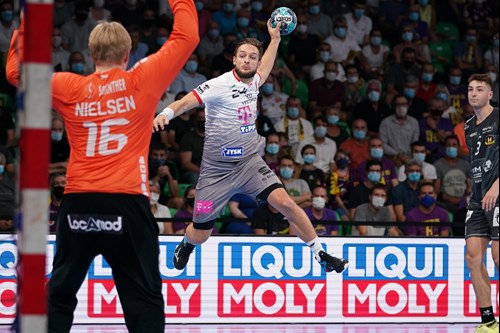 Nantes and Veszprém had not played against each other before this season. Sharing the same group, they did so for the first time in round 1 in September.

That match in France was still level at 14:14 in the 35th minute before the Hungarian side had a strong finish for a 28:24 win. The reverse fixture in Hungary could not be played.

While Veszprém finished runners-up to group winners Barça and eased past former two-time champions HC Vardar 1961 to reach the quarter-final, Nantes entered the play-offs as the sixth-ranked team from group B.

The French side also met a former champion, Lomza Vive Kielce. After losing the home leg by one, Nantes showed remarkable resilience as they advanced with a three-goal win in Poland.

Earlier, Nantes had also won in Kiel and lost only by a single goal in Barcelona.

It will be a clear warning for Veszprém: even if they manage to get a good result in the MOTW in France, they still have to be wary when hosting Nantes in the all-decisive second leg the following week in Hungary.

Next Article Reports from five years of commission work