Despite the war in their homeland, HC Motor have managed to keep on playing handball on professional level.

The Ukrainian champions found a new home in the German city of Düsseldorf over the summer, and are competing in the second Bundesliga division. With a very special season ahead, the club’s goals in the European League are different to other competitors.

How competitive are Motor under these special circumstances?

Many of their former top players such as Aidenas Malasinskas, Viachaslau Bokhan, Barys Pukhouski and Artem Kozakevych have left the club, but some young Ukrainian players arrived. Coach Gintaras Savukynas has the huge task to form a new team, far away from home and during the war. To compete in the second German league provides Motor with a constant playing experience; after several defeats at the start of the season, Motor took their first victory and gained confidence.

"Our sporting goal is to do well in the European League. And of course the season in the second division will help us a lot for that. This experience will help the young players in the team in particular, because it's a strong league in which we can learn a lot and improve,” says Savukynas.

How they rate themselves:

In Motor’s case, it is not only about results, says manager Dmytro Karpushchenko.

“Our team has changed a lot – we have many young players and only three foreigners. The main aim for us this season is that our club and our players survive and to show to all Europe that Ukrainian handball is alive and fighting for Ukraine,” Karpushchenko says.

Team captain Zakhar Denysov adds: “The biggest motivation for us this season is the name of our club and the fact that we are from Ukraine. We represent the biggest aviation enterprise and our city – Zaporizhzhia.”

Denysov rates the German teams as the favourites for the trophy, and for Motor he hopes that “we give all our strength and show our character in every game”.

Under the spotlight: Motor in Germany

In Ukraine, due to the Russian war of aggression, a handball league is currently unthinkable. Nevertheless, Motor’s leaders wanted the team to continue playing. They went in search through Europe, and found what they were looking for in Germany.

“Handball players help handball players” - that is the guiding principle of the German Handball Bundesliga (HBL), which supports Motor’s unusual move. The HBL has granted a one-year guest appearance right to the Ukrainian club, and 20 teams are competing in the second division, with the broad approval of participating clubs. However, HC Motor will play 38 friendly games in Germany, because their results will have no influence on the league decisions at the end of the season. 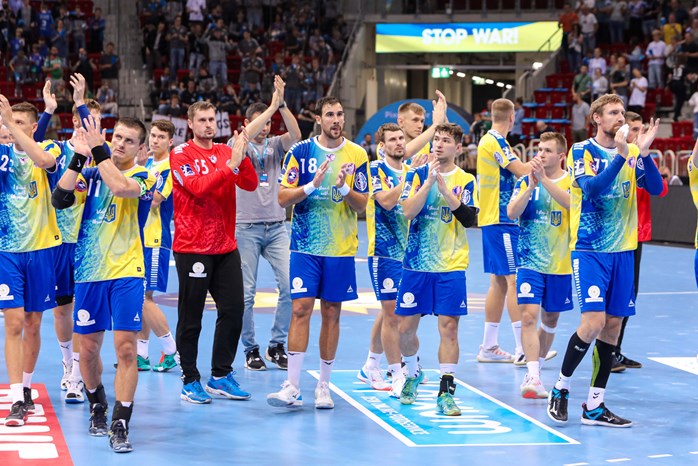 The Ukrainian handball players and their families have found a place to stay in Düsseldorf. The city administration quickly made the decision to support this handball solidarity project.

“For us, HC Motor is a project that is absolutely dear to our hearts and a positive signal to all Ukrainian refugees in Düsseldorf. Our city, with its handball-mad crowd, will welcome this top-class sporting team with a lot of euphoria and ensure a real home game atmosphere,” said Burkhard Hintzsche, city director and sports department head of the city of Düsseldorf.

There is a large Ukrainian community in Düsseldorf. In addition, the city has taken in over 9,000 refugees from Ukraine since the beginning of the war. The handball families from Zaporizhzhia are housed in apartments that are rented and made available by the city of Düsseldorf. The city also helped the club with logistics, including providing Motor with a training hall and the Castello Arena for their matches.

“We were welcomed with open arms in Düsseldorf and are very grateful to be able to keep the game going despite the terrible war in our homeland,” says manager Karpushchenko.

What the numbers say:

Eleven players, mainly from abroad, left the club since the war started, but nine new arrivals – eight of them from other Ukrainian clubs like local rivals ZNTU-ZAB in Zaporizhzhia – came to Germany to rebuild the Motor team.

Ukrainian refugees have free entrance to all Motor matches, including the European League, to help them forget about the war and give support to the club and their country in this very special time.

“I hope that we will show beautiful, emotional and real Ukrainian handball, so that our fans will like our game and will attend every game,” says Ukrainian national team player Oleksandr Kasai.