The starting grid of the teams for the DELO EHF Champions League 2021/22 has been determined as the EHF Executive Committee has confirmed all teams starting in the upcoming edition of Europe’s premier competition.

The 16 participants will start in a group phase with two groups of eight and the playing days will remain to be scheduled for the weekends like in the past. 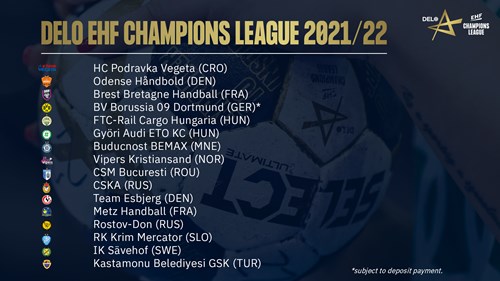 Borussia subject to a deposit payment

As the German club did not play the play-off matches vs Metz in the previous season, a deposit of an amount of €140,000 in two instalments is requested from Dortmund to cover any financial damages or requests for refunds in case the club would not play certain matches or drop out of the competition again. In case no payments are requested neither from the club nor from the EHF in this relation the deposit will be transferred back to the club. The receipt of the two instalments (the first by 13 and the second by 27 July) is a precondition to uphold the participation of the club in the DELO EHF Champions League 2021/22, otherwise, the substitute club (DHK Banik Most) will automatically replace Borussia Dortmund. This would furthermore include that no participation is possible in the European League.

Based on the proposal of the evaluation group the EXEC dealt with 10 requests for upgrades from the second tier EHF European League. Adhering to a criteria system that looked at different fields including venue, TV, spectators, results in past EHF competitions, product management and digital, the EXEC members confirmed six requests for upgrades of the EHF European League clubs to the continent’s top-flight - Team Esbjerg, Metz Handball, Rostov-Don, RK Krim Mercator, Kastamonu Belediyesi GSK and IK Sävehof.

The remaining four requests were not granted, however, the EXEC assigned DHK Banik Most as a substitute team.

The group phase draw will be hosted on Friday 2 July at 11:00 CEST in Vienna and will be streamed live on EHFTV, the Home of Handball YouTube channel and on the Home of Handball Facebook page. The seeding list and the draw procedure of the draw event will be published in the upcoming days.