Go inside Barça with Petrus and Perez de Vargas

On the court, they look like giants who can control the ball with their minds, not with their hands, and do impossible things.

Behind the scenes, behind the players, they are all humans, with feelings, hobbies, passions and, of course, idols.

Our ‘Behind the Scenes with the Champions’ series went to Barcelona to find out more about one of their Brazilian players, Thiagus Petrus, and one of the top goalkeepers in the world, Gonzalo Perez de Vargas.

“The city provides us with an amazing quality of life”

The 32-year-old Brazilian left back is, by definition, a defensive specialist, emerging on the big stage in 2012, when Spanish outfit La Rioja brought him in from Esporte Clube Pinheiros in Brazil.

A no-nonsense defender, Petrus has instantly become a fan-favourite before making the move to MOL-Pick Szeged, the Hungarian powerhouse, where he played between 2015 and 2018.

But when Barça came knocking at the door in 2008, the Brazilian did not hesitate and went back to Spain, to become a key element to the Spanish powerhouse’s system.

“Well, I like everything about it: the quality of life you have here, the main thing being that it is not that cold in the winter,” Petrus says. “And then, of course, there are the facilities that the team has access to. We have everything. The city provides us with an amazing quality of life.”

A multi-national squad, with players from nine different nationalities, can be difficult to gel, as chemistry can easily be disrupted, but Petrus still feels like a fish in the water at Barça. 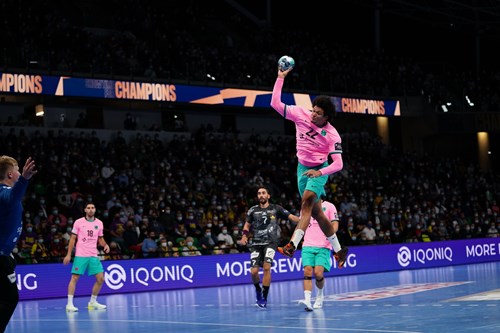 “Well, honestly, I like everything. I get on well with my teammates. Playing and training as a team is going pretty well. And on the road, it is going well, too,” Petrus says. “Especially as there are a lot of Brazilian players in the Liga ASOBAL and then there is the EHF Champions League where we play against all the top teams. So, that is what I like the most, that I can play at the highest level possible.”

A secret handshake between players at Barça is one way of keeping the spirits up and Gonzalo Perez de Vargas is one of the players who really dwelt into it.

“Well, it is a way of getting hyped for the match, a sort of pre-match ritual,” the goalkeeper says. “With some teammates, it stems from a common interest, from a TV series we like and have watched together. With Thiagus, it's pretty normal: He calls me ‘Big Head’ for obvious reasons and I call him ‘Little Thiagus’. So, our names for each other are more standard than some of the others, but there are a lot of different nicknames.”

But Perez de Vargas is not the joker of the team, says Petrus, that role bodes well for right wing Aleix Gomez, the prankster at Barça.

The 30-year-old goalkeeper is one of the most decorated players at Barça, winning two EHF EURO gold medals at a World Championship bronze with Spain, while also securing the EHF Champions League trophy in 2015.

Yet he has seen his share of strange things on the court.

“The strangest thing? That is a tricky one. I have had cheerleaders from another team standing behind me, insulting me,” Peres de Vargas says. “I cannot say who, but I had a teammate who, at the pre-match presentations, handed over his gumshield instead of the club badge.”

Watch the full episode of ‘Behind the Scenes with the Champions’ with Gonzalo Perez de Vargas and Thiagus Petrus on EHFTV, the EHF Champions League Facebook page or the Home of Handball YouTube channel.

Are books or videogames the favourites for these two players? Do they like cats or dogs? Which dishes do they cook? These and other questions, asked by fans through the EHF social media channels, are getting an answer from the two Barça stars.

GROUP B REVIEW: Barça fought off a brave effort from Celje to record their 13th victory from 13 matches in the group phase

NEWS: Overview of matches that have been rescheduled and assessed in the EHF Champions League Men 2020/21

Flensburg come out victorious in crazy Match of the Week

MOTW REVIEW: After leading by nine at half-time, Flensburg had to wait until the very last seconds to secure their win against Paris.

Thirteen is no lucky number for Zagreb

GROUP B REVIEW: Home debut of new coach Ivica Obrvan against Veszprém ends with another defeat

Kiel strike back for a lucky draw

GROUP B REVIEW: HBC Nantes were close to their fourth victory in their last five matches

GROUP A REVIEW: In a game which was undecided until the last fifteen minutes, Kielce came out on top, thanks to a stunning performance by Al…

GROUP B REVIEW: Motor give away 27:25 advantage in the last four minutes and lose to the Danish side for the second time

GROUP A REVIEW: Despite trailing for most of the game, Vardar turned things around to secure their second win this season